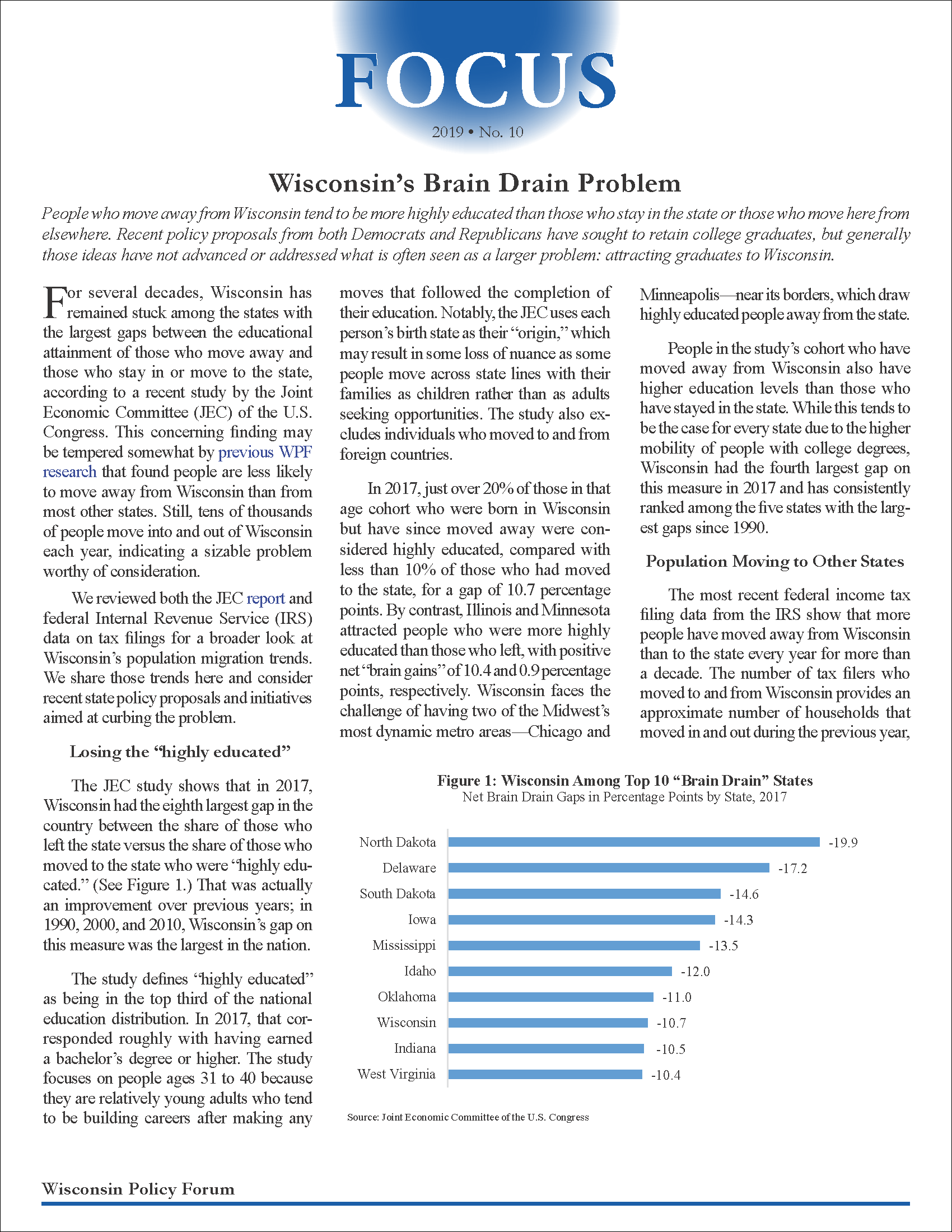 People who move away from Wisconsin tend to be more highly educated than those who stay in the state or those who move here from elsewhere. Recent policy proposals from both Democrats and Republicans have sought to retain college graduates, but generally those ideas have not advanced or addressed what is often seen as a larger problem: attracting graduates to Wisconsin.

For several decades, Wisconsin has remained stuck among the states with the largest gaps between the educational attainment of those who move away and those who stay in or move to the state, according to a recent study by the Joint Economic Committee (JEC) of the U.S. Congress. This concerning finding may be tempered somewhat by previous WPF research that found people are less likely to move away from Wisconsin than from most other states. Still, tens of thousands of people move into and out of Wisconsin each year, indicating a sizable problem worthy of consideration.

We reviewed both the JEC report and federal Internal Revenue Service (IRS) data on tax filings for a broader look at Wisconsin’s population migration trends. We share those trends here and consider recent state policy proposals and initiatives aimed at curbing the problem.

The JEC study shows that in 2017, Wisconsin had the eighth largest gap in the country between the share of those who left the state versus the share of those who moved to the state who were “highly educated.” (See Figure Below) That was actually an improvement over previous years; in 1990, 2000, and 2010, Wisconsin’s gap on this measure was the largest in the nation.

The study defines “highly educated” as being in the top third of the national education distribution. In 2017, that corresponded roughly with having earned a bachelor’s degree or higher. The study focuses on people ages 31 to 40 because they are relatively young adults who tend to be building careers after making any moves that followed the completion of their education. Notably, the JEC uses each person’s birth state as their “origin,” which may result in some loss of nuance as some people move across state lines with their families as children rather than as adults seeking opportunities. The study also excludes individuals who moved to and from foreign countries.

In 2017, just over 20% of those in that age cohort who were born in Wisconsin but have since moved away were considered highly educated, compared with less than 10% of those who had moved to the state, for a gap of 10.7 percentage points. By contrast, Illinois and Minnesota attracted people who were more highly educated than those who left, with positive net “brain gains” of 10.4 and 0.9 percentage points, respectively. Wisconsin faces the challenge of having two of the Midwest’s most dynamic metro areas – Chicago and Minneapolis – near its borders, which draw highly educated people away from the state.

People in the study’s cohort who have moved away from Wisconsin also have higher education levels than those who have stayed in the state. While this tends to be the case for every state due to the higher mobility of people with college degrees, Wisconsin had the fourth largest gap on this measure in 2017 and has consistently ranked among the five states with the largest gaps since 1990.

Population Moving to Other States

The most recent federal income tax filing data from the IRS show that more people have moved away from Wisconsin than to the state every year for more than a decade. The number of tax filers who moved to and from Wisconsin provides an approximate number of households that moved in and out during the previous year, while the number of exemptions claimed by those tax filers provides an approximate number of total people who did so. The IRS data provide a more comprehensive picture of migration trends because they include people of all ages and education levels, though it is important to note that not everyone files a federal income tax return.

While net population loss from migration is concerning, the state’s “brain drain” problem applies to larger numbers of people moving into and out of the state. The IRS data show that between 2006 and 2016, an average of 82,965 people moved away from Wisconsin each year, while an average of 76,560 moved into the state annually. (See Figure Below) These numbers include retirees and people who are too young to have completed their education, but they nevertheless provide context for the scale of migration activity occurring in Wisconsin.

Recent proposals on both sides of the political aisle have aimed to combat Wisconsin’s brain drain problem by providing financial incentives to the state’s college graduates. Although neither advanced, the issue is generating debate.

During his 2018 campaign for reelection, then Governor Walker proposed annual tax breaks of $1,000 for up to five years for new graduates who earn at least an associate degree and stay in the state. At a time when nearly two-thirds of Wisconsin college graduates are leaving school with debt, and the state’s average student loan debt is nearly $30,000, some Democrats argued the governor’s proposed incentives were too modest to retain graduates.

Also during the last campaign for governor, Democratic primary contender Andy Gronik proposed a similar though more far-reaching plan. Under his proposal, recent college graduates living and working in Wisconsin would have been able to apply the amount they owed each year in state income taxes to their loan debt until their loans were fully repaid. At the time, GOP critics argued the proposal lacked details such as how many graduates would participate and how much the proposal would cost.

While these proposals focused on using state income taxes to incentivize people to stay in Wisconsin, that is just one approach that could increase the number of college-educated residents. Other strategies could focus on expanding job opportunities and increasing wages, which are key factors driving where young college graduates choose to live. Our previous research showed that wages trail the national median in Wisconsin in several occupations that require a college degree, including engineering.

Efforts might also focus on attracting college graduates. Wisconsin already has relatively strong population retention, but its low rate of in-migration from other states is a key driver of net migration loss. One attraction effort was the state’s $6.8 million marketing campaign in 2018 and 2019 aimed at drawing millennials from the Chicago area, veterans, and graduates of Wisconsin colleges and universities who have since moved away. The Wisconsin Economic Development Corporation hoped to continue and expand that initiative, but critics argued it was ineffective and Governor Evers did not include it in his proposed budget.

Determining the most effective set of strategies for addressing this problem is critical to attracting and retaining people to fill higher-paying jobs in the state, which typically require high levels of education. Those workers are also essential to fueling innovation and growth and to ensuring the state can compete in the increasingly global and knowledge-based economy.

"A plan to build housing with net-zero energy consumption was her dream. It's coming true on a vacant lot in downtown Green Bay." [1]Green Bay Press Gazette
Source URL: https://wispolicyforum.org/research/wisconsins-brain-drain-problem/