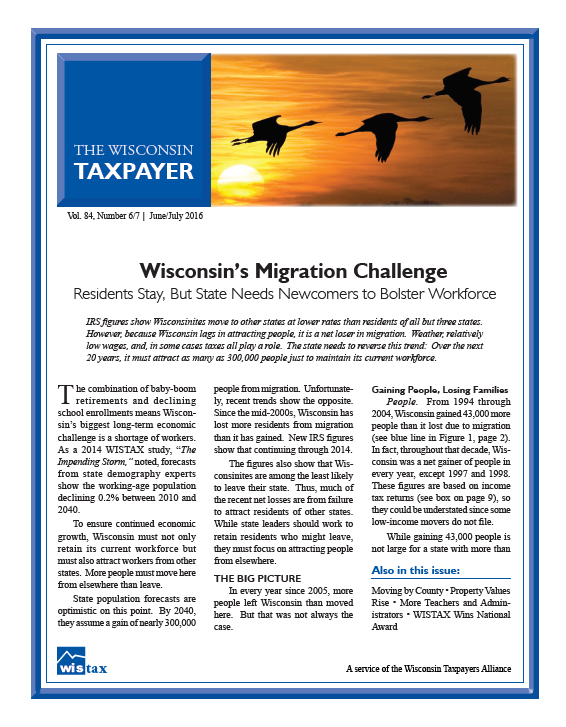 IRS figures show Wisconsinites move to other states at lower rates than residents of all but three states. However, because Wisconsin lags in attracting people, it is a net loser in migration. Weather, relatively low wages, and, in some cases taxes all play a role. The state needs to reverse this trend: Over the next 20 years, it must attract as many as 300,000 people just to maintain its current workforce.

The combination of baby-boom retirements and declining school enrollments means Wisconsin’s biggest long-term economic challenge is a shortage of workers. As a 2014 WISTAX study, “The Impending Storm,” noted, forecasts from state demography experts show the working-age population declining 0.2% between 2010 and 2040.
To ensure continued economic growth, Wisconsin must not only retain its current workforce but must also attract workers from other states. More people must move here from elsewhere than leave.
State population forecasts are optimistic on this point. By 2040, they assume a gain of nearly 300,000 people from migration. Unfortunately, recent trends show the opposite. Since the mid-2000s, Wisconsin has lost more residents from migration than it has gained. New IRS figures show that continuing through 2014.
The figures also show that Wisconsinites are among the least likely to leave their state. Thus, much of the recent net losses are from failure to attract residents of other states. While state leaders should work to retain residents who might leave, they must focus on attracting people from elsewhere.