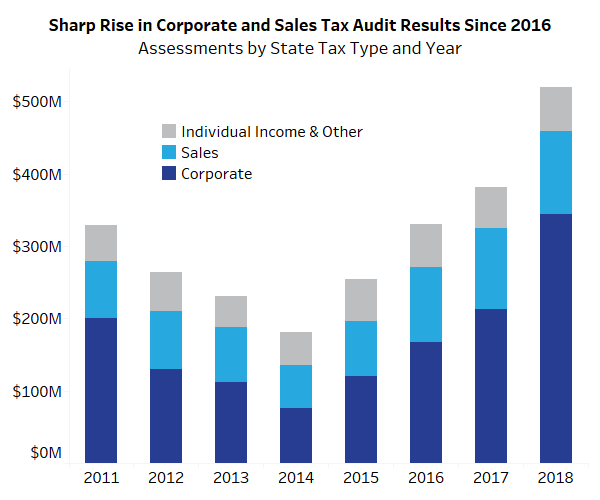 Despite COVID-19’s severe economic impact, state corporate tax collections remained strong in the most recent fiscal year, rising 20.2%. Normally among the first revenues to decline in a recession, corporate taxes have been an unusual bright spot during the current downturn and a state audit initiative may help explain why.

Corporate tax revenues for the recently ended 2020 fiscal year totaled $1.61 billion and topped the 2019 total by $269.8 million, according to preliminary figures from the non-partisan Legislative Fiscal Bureau (LFB). Though many factors drive corporate collections, LFB memos and other recent reports provide one underappreciated reason why these tax revenues have remained robust: increased auditing by the state in recent years. Corporate audit proceeds as of June were running $191 million higher than the previous year due to the receipt of several large audit payments to the state since January.

The increase in fiscal 2020 (running July 2019 to June 2020) is even more remarkable given the fact that corporate and franchise taxes had already grown in 2019 at their fastest rate in more than a half century. Those revenues have helped offset some of the overall weakness in state tax collections amid the pandemic, with 2020 corporate tax collections beating the state’s projections by 7% despite the recession.

An initiative now in its fifth year to expand the number of state auditors is generating additional corporate and sales taxes from out-of-state businesses or their Wisconsin customers. State Department of Revenue (DOR) reports show the program has more than paid for the cost of the auditors and has exceeded its four-year revenue target of $277.5 million by $61.6 million because of large collections in 2019. These payments may reflect, in part, amounts that were assessed in previous years but took time to collect.

To boost efforts to collect sales taxes and corporate income and franchise taxes owed or remitted by out-of-state businesses, lawmakers and Gov. Scott Walker in the 2015-17 state budget (2015 Act 55) provided an additional $11.8 million in 2016 and $13.6 million each year after that. As a result, the state added 102 total positions and raised DOR’s overall frontline audit staff to 388, according to the agency and LFB. The additional auditors have contributed to a rise in state tax assessments in recent years (see Figure 1).

The Audit 2020 initiative in Act 55 focused on four areas:

The additional auditors authorized in Act 55 included front-line audit staff, managers, and support positions. DOR officials at the time estimated the new staff would generate additional state taxes of $31.5 million in 2016 and $82 million per year beginning in 2017.

In the 2017-19 budget, Walker and lawmakers reduced DOR’s overall staffing but also added 38 billing and collections agents at a cost of $1.8 million in 2018 and $2.5 million in 2019. The administration estimated DOR would collect $64 million in additional revenues over the next two years through additional delinquent tax collection, bill processing, and debt collection.

Reports required by lawmakers show the Act 55 positions generated $26.9 million in 2016, easily covering their cost but falling short of the goal by about $4.6 million (see Figure 2). The agency attributed the shortfall to the time it takes to actually collect additional amounts assessed through corporate audits.

In 2017 and 2018, the state again covered its costs but fell somewhat short of hitting the $82 million annual goal. However, in a sign of the potential collections to come there was an additional $319.9 million in assessments pending payment or appeal resolution as of June 30, 2018.

The program generated $159.9 million in 2019, with an additional $857 million in assessments pending payment or appeal as of June 30, 2019. The amount collected compared to the amount spent was 11.8 to 1, according to DOR. As noted earlier, the LFB has said that corporate audit payments were also up substantially in 2020 though final numbers are not yet available.

In addition, the 38 billing and collections agents approved in the 2017-19 budget brought in $35.9 million in 2018 and $27.3 million in 2019, beating their goal over the two years combined by $12.7 million. One open question, however, is whether revenues from audits, collections, or both will be affected by COVID-19 in 2021. DOR officials say they have allowed audit extensions during the pandemic but generally have been able to continue auditing with online tools. They indicate that 2021 results will depend less on the coronavirus and more on the typical factors of when audits reach completion, resolve appeals, and result in payment.

The future is likely to bring more discussion of adding or maintaining auditors at the state level as well as within the federal government, where audit staffing and rates have fallen. In Wisconsin, the audit initiative was questioned by conservatives and business groups during the Walker administration and they have continued to be skeptical. Last year, GOP lawmakers rejected a budget proposal by Gov. Tony Evers to add 36 more audit and collection positions at DOR to increase enforcement of the new Wayfair rules and keep up with the agency’s overall workload.

On the one hand, businesses will often have concerns about the costs of complying with audits as well as any resulting additional taxes they may deem unfair. Though the additional audits focus on out-of-state firms, they could still have effects on Wisconsin residents such as an impact to the business climate or more sales taxes being paid by consumers here on transactions with out-of-state companies.

On the other hand, if the taxes owed by some businesses go unpaid, then other businesses and state residents must either pay more or receive fewer public services. One good example is tax collections from certain online sales, which as we recently noted can result in automatic cuts to state income taxes.

Good policy depends not only on having sound laws and rules but also on the right level of enforcement to ensure compliance but avoid undue burdens. The results from the past five years of enhanced auditing in Wisconsin are worth considering as policymakers set standards and staffing in the years to come.