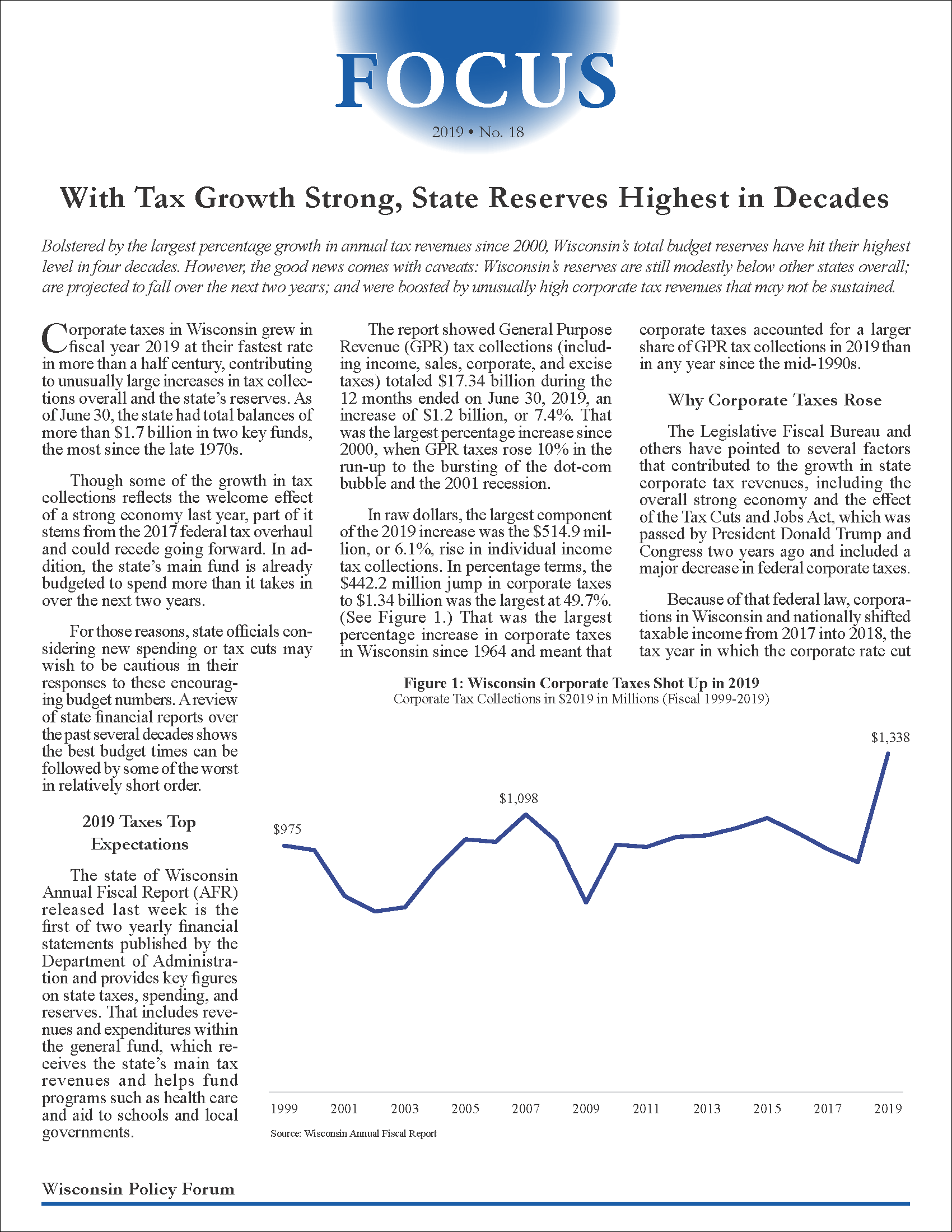 Bolstered by the largest percentage growth in annual tax revenues since 2000, Wisconsin’s total budget reserves have hit their highest level in four decades. However, the good news comes with caveats: Wisconsin’s reserves are still modestly below other states overall; are projected to fall over the next two years; and were boosted by unusually high corporate tax revenues that may not be sustained.

Corporate taxes in Wisconsin grew in fiscal year 2019 at their fastest rate in more than a half century, contributing to unusually large increases in tax collections overall and the state’s reserves. As of June 30, the state had total balances of more than $1.7 billion in two key funds, the most since the late 1970s.

Though some of the growth in tax collections reflects the welcome effect of a strong economy last year, part of it stems from the 2017 federal tax overhaul and could recede going forward. In addition, the state’s main fund is already budgeted to spend more than it takes in over the next two years.

For those reasons, state officials considering new spending or tax cuts may wish to be cautious in their responses to these encouraging budget numbers. A review of state financial reports over the past several decades shows the best budget times can be followed by some of the worst in relatively short order.

The state of Wisconsin Annual Fiscal Report (AFR) released last week is the first of two yearly financial statements published by the Department of Administration and provides key figures on state taxes, spending, and reserves. That includes revenues and expenditures within the general fund, which receives the state’s main tax revenues and helps fund programs such as health care and aid to schools and local governments.

The report showed General Purpose Revenue (GPR) tax collections (including income, sales, corporate, and excise taxes) totaled $17.34 billion during the 12 months ended on June 30, 2019, an increase of $1.2 billion, or 7.4%. That was the largest percentage increase since 2000, when GPR taxes rose 10% in the run-up to the bursting of the dot-com bubble and the 2001 recession.

The Legislative Fiscal Bureau and others have pointed to several factors that contributed to the growth in state corporate tax revenues, including the overall strong economy and the effect of the Tax Cuts and Jobs Act, which was passed by President Donald Trump and Congress two years ago and included a major decrease in federal corporate taxes.

Because of that federal law, corporations in Wisconsin and nationally shifted taxable income from 2017 into 2018, the tax year in which the corporate rate cut took effect. That had the effect of lowering their taxes in 2017 and increasing them in 2018 beyond what they would have otherwise been. (The state’s 2019 fiscal year includes the final six months of calendar year 2018.)

In response to the federal legislation, then Gov. Scott Walker and lawmakers changed state law in December 2018 to allow certain business entities to pay income taxes at the corporate level rather than pass their profits on to shareholders for them to pay individual income taxes. Paying taxes at the corporate level could help these businesses gain more federal tax deductions, but also means they would be taxed at the state corporate rate of 7.9%, which is higher than any of the rates in Wisconsin’s individual income tax brackets.

Some of these factors that boosted corporate taxes over the past year won’t necessarily recur, including companies’ decisions to shift taxable income into tax year 2018. As a result, corporate taxes in Wisconsin are estimated to be lower in fiscal 2020, though preliminary numbers for the first three months of this fiscal year have yet to bear out the projected decrease.

In 2019, state GPR expenditures (not including transfers from the general fund to other funds) rose by $720.5 million, or 4.4%, to $17.15 billion. The biggest dollar increases came in the areas of state aid to local schools ($283.1 million), state credits and payments to lower local property taxes ($167.9 million), and Medicaid health care for the needy ($84 million). For more, see our interactive charts.

Because of the strong growth in tax collections, the state could cover the higher spending and still add to reserves. The general fund balance as of June 30 rose 84.7% over the prior year to $1.09 billion, the highest general fund surplus since 2000 after adjusting for inflation.

In addition, the state more than doubled the money in its rainy day fund, with the total as of June 30 rising to $649.1 million from $320.1 million a year before. The rainy day fund, also known as the budget stabilization fund, receives deposits when state revenues come in above expectations so that the money can be used during difficult economic times when state revenues fail to meet projections.

As Figure 2 shows, adding up the general fund and rainy day fund balances yields a total of $1.74 billion in reserves. That amounts to a little under 10% of GPR expenditures in 2019, a share that represents the highest reserve level for the state of Wisconsin since 1978. The combined reserves are enough to cover the state’s current budgeted spending levels for about five weeks.

These numbers are clearly positive, but a word of caution is in order. First, Wisconsin’s 2019 reserves are still somewhat lower than the median state reserves of 10.8% of general fund expenditures, as collected last spring by the National Association of State Budget Officers.

Second, the 2019-2021 state budget and related legislation approved by Gov. Tony Evers and lawmakers is projected to lower the general fund balance over the next two years by more than $800 million to help pay for priorities such as income tax cuts and increased aid to schools. Last, the national discussion on the economy has been marked by recent concerns over a slowdown, particularly in the manufacturing sector that is so critical in Wisconsin.

Clearly, fiscal 2019 was one of the state’s best years in decades. However, some other very strong years, including 2000, were followed by recessions and difficult state budgets. The state’s current financial strength and its past challenges are both worth remembering as officials chart Wisconsin’s fiscal path moving forward.