In the April election, Wisconsin voters again approved the vast majority of school district referenda to increase local property taxes, despite the economic uncertainty linked to the COVID-19 pandemic. Since 2016, nearly two-thirds of all school districts across the state have passed referenda to exceed state-imposed caps on revenue, with high rates of approval extending across urban, suburban, and rural districts.

Wisconsin voters approved more than $1.7 billion in property tax increases for their local school districts through referenda passed in the April general election. The approval rate was 87% (52 of the 60 referenda were approved), marking the latest in a largely consistent trend of higher levels of voter approval for school referenda. (See Figure 1.)

It must be noted that most of the $1.7 billion approved in the April election came from one large referendum: a $1 billion, 30-year ballot question for the Racine Unified School District (RUSD), which passed by four votes. A recount has been completed but an appeal of the outcome is likely.

Drawing conclusions from this election also is challenging because it occurred amid unprecedented circumstances created by the COVID-19 crisis. Taking a longer view, however, we find that the higher rate of referenda approvals in recent years comes after a decade in which Wisconsin school districts have seen their main sources of revenues outpaced by inflation.

Approval of these referenda give districts authority to exceed state caps on the revenue they may collect through their combined local property taxes and general state aid. Districts may seek to exceed these caps to issue and make payments on debt for capital building projects or to fund operations. Operating referenda may be non-recurring, meaning they expire at some point, or recurring, which do not.

Of the 52 referenda approved in the April election, 25 were for issuing debt totaling $485 million. Twenty-seven were for operations, of which 21 were non-recurring referenda totaling $1.16 billion and six were recurring, totaling $97 million.

While the RUSD referendum is non-recurring, it is important to note it extends through the 2049-50 school year and the proceeds will be used for both operating and capital purposes. In fact, the referendum question specified that the funds will be used for “building modernization, land acquisition, enhancements for student career pathway programs, safety improvements, furnishings and equipment, technology, and debt service for new building and other capital improvement projects.”

Our analysis shows districts collectively have seen their two principal revenue sources increase more slowly than inflation during the last decade, though individual district finances may vary. This overall trend, in turn, may be contributing to a push by many districts to ask voters to increase property taxes to exceed state revenue limits.

We find that from the 2009-10 school year through 2018-19, inflation rose 17%. Meanwhile, the statewide average revenue limit per pupil for districts increased by $570, or 6%, from $10,107 to $10,677. That figure covers all general state aid and property tax revenues, including referenda and other exceptions allowed under the law.

During those years, the state did provide additional funding outside of the revenue limits in the form of per pupil aid. This form of funding was created in 2012-13 and by 2018-19 totaled $654 per pupil. That closed more than half of the gap between the statewide revenue limit and inflation, but not all of it.

Another important factor that offset some of the impacts of slow revenue growth was 2011 Act 10. The legislation enabled districts to significantly lower personnel costs in areas such as health insurance and pension contributions.

Figure 2 shows annual revenue limit increases from 1993 to the present, as well as the decrease that occurred in 2011-12 amid state budget challenges and Act 10. It also includes the per pupil aid adjustments beginning in 2012-13.

One factor that can make it harder for districts to cover their ongoing costs is declining enrollments that over time can lead to less revenue allowed under the per pupil state limits. That said, a number of the districts that approved referenda since 2016 saw an increase in enrollments over the past decade.

Those years have also been marked by a shift in public opinion on school funding. Polling by Marquette University Law School, including surveys conducted as recently as February, showed a shift in voter preference – with more prioritizing increasing school spending over reducing property taxes.

While it is not possible to know for certain why the approval rate for school referenda has trended upward during the last five years, all of these factors should be considered. Since 2016, nearly two-thirds – or 267 of the state’s 422 school districts – have seen their voters approve referenda to authorize local property tax increases by a combined sum of more than $7 billion. This included about $4.8 billion in debt referenda, $2.1 billion in non-recurring operating referenda, and $192.6 million in recurring operating referenda. Many of these districts saw their voters endorse multiple referenda since 2016, as a total of 412 were approved in this timespan. 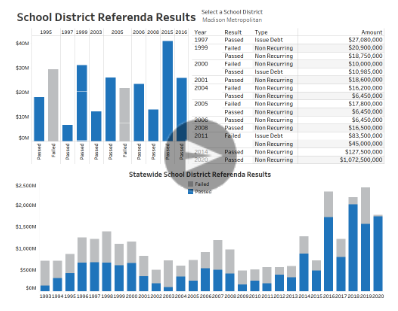 Increased rates of referenda approval have applied to both operating and debt referenda. Both were approved at a rate of about 52% in the period from 2000 to 2015. Since 2016, approval for debt referenda has climbed to about 78%, and to about 83% for operating referenda. To see referenda results by district going back to 1993, click here to go to the tool below.

High rates of referenda approval extend across all parts of the state. Using locale classifications developed by the National Center for Education Statistics to classify all districts – city, suburban, town or rural – all four in Wisconsin have seen referenda approval rates of 75% or higher since 2016.

Our previous research also suggested a link between approval rates for school referenda and economic conditions at the time the question was put to voters, with approval rates higher in periods of economic growth. The premise is reasonable – in better economic times voters may feel better able to take on higher taxes.

The results from the April election are difficult to evaluate in this framework. The period since the Great Recession has seen steady economic growth, but that has abruptly ended amid the fallout from the COVID-19 crisis.

It is possible that voters – some of whom cast their ballots early – either were uncertain about the long-term economic implications of the crisis or chose not to prioritize them in making their decision to support school referenda. Another potential factor is that a Democratic presidential primary held in the April election drove turnout among voters more likely to support school referenda.

But other dynamics that we documented in past research raise questions about whether the trend will continue. Amid the COVID-19 crisis, the state and world are entering an economic downturn of unknown length and severity. For voters whose appetites for property tax increases might be dampened by this, the implications of the crisis are likely to become more evident as the year unfolds.

Furthermore, the number of districts that have gone to referendum in the last five years means there is a decreasing number that could do so again without risking questions from taxpayers who could rightly note they approved a prior referendum only a relatively short time ago.

Yet, at the same time, other potential implications of the COVID-19 crisis are its negative impact on existing school district budgets and how it could affect future state funding for schools. Those questions – which we will examine more closely in an upcoming report – also may weigh on the minds of voters.

Whatever the future holds, recent trends on school referenda and what they convey about voter attitudes are one factor for policymakers to consider as they wrestle with huge budgetary challenges in the months ahead. They suggest many Wisconsin voters want to ensure their local schools have adequate financial resources, even if it means dipping into their own pockets to do so at a time of crisis.