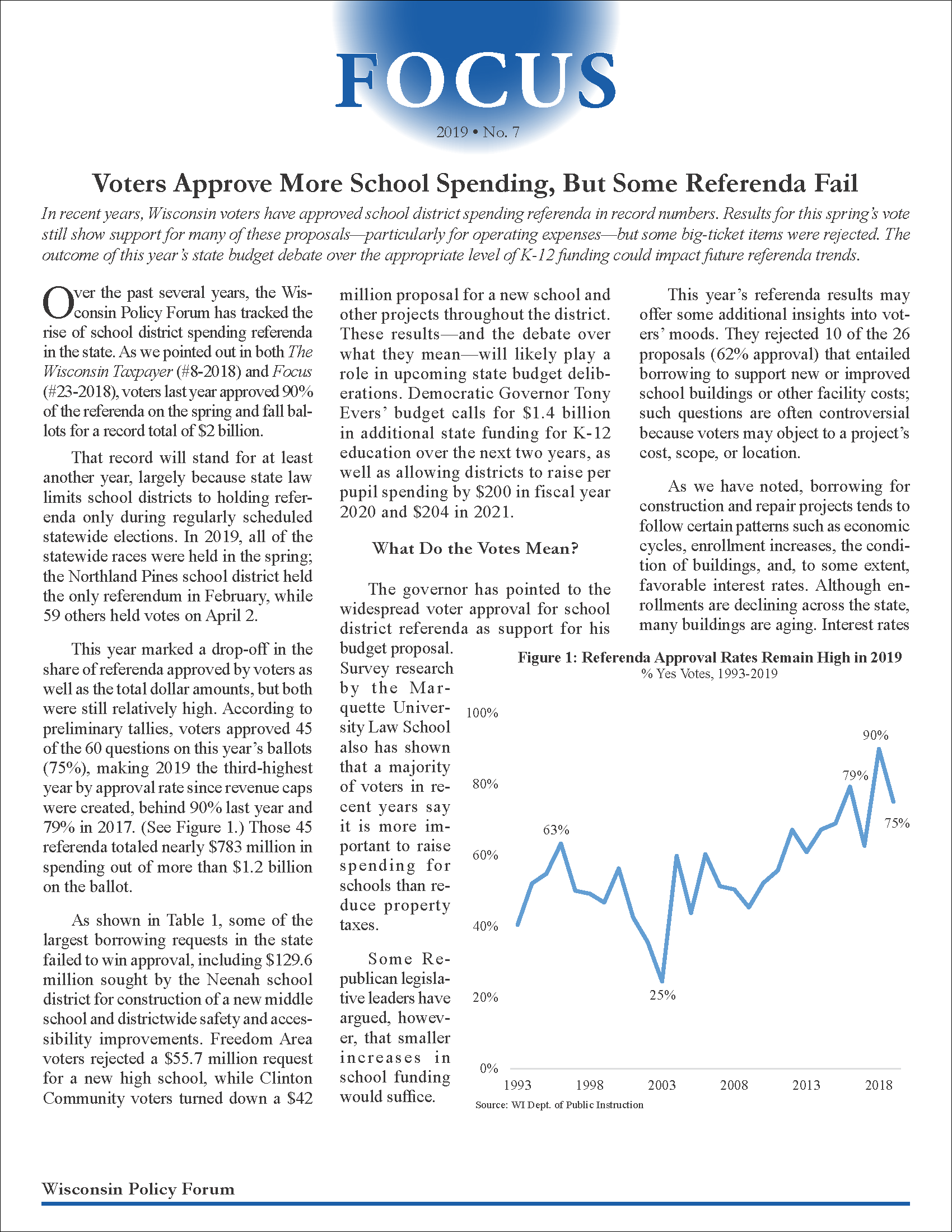 In recent years, Wisconsin voters have approved school district spending referenda in record numbers. Results for this spring’s vote still show support for many of these proposals—particularly for operating expenses—but some big-ticket items were rejected. The outcome of this year’s state budget debate over the appropriate level of K-12 funding could impact future referenda trends.

Over the past several years, the Wisconsin Policy Forum has tracked the rise of school district spending referenda in the state. As we pointed out in both The Wisconsin Taxpayer (#8-2018) and Focus (#23-2018), voters last year approved 90% of the referenda on the spring and fall ballots for a record total of $2 billion.

That record will stand for at least another year, largely because state law limits school districts to holding referenda only during regularly scheduled statewide elections. In 2019, all of the statewide races were held in the spring; the Northland Pines school district held the only referendum in February, while 59 others held votes on April 2.

This year marked a drop-off in the share of referenda approved by voters as well as the total dollar amounts, but both were still relatively high. According to preliminary tallies, voters approved 45 of the 60 questions on this year’s ballots (75%), making 2019 the third-highest year by approval rate since revenue caps were created, behind 90% last year and 79% in 2016. (See Figure 1.) Those 45 referenda totaled nearly $783 million in spending out of more than $1.2 billion on the ballot.

As shown in Table 1, some of the largest borrowing requests in the state failed to win approval, including $129.6 million sought by the Neenah school district for construction of a new middle school and districtwide safety and accessibility improvements. Freedom Area voters rejected a $55.7 million request for a new high school, while Clinton Community voters turned down a $42 million proposal for a new school and other projects throughout the district. These results—and the debate over what they mean—will likely play a role in upcoming state budget deliberations. Democratic Governor Tony Evers’ budget calls for $1.4 billion in additional state funding for K-12 education over the next two years, as well as allowing districts to raise per pupil spending by $200 in fiscal year 2020 and $204 in 2021.

What Do the Votes Mean?

The governor has pointed to the widespread voter approval for school district referenda as support for his budget proposal. Survey research by the Marquette University Law School also has shown that a majority of voters in recent years say it is more important to raise spending for schools than reduce property taxes.

Some Republican legislative leaders have argued, however, that smaller increases in school funding would suffice.

This year’s referenda results may offer some additional insights into voters’ moods. They rejected 10 of the 26 proposals (62% approval) that entailed borrowing to support new or improved school buildings or other facility costs; such questions are often controversial because voters may object to a project’s cost, scope, or location.

As we have noted, borrowing for construction and repair projects tends to follow certain patterns such as economic cycles, enrollment increases, the condition of buildings, and, to some extent, favorable interest rates. Although enrollments are declining across the state, many buildings are aging. Interest rates are also relatively low at present and the state continues to benefit from a growing economy, which may make voters more willing to raise taxes.

On the other hand, voters were much more likely this year to support exceeding state-imposed revenue caps for district operating expenses, either permanently or for a limited period. They approved six of the seven referenda (86%) to exceed the revenue caps on an ongoing, or recurring basis, raising annual spending by $10.1 million. Referenda to exceed the caps on a nonrecurring basis for periods up to five years won in 23 of the 27 districts (85%) where they were held, raising spending by $111.5 million for the approved periods.

The nonrecurring referenda rejected by voters included the two largest such questions: $29.9 million requested for five years’ operating costs in Kettle Moraine and $25 million for the same period in New Berlin. Voters also rejected a four-year $11.5 million referendum in the Palmyra-Eagle district, where school officials had warned they might have to dissolve the district if it did not pass.

Most of the referenda on this year’s ballots were scheduled before the governor had introduced his budget and it is still unclear how much state aid to schools may go up over the next two years.

Majority Republicans in the Assembly and Senate have indicated they are unlikely to adopt all of the governor’s K-12 funding proposals. They have, however, previously voiced support for increasing funds for special education and providing targeted increases for schools with declining enrollments.

Lawmakers may feel some additional pressure to provide more aid to schools to hold down property tax increases resulting from referenda. Once the budget is adopted later this year, one test of whether taxpayers and schools believe they have sufficient funding going forward may be the number, dollar amount, and voter approval rates of referenda in 2020.

Check out our interactive dashboards that provide more school referenda figures, including district by district data.