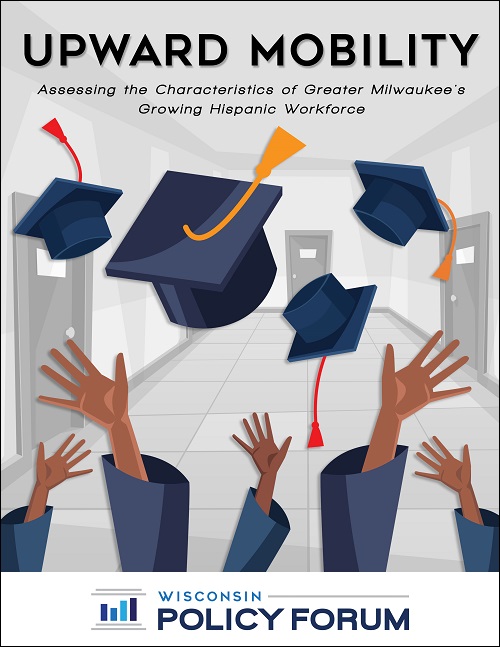 The rapid growth of metro Milwaukee’s Hispanic population could not have come at a more opportune time, providing the region with an increasing supply of new workers to offset retirements from the massive baby boom generation. Yet, despite this good fortune, there is much that local policymakers and business leaders do not know about the role of Hispanic workers in the regional economy.

For example, how does the region’s Hispanic workforce compare with the general workforce with regard to educational attainment, occupational concentrations, and wages? How do the college choices and outcomes of young Hispanic adults in Milwaukee compare with trends in the regional economy?

This report – commissioned by the Hispanic Professionals of Greater Milwaukee – seeks to answer those and related questions to assist regional leaders in their efforts to craft effective workforce development strategies. Overall, our analysis reveals two overarching findings:

Yet, Hispanics are highly underrepresented in every occupational category that pays a median annual wage of $60,000 or higher, including several that are among the fastest-growing in the region. Those include management, business and financial operations, healthcare practitioners, and computer and mathematical occupations. Hispanics are also underrepresented as business owners.

For each occupational category in the chart below, the orange bar represents the concentration of Hispanic workers relative to workers overall, while the blue circle represents median annual wages for all workers in metro Milwaukee. Among the occupations in which Hispanic workers are employed at an equal or higher rate than the workforce overall (a concentration of 1.0 or higher), construction is the only one that pays a median annual wage of at least $40,000.

Our analysis of 2007-2017 Milwaukee Public Schools (MPS) graduates shows Hispanic students have enrolled in college at lower rates than African-American, Asian, and white students. Among those MPS graduates who have completed college, Hispanics are less likely than non-Hispanics to have earned a bachelor’s or advanced degree (45.4% vs. 61.1%), which are often needed to qualify for positions in higher-wage occupations. This analysis included 45,319 graduates of MPS traditional and charter high schools, including 8,477 Hispanic graduates.

Hispanic college graduation rates are also considerably lower than overall graduation rates at several area institutions, including UWM, which serves the highest numbers of Hispanic students in the area. (See chart on the following page.) They are also low compared with Hispanic graduation rates at each of those institutions’ national peers. University leaders have acknowledged this challenge and are making a number of efforts to address it. Nevertheless, we believe this issue merits their close attention, and potentially, additional actions.

Notably, it is difficult and potentially misleading to compare graduation rates of area colleges and universities due to the many differences between institutions. For example, as a public access university, UWM accepts a very high percentage of its applicants (86%), which results in more UWM students needing assistance to be successful than at more selective institutions. Rather than comparing area institutions with one another, our analysis focuses on the graduation rate of Hispanic students versus all students at each institution.

There are some bright spots in the data. For example, the share of metro Milwaukee’s Hispanic adults who have at least a high school diploma (or equivalent) increased from 59.7% in 2007 to 71.4% in 2017. Those with at least a bachelor’s degree increased by four percentage points during the same period.

Yet, overall, our findings raise concerns about the likelihood that Hispanic representation in high-wage occupations in metro Milwaukee will increase greatly in the near future. This is problematic given that the Hispanic population continues to fuel growth in metro Milwaukee and that its success is critical to the region’s long-term economic destiny.

Civic and educational leaders and policymakers are working to prepare metro Milwaukee’s workforce for the increasingly knowledge-based 21st century economy. To do so effectively, those efforts must ensure that the region’s fastest-growing demographic — the Hispanic population — is achieving at the same rate or better than the overall population. We hope this research will inform area leaders as they deliberate education and workforce development strategies to achieve that objective.