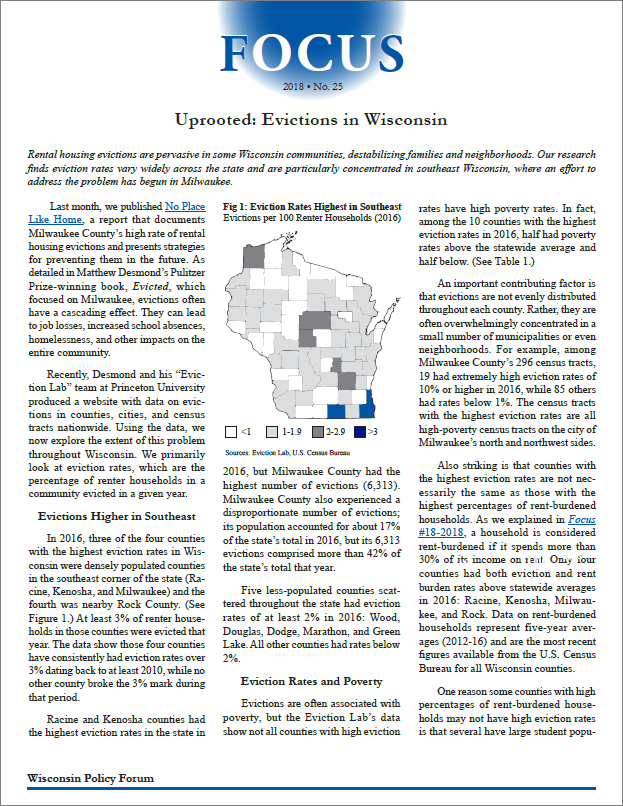 Rental housing evictions are pervasive in some Wisconsin communities, destabilizing families and neighborhoods. Our research finds eviction rates vary widely across the state and are particularly concentrated in southeast Wisconsin, where an effort to address the problem has begun in Milwaukee.

Last month, we published No Place Like Home, a report that documents Milwaukee County’s high rate of rental housing evictions and presents strategies for preventing them in the future. As detailed in Matthew Desmond’s Pulitzer Prize-winning book, Evicted, which focused on Milwaukee, evictions often have a cascading effect. They can lead to job losses, increased school absences, homelessness, and other impacts on the entire community.

Recently, Desmond and his “Eviction Lab” team at Princeton University produced a website with data on evictions in counties, cities, and census tracts nationwide. Using the data, we now explore the extent of this problem throughout Wisconsin. We primarily look at eviction rates, which are the percentage of renter households in a community evicted in a given year.

In 2016, three of the four counties with the highest eviction rates in Wisconsin were densely populated counties in the southeast corner of the state (Racine, Kenosha, and Milwaukee) and the fourth was nearby Rock County. (See Map) At least 3% of renter households in those counties were evicted that year. The data show those four counties have consistently had eviction rates over 3% dating back to at least 2010, while no other county broke the 3% mark during that period.

Racine and Kenosha counties had the highest eviction rates in the state in 2016, but Milwaukee County had the highest number of evictions (6,313). Milwaukee County also experienced a disproportionate number of evictions; its population accounted for about 17% of the state’s total in 2016, but its 6,313 evictions comprised more than 42% of the state’s total that year.

Five less-populated counties scattered throughout the state had eviction rates of at least 2% in 2016: Wood, Douglas, Dodge, Marathon, and Green Lake. All other counties had rates below 2%.

An important contributing factor is that evictions are not evenly distributed throughout each county. Rather, they are often overwhelmingly concentrated in a small number of municipalities or even neighborhoods. For example, among Milwaukee County’s 296 census tracts, 19 had extremely high eviction rates of 10% or higher in 2016, while 85 others had rates below 1%. The census tracts with the highest eviction rates are all high-poverty census tracts on the city of Milwaukee’s north and northwest sides.

Also striking is that counties with the highest eviction rates are not necessarily the same as those with the highest percentages of rent-burdened households. As we explained in Focus #18-2018, a household is considered rent-burdened if it spends more than 30% of its income on rent. Only four counties had both eviction and rent burden rates above statewide averages in 2016: Racine, Kenosha, Milwaukee, and Rock. Data on rent-burdened households represent five-year averages (2012-16) and are the most recent figures available from the U.S. Census Bureau for all Wisconsin counties.

One reason some counties with high percentages of rent-burdened households may not have high eviction rates is that several have large student populations, including Dane, Eau Claire, and La Crosse. College students may be more likely to have family support that allows them to afford rent despite low income.

An eviction prevention task force formed earlier this year in Milwaukee County plans to pursue several strategies for reducing evictions that may have relevance for other Wisconsin communities, such as establishing a resource center similar to one in Madison where both tenants and landlords can seek guidance about housing problems; increasing tenant-landlord mediation services to keep housing disputes out of court; and expanding rent assistance programs for renters facing temporary financial emergencies. Addressing evictions is a challenging task that may require greater public and philanthropic resources, but it is also one that could pay dividends in helping to alleviate poverty, improve student outcomes, and reduce homelessness.