Tax Incremental Financing on the Rise

How Do Municipalities Use Their Primary Development Tool? 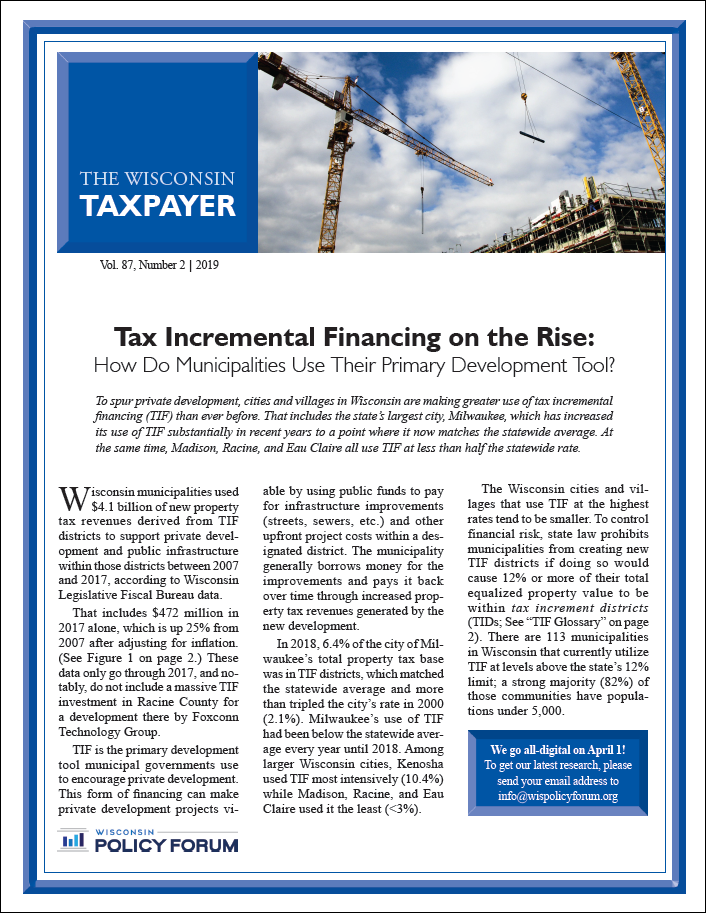 To spur private development, cities and villages in Wisconsin are making greater use of tax incremental financing (TIF) than ever before. That includes the state’s largest city, Milwaukee, which has increased its use of TIF substantially in recent years to a point where it now matches the statewide average. At the same time, Madison, Racine, and Eau Claire all use TIF at less than half the statewide rate.

Wisconsin municipalities used $4.1 billion of new property tax revenues derived from TIF districts to support private development and public infrastructure within those districts between 2007 and 2017, according to Wisconsin Legislative Fiscal Bureau data.

That includes $472 million in 2017 alone, which is up 25% from 2007 after adjusting for inflation. These data only go through 2017, and notably, do not include a massive TIF investment in Racine County for a development there by Foxconn Technology Group.

TIF is the primary development tool municipal governments use to encourage private development. This form of financing can make private development projects viable by using public funds to pay for infrastructure improvements (streets, sewers, etc.) and other upfront project costs within a designated district. The municipality generally borrows money for the improvements and pays it back over time through increased property tax revenues generated by the new development.

In 2018, 6.4% of the city of Milwaukee’s total property tax base was in TIF districts, which matched the statewide average and more than tripled the city’s rate in 2000 (2.1%). Milwaukee’s use of TIF had been below the statewide average every year until 2018. Among larger Wisconsin cities, Kenosha used TIF most intensively (10.4%) while Madison, Racine, and Eau Claire used it the least (<3%).

The Wisconsin cities and villages that use TIF at the highest rates tend to be smaller. To control financial risk, state law prohibits municipalities from creating new TIF districts if doing so would cause 12% or more of their total equalized property value to be within tax increment districts (TIDs). There are 113 municipalities in Wisconsin that currently utilize TIF at levels above the state’s 12% limit; a strong majority (82%) of those communities have populations under 5,000. Continue reading…