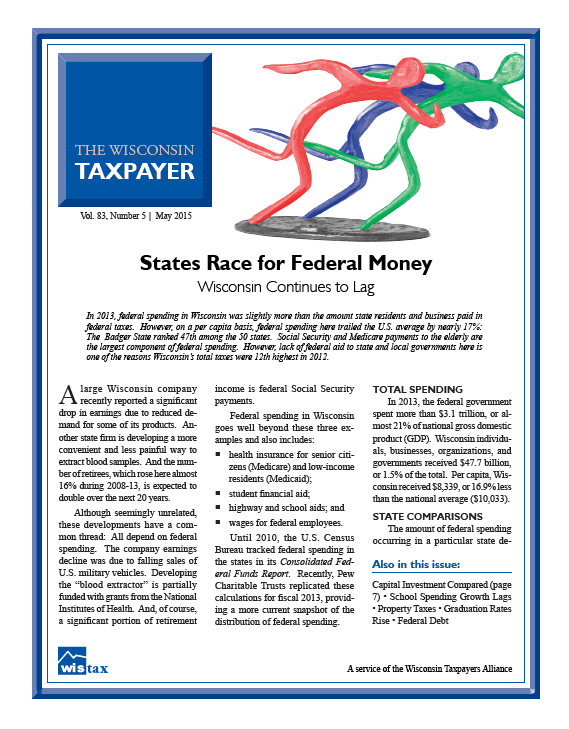 In 2013, federal spending in Wisconsin was slightly more than the amount state residents and business paid in federal taxes. However, on a per capita basis, federal spending here trailed the U.S. average by nearly 17%: The Badger State ranked 47th among the 50 states. Social Security and Medicare payments to the elderly are the largest component of federal spending. However, lack of federal aid to state and local governments here is one of the reasons Wisconsin’s total taxes were 12th highest in 2012.

A large Wisconsin company recently reported a significant drop in earnings due to reduced demand
for some of its products. Another state firm is developing a more convenient and less painful way to extract blood samples. And the number of retirees, which rose here almost 16% during 2008-13, is expected to double over the next 20 years.
Although seemingly unrelated, these developments have a common thread: All depend on federal spending. The company earnings decline was due to falling sales of U.S. military vehicles. Developing the “blood extractor” is partially funded with grants from the National Institutes of Health. And, of course, a significant portion of retirement income is federal Social Security payments.

Until 2010, the U.S. Census Bureau tracked federal spending in the states in its Consolidated Federal Funds Report. Recently, Pew Charitable Trusts replicated these calculations for fiscal 2013, providing a more current snapshot of the distribution of federal spending.