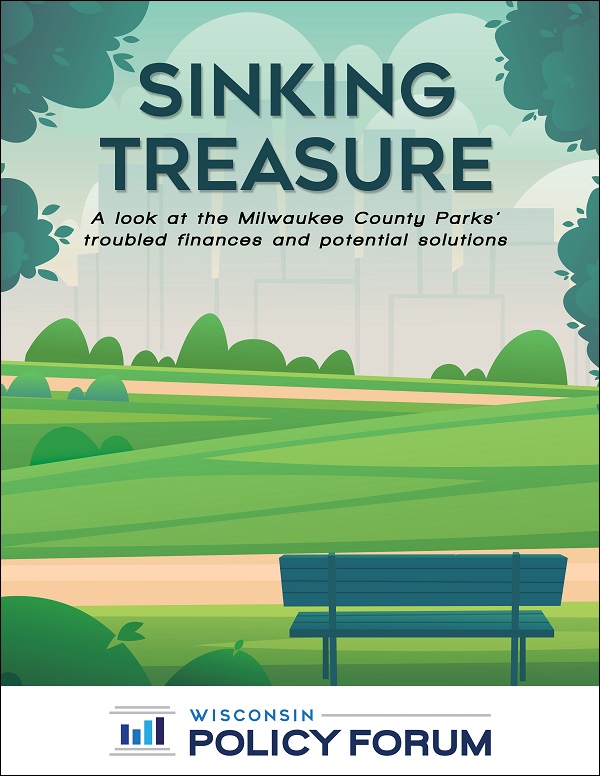 The financial challenges facing the Milwaukee County Parks have been well-documented by county officials and auditors and several blue ribbon commissions over the past two decades. The Wisconsin Policy Forum itself has spent considerable time researching the scope of those challenges and their causes.

For example, back in 2002, a Forum report highlighted the downward trajectory of county taxpayer support for the parks, finding that the county’s $30.6 million property tax levy allocation that year was less than half the $65.8 million it had provided in 1975 in inflation-adjusted dollars. The report also found that county park employment had declined from 1,195 full-time equivalent (FTE) positions in 1985 to 802 in 2002 (33%).

In a 2008 analysis, we warned of “an estimated $277 million backlog of infrastructure maintenance and repairs, declining attendance at pools and golf courses, and dependence on a property tax levy funding source that has diminished by two-thirds during the past 30 years.” Another Forum report released in 2013 noted that little had changed, citing a continued decline in staffing (now alarmingly down to 391 FTEs) and the parks department’s growing inability to “stay on top of repairs and upkeep (including basic functions like mowing, painting, and cleaning).”

Most recently, in the concluding segment of our five-part series of reports detailing the infrastructure challenges facing the metro Milwaukee region, we cited county parks as the region’s most pressing area of infrastructure neglect. The report found the county should be spending $39 million annually to repair and replace parks assets based on current needs, but the parks had received an average of only about $9.6 million annually in capital funds during the preceding five years.

These challenges would appear to constitute an urgent call for action. Yet, despite growing public awareness of the problem highlighted by voter approval of a 2008 advisory referendum supporting a dedicated sales tax for the parks, they continue to compete with other county functions for finite property tax revenues and limited borrowing capacity as their unmet operating and capital needs grow.

It now appears that action cannot be delayed any longer. In the spring of 2021, Milwaukee County Executive David Crowley warned that if current trends and projections regarding county salaries and fringe benefit costs continue, then there may be no property tax levy available to support the parks by 2027. Such a development likely would necessitate a dismantling of the Milwaukee County park system at a time when open space and recreational resources have been valued more than ever by county residents during the pandemic.

To address this urgent matter, the Milwaukee County Parks commissioned the Forum to conduct a research and facilitation project that would consider options for creating a sustainable financial path forward. In considering options for the future, the project has and will consider not only steps needed to promote fiscal viability, but also the imperative to update parks assets and offerings to meet the needs and expectations of citizens in the 2020s (and beyond) and to further Milwaukee County’s strategic emphasis on racial equity and inclusion.

This report is the first deliverable associated with that project. It begins by reviewing the history of Milwaukee County’s financial support for its parks and reassessing the parks department’s current financial condition and challenges. It then explores funding and governance models used by peer park systems and concludes by summarizing the potential to consider elements of those models for Milwaukee County.

The findings of this report will be considered by parks stakeholders and the public, with an eye toward identifying a handful of specific new partnerships and governance models that merit further analysis as options to help Milwaukee County create a financially sustainable parks system that will meet the needs and expectations of its residents. A subsequent report will flesh out those models so they may be considered by policymakers as part of a long-term vision and plan for the Milwaukee County Parks. Continue reading…