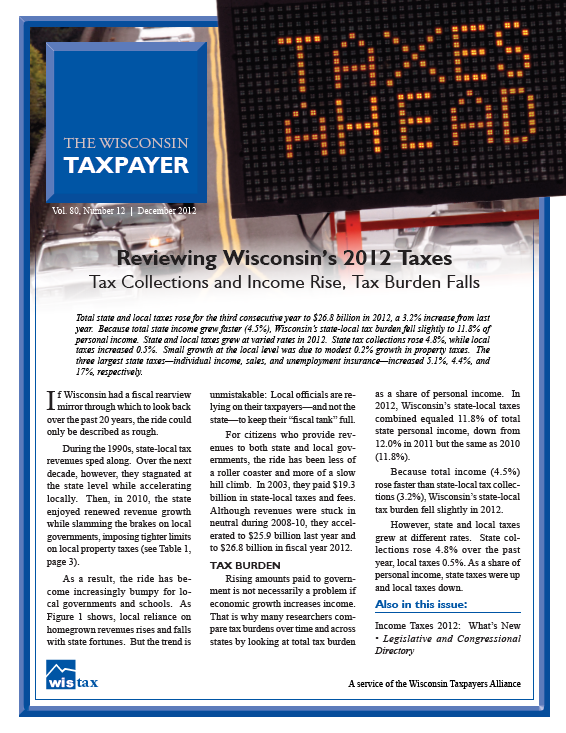 If Wisconsin had a fiscal rearview mirror through which to look back over the past 20 years, the ride could only be described as rough.
During the 1990s, state-local tax revenues sped along. Over the next decade, however, they stagnated at the state level while accelerating locally. Then, in 2010, the state enjoyed renewed revenue growth while slamming the brakes on local governments, imposing tighter limits on local property taxes (see Table 1, page 3).
As a result, the ride has become increasingly bumpy for local governments and schools. As Figure 1 shows, local reliance on homegrown revenues rises and falls with state fortunes. But the trend is unmistakable: Local officials are relying on their taxpayers—and not the state—to keep their “fiscal tank” full.
For citizens who provide revenues to both state and local governments, the ride has been less of a roller coaster and more of a slow hill climb. In 2003, they paid $19.3 billion in state-local taxes and fees. Although revenues were stuck in neutral during 2008-10, they accelerated to $25.9 billion last year and to $26.8 billion in fiscal year 2012.
TAX BURDEN
Rising amounts paid to government is not necessarily a problem if economic growth increases income. That is why many researchers compare tax burdens over time and across states by looking at total tax burden as a share of personal income. In 2012, Wisconsin’s state-local taxes combined equaled 11.8% of total state personal income, down from 12.0% in 2011 but the same as 2010 (11.8%).
Because total income (4.5%) rose faster than state-local tax collections (3.2%), Wisconsin’s state-local tax burden fell slightly in 2012.
However, state and local taxes grew at different rates. State collections rose 4.8% over the past year, local taxes 0.5%. As a share of personal income, state taxes were up and local taxes down.