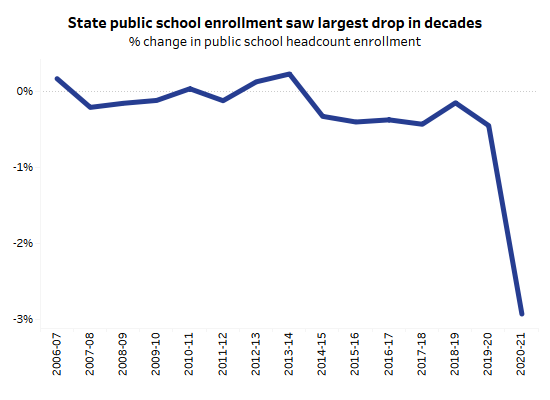 At the height of the COVID-19 pandemic, a historic drop in Wisconsin public school enrollment in the 2020-21 school year was accompanied by a smaller but still notable decline in private school enrollment, with both concentrated at the lowest grade levels. Meanwhile, homeschool and virtual charter school enrollment rose substantially. Whether these trends continue is a critical question for school officials and policymakers in the next school year and beyond.

Wisconsin Department of Public Instruction (DPI) data show private school enrollment declined 1.5% in the 2020-21 school year, which began during the COVID-19 pandemic that had previously triggered school closures and a shift to remote learning in March 2020.

This occurred alongside a larger and more widely publicized decline in public school enrollment of 2.9% in 2020-21 (see Figure 1). However, the figures offer at least a partial counterpoint to speculation about a potential surge in private school enrollment during the pandemic as many public schools continued remote instruction through the fall and winter.

This enrollment increase was the largest since at least 1984, the earliest year for which data are available, and likely the largest single-year increase ever. While homeschool students still account for a small share of all students in Wisconsin, that share increased from about 2.2% in the 2019-20 school year to about 3.25 % in 2020-21.

Wisconsin charter schools also saw enrollment rise nearly 14% in the 2020-21 school year, after years of remaining roughly flat. This trend appears to have been driven by an explosion of enrollment at virtual charters – not surprising given the widespread shift to remote instruction. Virtual charter enrollment shot up 84% in 2020-21, from 8,696 to 16,020.

These trends appear to have mirrored in large part what took place across the country, according to new data from the National Center for Education Statistics (NCES).

While 2020-21 was the seventh consecutive year in which public school enrollment in Wisconsin has declined, it was by far the largest decline in that span in both absolute and percentage terms. It was also by far the largest single-year decline in public school enrollment in at least the last 25 years (the DPI data used for this analysis goes back to 1995) and reached its lowest point during that period.

This suggests the enrollment decline may have been driven in part by families who opted to delay starting their youngest learners, especially pre-K students, in school during the pandemic.

Taking a geographic lens to the decline in public school enrollment shows it was not uniform across the state. The 10 largest school districts in Wisconsin, all of which serve large urban centers, account for 25% of total statewide enrollment, but their enrollment drop was 38% of the total decline in the state. Reasons for the difference could range from the greater use of virtual and hybrid learning by urban schools to higher levels of concern about COVID-19 in those areas.

Wisconsin law requires all virtual charters to be authorized by school districts and as such their enrollment – in addition to being documented separately – also is included as part of the public school enrollment data cited previously. This means that, after accounting for the strong growth in virtual charter enrollment, the decline in enrollment at traditional non-charter public schools was greater than 2.9%.

While national trends in homeschooling and virtual charter enrollment are somewhat less clear, there is evidence the former saw increases across the country as well. The U.S. Census Household Pulse Survey found in its first week during the early period of the pandemic (April 23-May 5 of 2020) that about 5.4% of U.S. households with school-aged children reported homeschooling. By fall 2020, (Sept. 30-Oct. 12), 11.1% of households with school-age children reported homeschooling.

Heading into the 2021-22 school year, the question facing many districts – especially those most acutely affected by enrollment declines in 2020-21 – will be to what extent, if at all, those students who left traditional public schools will return. Predicting this is difficult, in part given the lack of any recent historical precedent to an educational disruption of this magnitude.

This is illustrated in part by the strikingly different predictions made by Wisconsin’s two largest districts, as first discussed by the Forum in our May report: “Opportunity and Uncertainty: An Early Look at the 2022 Budgets of Wisconsin’s Two Largest School Districts.”

Madison Metropolitan School District (MMSD) made less optimistic assumptions – projecting 4K and kindergarten students will enroll at normal rates in 2021-22, but that 1st-12th graders who have left the district largely will not return. The district’s enrollment decline in 2020-21 was nearly 700 students, or about a 2.6% decrease. As part of its 2022 budget proposal, the district projects it will see only a small share of those lost students return in 2021-22.

It is impossible to predict with certainty what will happen next with regard to the severity of the pandemic and how it will impact enrollment during the 2021-22 school year. The optimism that came with vaccination efforts has been tempered by the spread of the more transmissible Delta variant, raising the specter of continued turbulence.

Whatever occurs, the financial implications for public school districts will be considerable. Much of the state’s school finance system – including state limits on school district revenues and various forms of state aid – are based on different enrollment counts including rolling averages that take into account the low 2020-21 counts. In the new state budget, lawmakers chose not to adjust any of those formulas to make allowances for the pandemic.

For now, federal relief aid may carry districts through at least some of these difficulties. Yet if enrollment declines persist in 2021 and beyond, it could impact district budgets and lead to difficult decisions later on.