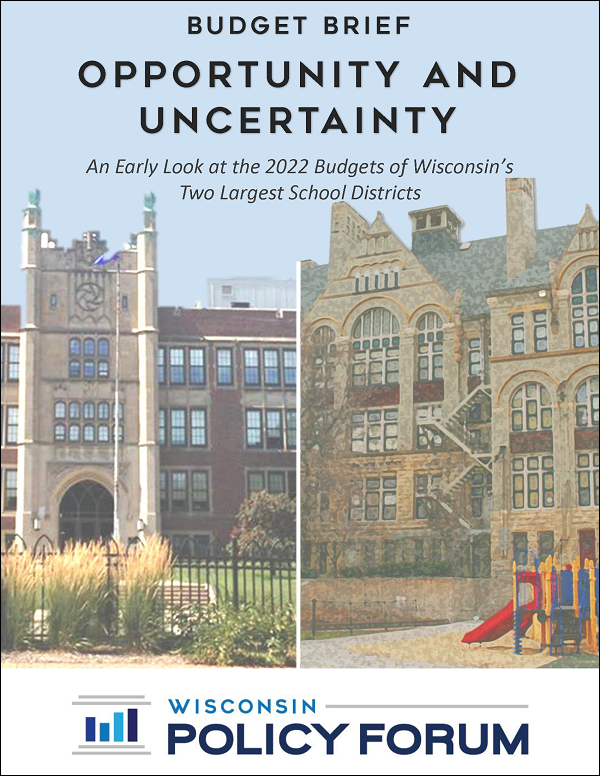 Since 2013, the Wisconsin Policy Forum has produced an annual report on the superintendent’s proposed Milwaukee Public Schools (MPS) budget that analyzes and describes the key elements and provides an independent assessment for school board members as they deliberate its contents. Last year, for the first time, we produced a similar budget brief for the Madison Metropolitan School District (MMSD).

This year, because of several unique circumstances, we alter our approach to consider the budgets of Wisconsin’s two largest school districts in a single report. One reason is the vast uncertainty that surrounds both proposed budgets. MPS and MMSD each will receive huge new infusions of federal dollars from recently adopted pandemic relief packages, but there is still some murkiness surrounding allowable uses of those dollars and they have not yet been plugged into the superintendents’ proposals.

Moreover, state lawmakers have not yet determined whether or how the infusion of federal aid will impact their decision-making on state K-12 aids and revenue limits in the next state budget, thus also casting a cloud of uncertainty over the districts’ state and local revenue picture for next year. Similarly, questions surrounding future district enrollment levels and whether they will rebound in the fall will impact future revenue limits and state aid allocations and provide additional ambiguity for both districts.

Another unusual element is the recent adoption of referenda by the voters of both districts that allow them to exceed state revenue limits. This provides them with access to substantial new local revenues at a time when the remainder of their revenue picture has not yet been decided.

Given that the 2022 budgets that will be adopted by MPS and MMSD leaders over the next few weeks will have several key “placeholders” that will need to be reconsidered in the fall, it made little sense for us to conduct our typical comprehensive analysis of the two budgets as they have been proposed. Instead, this combined budget brief focuses mainly on the overriding issues the two budgets have in common and how their resolution will impact future budget solvency and stability.

We have also constructed this report to include insights that hopefully will be germane to other large districts throughout Wisconsin. Those districts may not be receiving the levels of federal aid enjoyed by MMSD and MPS in particular and the same opportunities afforded by their referenda, but they may wish to contemplate the same issues and observations we present here as they consider their upcoming budgets. Continue reading…