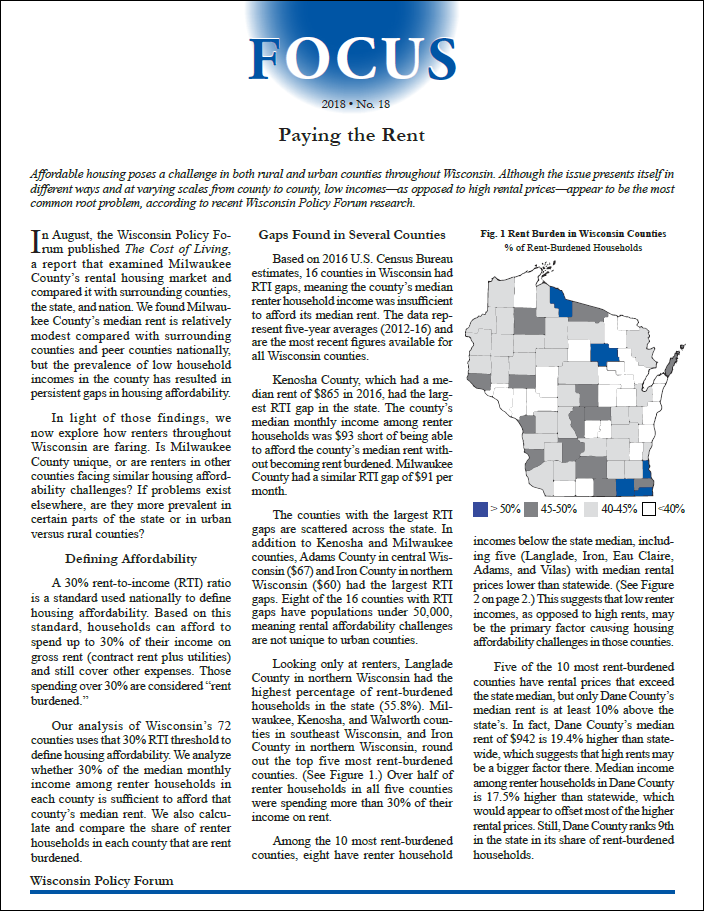 Affordable housing poses a challenge in both rural and urban counties throughout Wisconsin. Although the issue presents itself in different ways and at varying scales from county to county, low incomes—as opposed to high rental prices—appear to be the most common root problem.

In August, the Wisconsin Policy Forum published The Cost of Living, a report that examined Milwaukee County’s rental housing market and compared it with surrounding counties, the state, and nation. We found Milwaukee County’s median rent is relatively modest compared with surrounding counties and peer counties nationally, but the prevalence of low household incomes in the county has resulted in persistent gaps in housing affordability.

In light of those findings, we now explore how renters throughout Wisconsin are faring. Is Milwaukee County unique, or are renters in other counties facing similar housing affordability challenges? If problems exist elsewhere, are they more prevalent in certain parts of the state or in urban versus rural counties?

A 30% rent-to-income (RTI) ratio is a standard used nationally to define housing affordability. Based on this standard, households can afford to spend up to 30% of their income on gross rent (contract rent plus utilities) and still cover other expenses. Those spending over 30% are considered “rent burdened.”

Based on 2016 U.S. Census Bureau estimates, 16 counties in Wisconsin had RTI gaps, meaning the county’s median renter household income was insufficient to afford its median rent. The data represent five-year averages (2012-16) and are the most recent figures available for all Wisconsin counties.

Kenosha County, which had a median rent of $865 in 2016, had the largest RTI gap in the state. The county’s median monthly income among renter households was $93 short of being able to afford the county’s median rent without becoming rent burdened. Milwaukee County had a similar RTI gap of $91 per month.

The counties with the largest RTI gaps are scattered across the state. In addition to Kenosha and Milwaukee counties, Adams County in central Wisconsin ($67) and Iron County in northern Wisconsin ($60) had the largest RTI gaps. Eight of the 16 counties with RTI gaps have populations under 50,000, meaning rental affordability challenges are not unique to urban counties.

Looking only at renters, Langlade County in northern Wisconsin had the highest percentage of rent-burdened households in the state (55.8%). Milwaukee, Kenosha, and Walworth counties in southeast Wisconsin, and Iron County in northern Wisconsin, round out the top five most rent-burdened counties. (See Figure 1) Over half of renter households in all five counties were spending more than 30% of their income on rent.

Among the 10 most rent-burdened counties, eight have renter household incomes below the state median, including five (Langlade, Iron, Eau Claire, Adams, and Vilas) with median rental prices lower than statewide. (See Figure 2) This suggests that low renter incomes, as opposed to high rents, may be the primary factor causing housing affordability challenges in those counties.

Five of the 10 most rent-burdened counties have rental prices that exceed the state median, but only Dane County’s median rent is at least 10% above the state’s. In fact, Dane County’s median rent of $942 is 19.4% higher than statewide, which suggests that high rents may be a bigger factor there. Median income among renter households in Dane County is 17.5% higher than statewide, which would appear to offset most of the higher rental prices. Still, Dane County ranks 9th in the state in its share of rent-burdened households.

The specific characteristics of each county’s rental market influence the shape and scale of its housing affordability challenges. For example, while rural counties like Langlade, Iron, Adams, and Vilas have high percentages of rent-burdened households, the vast majority of households in those counties own their homes and their populations are small. On the other hand, just over half of all households in Milwaukee County are renters, and Milwaukee County is the most populous county in the state, so its high share of rent-burdened households indicates a much larger problem. Also, large student populations play a role in the housing markets of some counties, like Dane and Eau Claire, while other counties have no colleges or universities.

Overall, our analysis shows that housing affordability challenges exist throughout Wisconsin and are not limited to urban areas. The key factors driving those challenges vary by county and must be taken into account in developing solutions.