On the Right Track?

The Use of TIF for Milwaukee's Streetcar 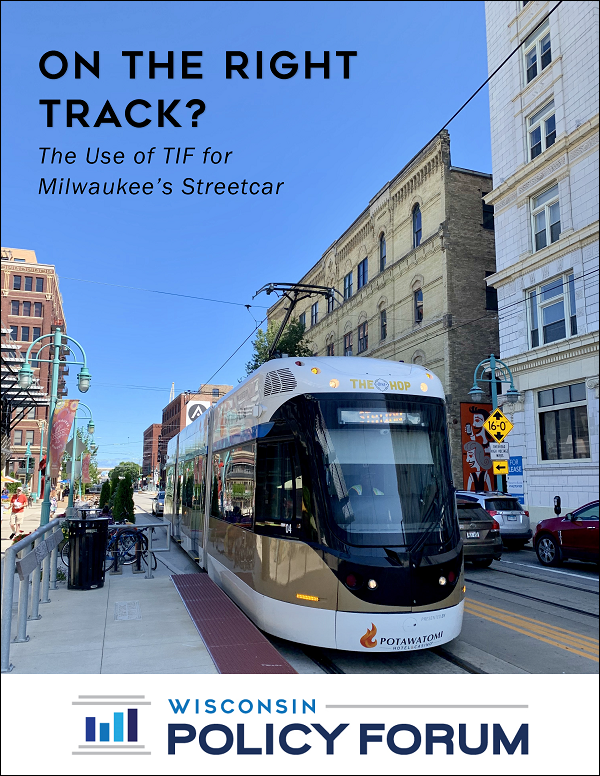 In February 2019, with Milwaukee in the midst of a downtown development boom, the Wisconsin Policy Forum published a report that found the city is making greater use of tax increment financing (TIF) to spur development than ever before. While the city has used TIF for several decades to foster private development by paying for associated public infrastructure and site preparation work, it has drawn on the tool for additional purposes in recent years. One project that exemplifies this shift is Milwaukee’s new streetcar system, The Hop. The city has dedicated $59 million in TIF funding to constructing the system’s first phase.

In this report, we analyze how the city of Milwaukee is financing the capital costs of The Hop and compare Milwaukee’s financial strategy to those taken by other cities with recently developed streetcar systems. This analysis is not intended to weigh in on the merits of constructing the system in the first place or extending it in the future. With the system already established, our aim instead is to inform the debate about using TIF for proposed extensions. This issue is critical given that current plans call for the city to use TIF as the primary local revenue source for those extensions.

Overall, our analysis reveals that Milwaukee’s method of financing its streetcar system is uncommon nationally. It also provides context for the city’s financial approach and raises questions that can be debated by streetcar supporters and opponents alike. Key takeaways include:

Milwaukee is similar to other cities in relying on a mix of federal and local funding sources to finance its streetcar system. Federal grants covered 54% of the first phase of The Hop, with the remainder coming from local funding generated through TIF districts. Federal grants have helped most cities develop their streetcar systems, covering an average of 36% of total project costs among the 10 cities we analyzed. Milwaukee’s mix of federal vs. local funding is in line with other cities nationally.

Milwaukee is the only city that has used TIF as its primary local revenue source for streetcar system development. While all cities needed local revenue to cover at least a portion of the startup construction costs of their streetcar systems, Milwaukee is an outlier in its heavy reliance on TIF as the local financing tool. Only two other cities used TIF at all, and both of those (Cincinnati and Portland) used it to cover much smaller shares of their total project costs (see chart) and combined TIF with other local and state funding sources.

Most of the financing mechanisms used by other cities to develop streetcar systems are not available to Milwaukee under current state law. Revenues generated by local sales taxes, state transportation programs, or special-purpose districts have been used to develop the streetcar systems in most of the cities we analyzed. The state of Wisconsin restricts municipalities from establishing sales taxes, however, and the state does not support transit capital projects. Putting aside the question of whether Milwaukee ought to expand its streetcar system, our analysis shows that if it is going to do so, TIF is one of its only local financing options.

Kansas City’s creation of a “transportation development district” is a notable exception in that it is the one example we found that could at least be partially replicated in Milwaukee. If sufficient support exists among business owners or all property owners, then the city could create a business or neighborhood improvement district (BID or NID) that could levy special assessments on nearby properties that benefit from proximity to the streetcar system. A BID or NID would not have the power to levy sales taxes or raise other types of revenue available to Kansas City, however, and other revenue sources may still be needed to fully pay for streetcar system extensions.

Strong points can be made for and against using TIF to finance streetcar system development. Yet, it may come down to whether or not one believes the system itself is a worthwhile public investment. Those who believe the streetcar system is good for downtown Milwaukee and the city in general can argue that using TIF to finance system extensions makes sense because the funding is generated from the areas of the city that most benefit from the streetcar rather than from property owners citywide.

Those opposed to the streetcar can argue that TIF is not the right tool for expanding the system because it can be difficult to determine the extent to which extensions generate increased property tax base. An argument also can be made that delaying the closure of successful existing TIF districts and diverting their increased property tax revenues to system expansion (instead of back to the general tax rolls) is essentially deciding that streetcar extensions are the highest and best use of those resources.

Future debates about streetcar expansions are likely to focus not on whether TIF is the correct financial approach, but instead on whether the streetcar itself is worthy of additional major public sector investment. The relatively rare use of TIF for streetcar construction in other cities offers compelling evidence that other funding sources may offer a more appropriate means of financing a downtown infrastructure investment that typically cannot be linked definitively to new development, and that arguably conveys broader public benefits like livability and mobility. Consequently, in the long term, additional financing options not only for the streetcar, but also for other transportation infrastructure and economic development investment activities may be desirable. The lack of such options for Milwaukee and other Wisconsin municipalities is worthy of further analysis and discussion, regardless of one’s views on the merits of Milwaukee’s streetcar system. Continue reading…