An independent, third party review of the City of Milwaukee’s fiscal condition 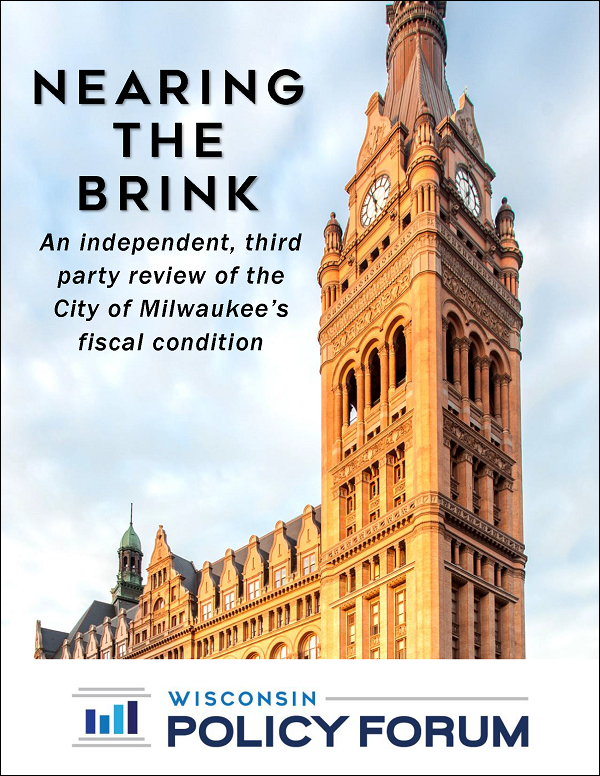 In 2009, a Wisconsin Policy Forum analysis of the city of Milwaukee’s fiscal condition (Between a Rock and a Hard Place) generated front page news by concluding that city government was “on the precipice of serious fiscal and programmatic disorder.” That conclusion was based on our assessment that “despite outstanding bond ratings, a comparatively well-funded pension system, and healthy reserves, Milwaukee has exhausted the capacity of its existing revenue streams to support its expenditure needs.”

Seven years later, after several difficult budgets, we revisited the city’s long-term outlook in Making Ends Meet. We found that city leaders had effectively used tools provided by 2011 Wisconsin Act 10 to dramatically lower health care costs, allowing it to meet pension obligations, replenish reserves, and avoid major service cuts. Still, we warned that the revenue structure allowed by the state “remain(ed) broken” and that “until it is modified to reduce the city’s reliance on property-related revenue…city finances will continue to be stressed.”

In this report, again commissioned by the Greater Milwaukee Committee, we revisit Milwaukee’s fiscal condition. The task has taken on new urgency following the economic impacts of a global pandemic, six more years of struggle with the same “broken” revenue structure, and worsening liabilities from pensions and long-term debt.

As in our previous two assessments, we lean on metrics developed by the International City/County Management Association (ICMA) to analyze both the city’s short-term and long-term fiscal health. In this update, however, we organize our analysis around the city’s four main financial challenges, and we boil down the 12 metrics used in our earlier reports to specific groupings linked to those challenges.

Over the years, we have discussed the four – Milwaukee’s unsustainable revenue mix, shrinking resources for core functions, diminishing reserves, and escalating long-term liabilities – with increasing alarm. Unfortunately, this new and closer look does little to ease our concern.

Still, the news is not all bad for the city. The infusion of $394 million in federal pandemic relief aid from the American Rescue Plan Act has allowed city leaders to push back the damage from their newest and perhaps most serious fiscal threat – a huge increase in employer pension payments – for two years. The aid also has allowed the city to avoid service cuts for now and build up its pension fund reserve to help forestall the pain from its budget and pension challenges once the federal funds are exhausted. Nevertheless, those funds provide only a short-term patch, not a permanent response, and there is risk that using them in this manner also will dampen the sense of urgency needed to develop long-term solutions, both in Milwaukee and Madison.

In the report, we seek to provide policymakers and citizens with a clear-eyed view of a city government that has struggled to stave off severe service cuts in the face of a longstanding and growing structural imbalance. A key change since we first highlighted this imbalance 13 years ago is that all of the symptoms that are prone to emerge when a government is under prolonged fiscal duress – withering reserves, growing liabilities, deferred capital investment, inability to sustain core service levels – are now plainly evident in Milwaukee’s city government. We hope that a greater understanding of the city’s financial predicament will better equip and motivate policymakers, civic leaders, and citizens to chart a course of action to address it.