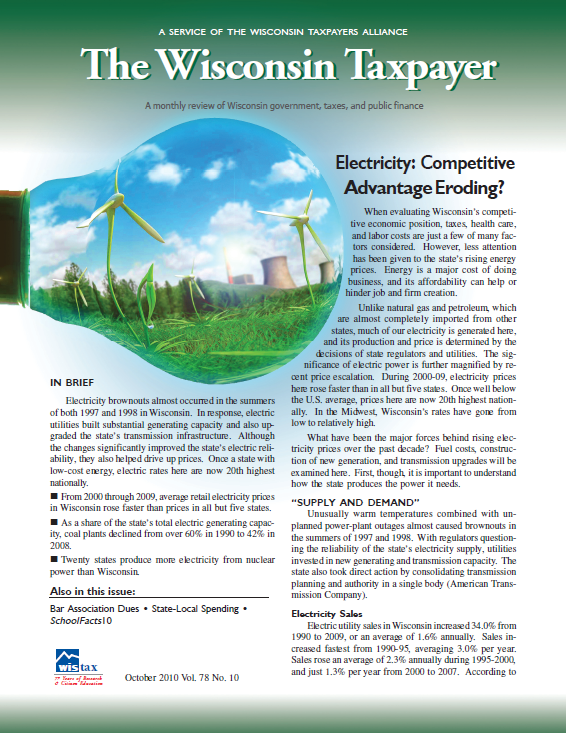 Electricity brownouts almost occurred in the summers of both 1997 and 1998 in Wisconsin. In response, electric utilities built substantial generating capacity and also upgraded the state’s transmission infrastructure. Although the changes significantly improved the state’s electric reliability, they also helped drive up prices. Once a state with low-cost energy, electric rates here are now 20th highest nationally.

When evaluating Wisconsin’s competitive economic position, taxes, health care, and labor costs are just a few of many factors considered. However, less attention has been given to the state’s rising energy prices. Energy is a major cost of doing business, and its affordability can help or hinder job and firm creation.
Unlike natural gas and petroleum, which are almost completely imported from other states, much of our electricity is generated here, and its production and price is determined by the decisions of state regulators and utilities. The significance of electric power is further magnified by recent price escalation. During 2000-09, electricity prices here rose faster than in all but five states. Once well below the U.S. average, prices here are now 20th highest nationally. In the Midwest, Wisconsin’s rates have gone from low to relatively high.
What have been the major forces behind rising electricity prices over the past decade? Fuel costs, construction of new generation, and transmission upgrades will be examined here. First, though, it is important to understand how the state produces the power it needs.