UWM’s challenges in a turbulent time 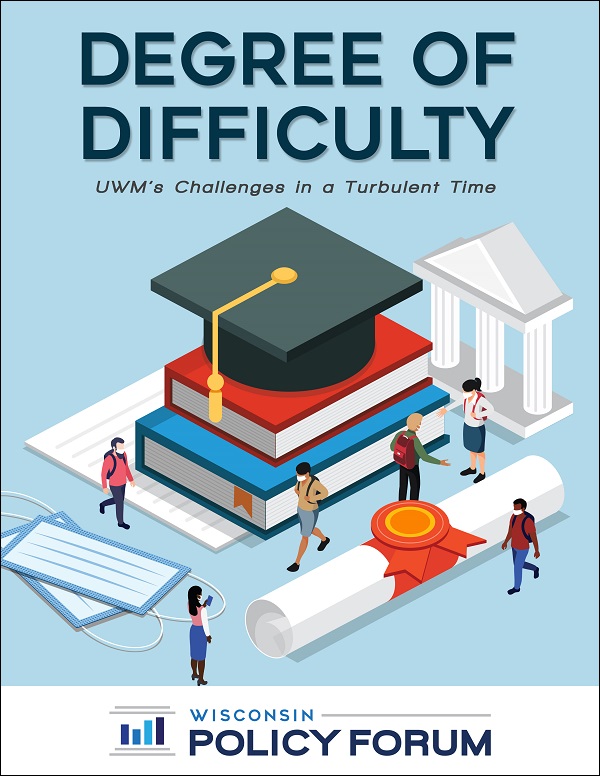 In a state where most higher education institutions are struggling to address financial and enrollment challenges, the University of Wisconsin-Milwaukee faces some of the greatest difficulties of all. UWM’s especially steep enrollment drop has exacerbated the effects of an eight-year tuition freeze and lagging state funding, forcing cuts to faculty, eroding reserves and research spending, and threatening efforts to raise retention and graduation rates. COVID-19 has only added to those difficulties, racking up costs and lost revenues that not even three generous rounds of federal aid have been able to cover.

As the largest university in the state’s biggest city, UWM plays a crucial role in providing higher education to disadvantaged students. It also serves as the third-largest research institution in the state, behind only UW-Madison and the Medical College of Wisconsin. In 2013, an estimated $1.5 billion in overall economic impact and nearly 14,500 jobs were generated by UWM and its employees, students, visitors, and affiliated organizations, according to NorthStar Analytics. In addition, the university added to the regional economy in other ways by boosting local workers’ skills and income and supporting local economic clusters in areas such as health care and freshwater science research.

Given the local economy’s need for innovation and for skilled workers such as nurses and programmers, UWM’s contributions are perhaps more important than ever. Yet its critical role is jeopardized by the university’s financial straits and its future contributions will depend heavily on decisions made at the state level as well as in response to the pandemic.

In December, the Wisconsin Policy Forum published “Falling Behind?,” a comprehensive review of the state’s public colleges and universities that gave particular attention to UW-Madison. This follow-up report builds on that previous work by examining the particular challenges facing the state’s other major public research university. Commissioned and partially funded by the UWM Foundation, this report reviews the recent history of UWM and its finances, its outcomes compared to peer universities in other states, and challenges that include the tuition freeze and enrollment declines. The key research questions we seek to answer include:

We find that UWM stands out among other public urban universities. With respect to enrollment as well as state funding and tuition revenues, almost none of UWM’s peers face such stiff challenges and together they may threaten its very status as a top-tier R1 research institution.

This report does not endorse only one set of solutions to these obstacles – the path ahead will require a willingness to experiment with a variety of approaches. Still, we hope our findings will help leaders at the state Capitol and within UWM and the UW System as they attempt to address the difficulties facing one of the state’s most essential institutions.