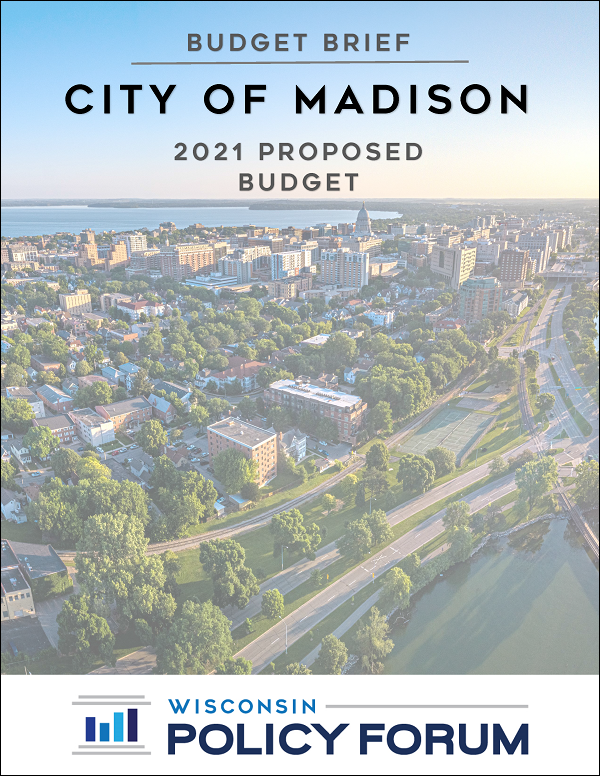 In a time of turmoil, the proposed 2021 budget maintains most of the city of Madison’s core services. Many observers will greet that as a welcome accomplishment given the crisis now unfolding but others may have some misgivings, either because they were hoping for more rapid changes in some agencies or because they see many of the city’s fiscal difficulties will extend into 2022.

As we noted in our first Madison budget brief last year, Wisconsin’s capital city relies heavily on a single source of revenue – local property taxes – that is limited by state law. Because of these restrictions, the proposed budget would increase 2021 property taxes on this December’s bills by one of the smallest percentages in years even as other forms of revenues — such as charges for city services, interest income, and fines — will remain depressed amid the pandemic. Add in labor contract commitments for healthy raises for police and firefighters and lagging state aid and the result is a $16.5 million potential budget gap for the coming year.

To avoid the shortfall, Mayor Satya Rhodes-Conway is asking the Madison city council to make some permanent spending cuts and accept some one-time measures such as furloughs and a substantial use of the city fund balance. Together, the current proposal and the city’s likely future revenues leave a high probability that a new shortfall for 2022 will appear next fall. In other closely watched areas, the city would increase rather than cut police spending and push off some capital projects such as the rollout of bus rapid transit.

This overall approach may strike many as reasonable – the present challenges are truly without match in living memory and the city must not only address revenue shortfalls, but also consider investments in areas like public health positions that might save lives. Yet policymakers also need to understand that, at best, the proposed budget would address only some of the city’s current challenges. State property tax limits are based on new construction in the city, which has been growing more slowly and leaving less room for elected officials to raise taxes.

Last year, we wrote that the city “must manage its short-term finances and long-term concerns while preparing for an eventual recession.” The downturn came more suddenly than any could have imagined and now the city must slowly recover and rebuild – a path that will likely require considering new approaches to its costs and revenues at both the city and state levels.

In extending our Madison budget brief into a second year, the Forum seeks to encourage this informed discussion in the weeks ahead and well beyond. In a modest way, we hope in so doing to elevate not just the debate but the lives of city residents. Continue reading…