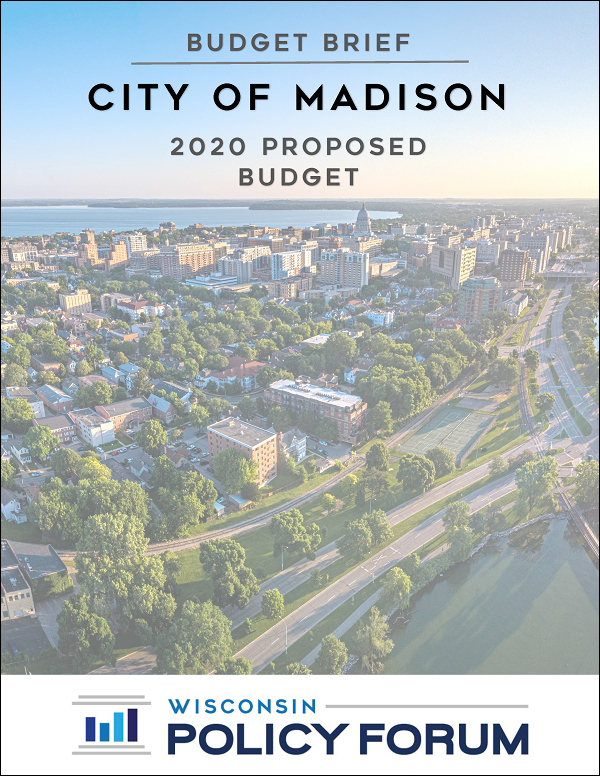 One overarching question looms over the Madison budget: how to handle the city’s growth? With the economy relatively strong and newly elected leaders in both the mayor’s office and nearly half the city council seats, Madison has a rare opportunity to answer that question.

With a stable core of state government jobs and an expanding private sector, the Madison area increasingly serves as an economic engine for Wisconsin. Between 2000 and 2018, employment in Dane County grew more than seven times as fast as it did in the rest of the state, accounting for 45% of the net new jobs created in the state during that period. The population in Dane rose more than three times as fast as all other Wisconsin counties and property values substantially faster.

Though growth within Madison itself was not as great as in the rest of the county, the city easily outpaced the rest of Wisconsin. The area also enjoys the lowest unemployment rate in the state and among the very lowest in the nation.

The trend in Madison and the surrounding areas contrasts sharply with the Milwaukee area, which has lost a small fraction of its population within the city itself and nearly 8% of the jobs in Milwaukee County since 2000. In its yearly analysis of city and county budgets in Milwaukee, the Wisconsin Policy Forum has documented how stagnant revenues and unfunded commitments to retirees mean local leaders must seek to avoid – or at least manage – painful cuts in personnel and programs.

In Madison, leaders instead are managing the challenges that come with growth. How they do so is increasingly important to all of Wisconsin.

The mayor’s proposed budget raises several more questions related to the larger concern of managing growth: should the city expand public transit or add police positions? Should Madison approve a wheel tax to help maintain and add to services or try to rely in large part on the property tax increase allowed under state caps? What can city leaders do about the cost of housing, recent flooding, or the fact that economic gains in Madison are not shared equally by its minority residents? Sections of this brief look at each of those issues.

The increase in the city’s overall revenues is strong compared to most Wisconsin communities. But Madison still deals with stagnant state aid and relies much more heavily than most cities on a relatively high property tax that is limited both by the state and by practical concerns.

Looking at the long term, Madison has relatively few unfunded commitments to retirees – a major advantage. Its debt levels, however, have risen substantially in recent years and a number of capital projects loom. Going forward, the city must manage its short-term finances and long-term concerns while preparing for an eventual recession.

In bringing our work on Milwaukee and state government budgets to Madison, the Forum seeks to shine light on the city’s finances and inform debate on the city budget in the weeks ahead. As in all our work, we highlight these facts and figures not for their own sake but in the hope of elevating the debate in the city and ultimately improving the lives of its residents.