The former Public Policy Forum maintained a year-end tradition of reflecting on our previous 12 months of policy research and selecting our top five research findings for the year. The new Wisconsin Policy Forum continues that tradition this year, but the selection process was much more difficult.

Our expanded research capacity allowed us to publish more than 50 reports and policy briefs in 2018. With all of that research to consider, choosing only five was truly challenging. To help narrow the field, we chose our finalists according to their relevance to important policy challenges and potential impact on policymaking.

Here, in chronological order, are the Forum’s top five research findings of 2018:

In 2005, state lawmakers adopted property tax levy limits for municipalities and counties that linked allowable annual levy growth to growth in net new construction. Our March report, Changing Patterns of New Construction, found that in the five years prior to adoption of this policy, new construction in cities and villages increased by 2.5% to 2.8% annually. In the past decade, however, most have failed to see annual growth exceeding 1.5%. (See Figure 1.) While the policy has successfully curbed their levy growth, it also has created significant revenue challenges for many municipal governments, and it may also have helped to lock in disparities between high- and low-growth communities. 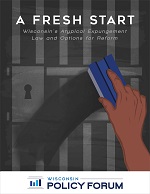 2. Wisconsin is unique among the 50 states in its policies toward sealing criminal records.

An estimated 1.4 million individuals in the state have criminal records, which may pose a major impediment to securing a job. In June we released A Fresh Start, a report comparing Wisconsin’s laws surrounding the expungement of criminal records to other states and exploring potential changes. Our review found no other state where judges must make expungement decisions at sentencing rather than after sentence completion, and where closed cases are not eligible for expungement. In addition, Wisconsin is among a handful of states that limit expungement eligibility only to young offenders (under age 25) and do not expunge cases that end in acquittals or dismissed charges. A bipartisan pair of lawmakers plans to introduce legislation early in the next session to modify some of these unique elements. 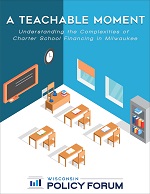 Our August report, A Teachable Moment, examined the complicated charter school funding process in Milwaukee. We found that when comparing the main state aids and property tax levy that Milwaukee Public Schools (MPS) receives for each of its non-instrumentality charter (NIC) school students to the amount it is paying out to the NIC schools, MPS saw an average positive gain of $2,243 per student. We pointed out that MPS uses the “positive balance” to support district-wide costs, which means that NIC schools contribute to the district’s general overhead and administrative costs like all MPS schools. The NIC schools, on the other hand, have argued that they should not pay as much toward MPS’ centralized services given that they do not receive the same benefit from those services as traditional schools.

4. For the first time in state history, total property values in Madison and in Dane County have topped those in the city and county of Milwaukee.

In August we also released A Tale of Two Cities (and Counties), an analysis of state data that showed total property valued at $28.7 billion in the city of Madison and $65 billion in Dane County, surpassing the $28.3 billion in the city of Milwaukee and $64.1 billion in Milwaukee County. By comparison, in 1988, property values in both the city and county of Milwaukee stood at $12 billion and $23 billion, or more than twice the values in Madison ($5.3 billion) and Dane County ($10.4 billion). (See Figure 2 on the following page for trends in the two cities.) Causes for the shift include differing rates of growth in population, jobs, and economic output in both regions; and the disparity in how the Great Recession and the subsequent recovery impacted both communities. 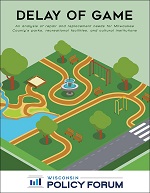 In September, Delay of Game, the fourth in our series of reports on local government infrastructure, found pressing repair and maintenance needs for almost every form of Milwaukee County’s parks infrastructure. The list of parks assets the county should replace within the next 10 years includes 85% of parking lots and service yards, 75% of walkways, 73% of parkways, and 47% of large buildings (not including the Mitchell Park Domes, which have their own extensive repair and replacement needs). To meet existing parks capital requests, the county would need to increase spending nearly tenfold (from $2.4 million to $23 million) in 2019 alone. Meanwhile, fulfilling all requests over the next four years would consume 97% of the county’s total capital financing capacity by 2022.

Including only five top findings meant leaving out several important ones. Those include findings related to the state-local tax burden hitting a near 50-year low, the state’s  psychiatrist shortage, dwindling hunting fee collections, affordable rental housing challenges, growing corrections population, and upcoming state budget; as well as findings related to evictions in Milwaukee, budget challenges in Racine, and Milwaukee County’s options for financing a new criminal courthouse. We also highlighted important information on the increased use of school and municipal referenda and wheel taxes across Wisconsin and huge retiree health care liabilities held by the state’s largest cities. Those interested in reviewing these and other research findings can access the Forum’s full portfolio of research publications on the research page of our website.

We’re proud of our research output and grateful for your support in our first year as a newly merged organization. We have some great projects in the works for 2019, from more groundbreaking research to expanded digital offerings. We’ll highlight some of our plans in our next edition of Focus. Happy holidays and see you next year!