What Do They Mean For Municipal Budgets? 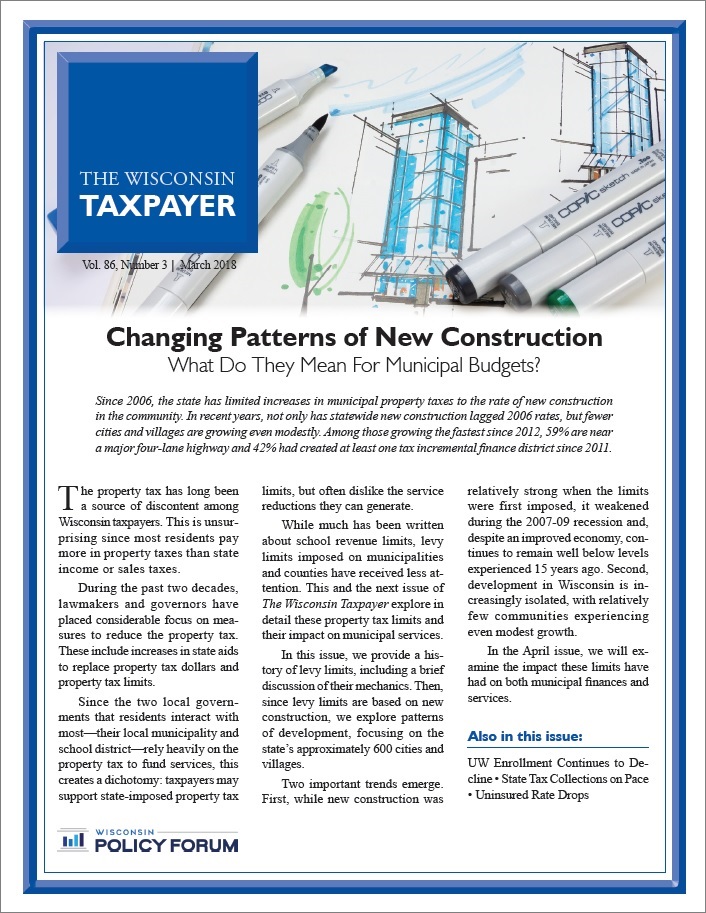 Since 2006, the state has limited increases in municipal property taxes to the rate of new construction in the community. In recent years, not only has statewide new construction lagged 2006 rates, but fewer cities and villages are growing even modestly. Among those growing the fastest since 2012, 59% are near a major four-lane highway and 42% had created at least one tax incremental finance district since 2011.

The property tax has long been a source of discontent among Wisconsin taxpayers. This is unsur­prising since most residents pay more in property taxes than state income or sales taxes.

During the past two decades, lawmakers and governors have placed considerable focus on mea­sures to reduce the property tax. These include increases in state aids to replace property tax dollars and property tax limits.

Since the two local govern­ments that residents interact with most—their local municipality and school district—rely heavily on the property tax to fund services, this creates a dichotomy: taxpayers may support state-imposed property tax limits, but often dislike the service reductions they can generate.

While much has been written about school revenue limits, levy limits imposed on municipalities and counties have received less at­tention. This and the next issue of The Wisconsin Taxpayer explore in detail these property tax limits and their impact on municipal services.

In this issue, we provide a his­tory of levy limits, including a brief discussion of their mechanics. Then, since levy limits are based on new construction, we explore patterns of development, focusing on the state’s approximately 600 cities and villages.

Two important trends emerge. First, while new construction was relatively strong when the limits were first imposed, it weakened during the 2007-09 recession and, despite an improved economy, con­tinues to remain well below levels experienced 15 years ago. Second, development in Wisconsin is in­creasingly isolated, with relatively few communities experiencing even modest growth.
Continue reading…