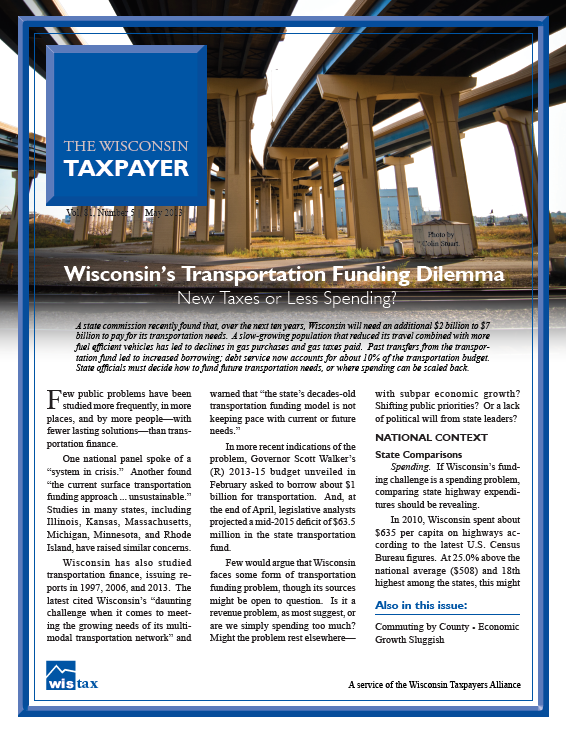 A state commission recently found that, over the next ten years, Wisconsin will need an additional $2 billion to $7 billion to pay for its transportation needs. A slow-growing population that reduced its travel combined with more fuel efficient vehicles has led to declines in gas purchases and gas taxes paid. Past transfers from the transportation fund led to increased borrowing; debt service now accounts for about 10% of the transportation budget. State officials must decide how to fund future transportation needs, or where spending can be scaled back.

Few public problems have been studied more frequently, in more places, and by more people—with fewer lasting solutions—than transportation finance.
One national panel spoke of a “system in crisis.” Another found “the current surface transportation funding approach … unsustainable.” Studies in many states, including Illinois, Kansas, Massachusetts, Michigan, Minnesota, and Rhode Island, have raised similar concerns.
Wisconsin has also studied transportation finance, issuing reports in 1997, 2006, and 2013. The latest cited Wisconsin’s “daunting challenge when it comes to meeting the growing needs of its multimodal transportation network” and warned that “the state’s decades-old transportation funding model is not keeping pace with current or future needs.”
In more recent indications of the problem, Governor Scott Walker’s (R) 2013-15 budget unveiled in February asked to borrow about $1 billion for transportation. And, at the end of April, legislative analysts projected a mid-2015 deficit of $63.5 million in the state transportation fund.
Few would argue that Wisconsin faces some form of transportation funding problem, though its sources might be open to question. Is it a revenue problem, as most suggest, or are we simply spending too much? Might the problem rest elsewhere—with subpar economic growth? Shifting public priorities? Or a lack of political will from state leaders?