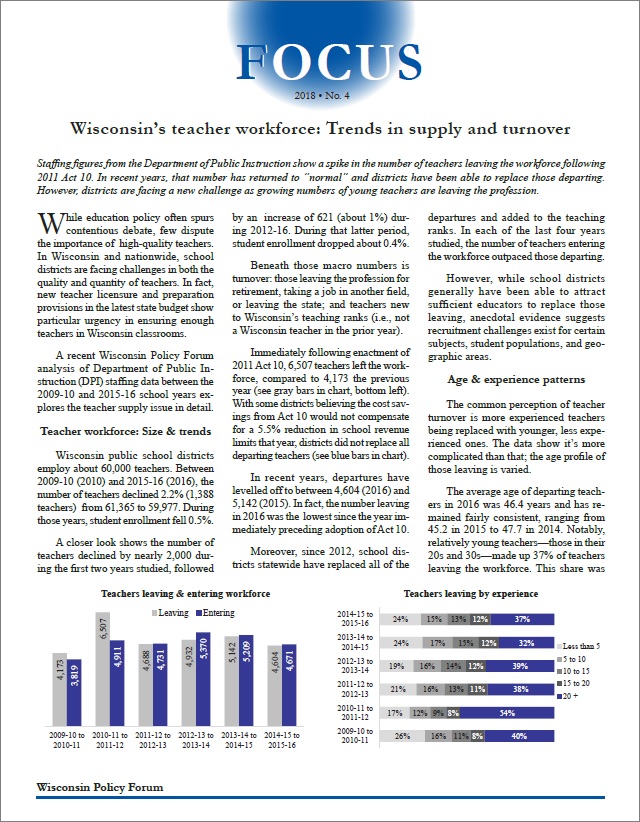 Staffing figures from the Department of Public Instruction show a spike in the number of teachers leaving the workforce following 2011 Act 10. In recent years, that number has returned to “normal” and districts have been able to replace those departing. However, districts are facing a new challenge as growing numbers of young teachers are leaving the profession.

While education policy often spurs contentious debate, few dispute the importance of high-quality teachers. In Wisconsin and nationwide, school districts are facing challenges in both the quality and quantity of teachers. In fact, new teacher licensure and preparation provisions in the latest state budget show particular urgency in ensuring enough teachers in Wisconsin classrooms.

A recent Wisconsin Policy Forum analysis of Department of Public Instruction (DPI) staffing data between the 2009-10 and 2015-16 school years explores the teacher supply issue in detail.

A closer look shows the number of teachers declined by nearly 2,000 during the first two years studied, followed by an  increase of 621 (about 1%) during 2012-16. During that latter period, student enrollment dropped about 0.4%.

Beneath those macro numbers is turnover: those leaving the profession for retirement, taking a job in another field, or leaving the state; and teachers new to Wisconsin’s teaching ranks (i.e., not a Wisconsin teacher in the prior year). 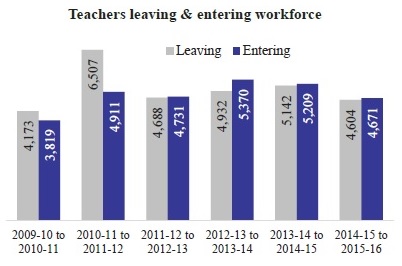 Immediately following enactment of 2011 Act 10, 6,507 teachers left the workforce, compared to 4,173 the previous year (see gray bars in chart). With some districts believing the cost savings from Act 10 would not compensate for a 5.5% reduction in school revenue limits that year, districts did not replace all departing teachers (see blue bars in chart).

Moreover, since 2012, school districts statewide have replaced all of the departures and added to the teaching ranks. In each of the last four years studied, the number of teachers entering the workforce outpaced those departing.

However, while school districts generally have been able to attract sufficient educators to replace those leaving, anecdotal evidence suggests recruitment challenges exist for certain subjects, student populations, and geographic areas.

The common perception of teacher turnover is more experienced teachers being replaced with younger, less experienced ones. The data show it’s more complicated than that; the age profile of those leaving is varied. 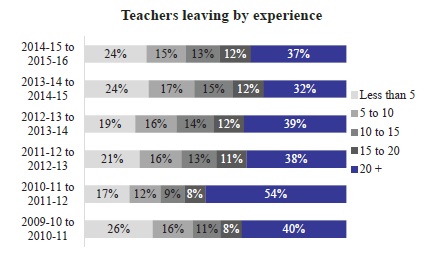 Without survey data, it is difficult to isolate the reasons behind recent departures of younger, less-experienced teachers. With a strengthening economy and low unemployment rates, attrition of early-career teachers may be driven by a rise in the availability of higher-paying jobs.

High pre-retirement attrition of Wisconsin teachers imposes additional training and development costs on schools and districts. It may also threaten their ability to maintain a stable teaching corps and adequately staff classrooms.

Moreover, national research confirms our findings that attrition among minority teachers, who tend to be concentrated in high-poverty and high-minority schools, are higher than overall attrition rates. The result is a higher proportion of inexperienced teachers in schools serving high concentrations of low-income and minority students, which may impede the closing of achievement gaps.