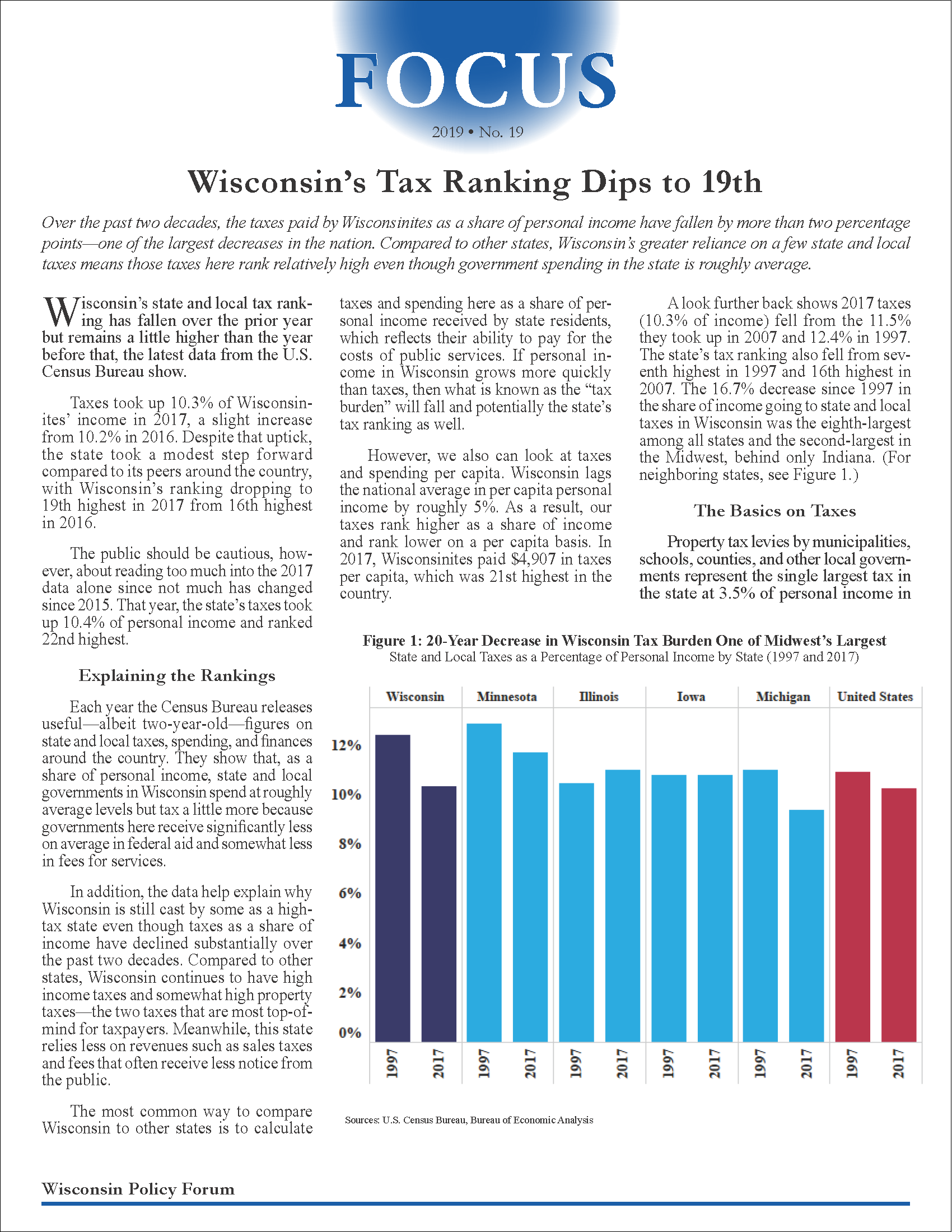 Over the past two decades, the taxes paid by Wisconsinites as a share of personal income have fallen by more than two percentage points—one of the largest decreases in the nation. Compared to other states, Wisconsin’s greater reliance on a few state and local taxes means those taxes here rank relatively high even though government spending in the state is roughly average.

Wisconsin’s state and local tax ranking has fallen over the prior year but remains a little higher than the year before that, the latest data from the U.S. Census Bureau show.

The public should be cautious, however, about reading too much into the 2017 data alone since not much has changed since 2015. That year, the state’s taxes took up 10.4% of personal income and ranked 22nd highest.

Each year the Census Bureau releases useful—albeit two-year-old—figures on state and local taxes, spending, and finances around the country. They show that, as a share of personal income, state and local governments in Wisconsin spend at roughly average levels but tax a little more because governments here receive significantly less on average in federal aid and somewhat less in fees for services.

In addition, the data help explain why Wisconsin is still cast by some as a high-tax state even though taxes as a share of income have declined substantially over the past two decades. Compared to other states, Wisconsin continues to have high income taxes and somewhat high property taxes—the two taxes that are most top-of-mind for taxpayers. Meanwhile, this state relies less on revenues such as sales taxes and fees that often receive less notice from the public.

The most common way to compare Wisconsin to other states is to calculate taxes and spending here as a share of personal income received by state residents, which reflects their ability to pay for the costs of public services. If personal income in Wisconsin grows more quickly than taxes, then what is known as the “tax burden” will fall and potentially the state’s tax ranking as well.

However, we also can look at taxes and spending per capita. Wisconsin lags the national average in per capita personal income by roughly 5%. As a result, our taxes rank higher as a share of income and rank lower on a per capita basis. In 2017, Wisconsinites paid $4,907 in taxes per capita, which was 21st highest in the country.

The Basics on Taxes

Property tax levies by municipalities, schools, counties, and other local governments represent the single largest tax in the state at 3.5% of personal income in 2017. Though that figure was unchanged from the previous year, the state’s property tax ranking in 2017 fell by one slot to 16th highest.

As the Forum has pointed out before, the state’s overall property tax ranking would change significantly if we looked at some subsets of property taxpayers. For example, Wisconsin homeowners pay higher property taxes compared to most other states. The reasons include the “uniformity clause” in the state constitution, which requires residential and other types of property to be taxed at the same rate and effectively blocks the kind of preferential tax treatment given to homeowners in some other states.

Wisconsin’s individual income tax takes up the next highest share of income at 2.8%, which was 11th highest in the country in 2017. The tax’s share of personal income and its national rank were both unchanged from 2016. Again, the ranking would change if we looked at some subsets of income taxpayers.

The sales tax—the last of the state’s three big taxes—took up 2% of personal income in Wisconsin, ranking the state 33rd nationally. Those figures have been essentially unchanged since 2009.

Other individual taxes in Wisconsin were much smaller and vary in rank compared to those of other states. In 2017, Wisconsin taxes were above average on corporations, gasoline and motor fuel, and cigarettes and tobacco products. Taxes on alcoholic drinks were below average while vehicle registration fees, also known as wheel taxes, were roughly on par with those nationally.

Where We Stand on Spending

Wisconsin ranked 24th highest in the nation in 2017 on a key spending metric known as direct general expenditures, which took up 19.6% of personal income in the state. That raises the question of why the state’s spending rank would be lower than its tax ranking.

One reason is federal aid makes up a relatively small share of the overall revenue for state and local governments in Wisconsin, with the state ranking among the bottom 10 for federal assistance in 2017 at 41st. In addition, fees for services such as tuition and sewers accounted for 3.1% of personal income that year, which ranked 29th highest and was below the national average.

Spending on K-12 schools in Wisconsin accounted for 4.1% of personal income in 2017, which ranked 24th highest and equaled the national average. That was significantly less than the 5.3% of income spent on K-12 education in 1997, which ranked sixth. Complicating comparisons, however, is the fact that 2011 Act 10 ended most collective bargaining for teachers and most other public employees and lowered school and local government spending on workers’ benefits. In 2017, higher education spending on universities, colleges, and technical colleges ranked 19th highest at 2.3% of income, which was above average among states.

Spending on Medicaid and other public assistance programs in the state took up 4.6% of income, ranking 22nd highest. Corrections spending ranked 15th highest in the nation while police spending was 21st highest and fire spending 33rd.

Spending on highways and streets represented 2% of income in 2017, or sixth highest among states. That was a large increase from the 1.3% of income spent in 2016, which ranked 20th.

As laid out above, Wisconsin relies heavily on income and property taxes and much less so on sales taxes, fees, and federal aid. Taken as a whole, revenues in this state remain less evenly balanced than those of the average state.

Some actions by state officials in recent years have served to nudge the state toward a more balanced set of revenues. Those policies include state limits on property tax levies by municipalities, counties, and technical colleges; state revenue limits that effectively restrict school property taxes; and a series of income tax cuts that include those recently approved by lawmakers and Gov. Tony Evers as well as former Gov. Scott Walker.

Other state policies could be seen as having the opposite effect. For example, the state’s freeze on in-state tuition for University of Wisconsin schools effectively limits state revenue from fees and may be putting more pressure on lawmakers to provide income and sales tax dollars to UW.

In addition, the state receives less in federal funds for its Medicaid program because lawmakers have so far opted not to expand coverage as allowed under the federal Affordable Care Act. This factor is notable because it is within the state’s control. But it is not the only contributor to the low ranking for federal aid in Wisconsin, which has long trailed other states in this regard.

Each of these policies bring both advantages and disadvantages. For example, receiving fewer federal dollars means the state is less dependent on the future actions of Congress but more reliant on state and local taxpayers in the present. Ultimately, elected officials and the voters themselves must choose the mix of taxes and other revenues, determine the state’s spending priorities, and then accept the inevitable tradeoffs that come with them.