Wisconsin Transportation: 2011 and Beyond 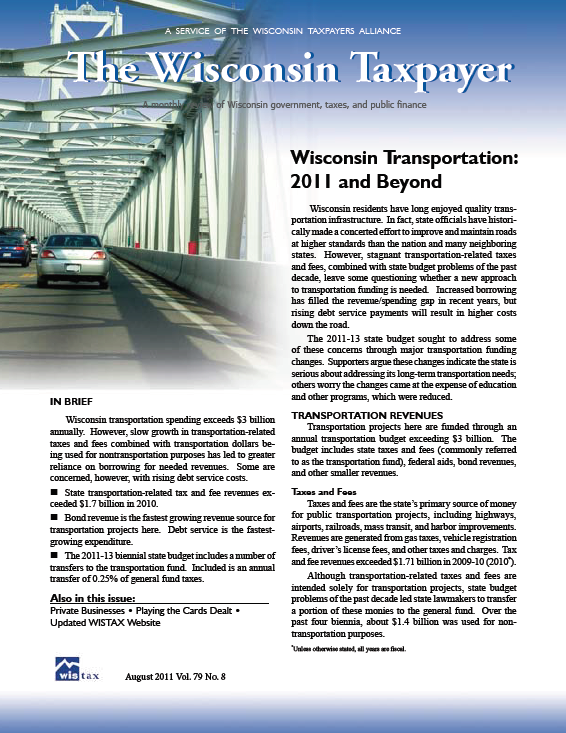 Wisconsin transportation spending exceeds $3 billion annually. However, slow growth in transportation-related taxes and fees combined with transportation dollars being used for nontransportation purposes has led to greater reliance on borrowing for needed revenues. Some are concerned, however, with rising debt service costs.

Wisconsin residents have long enjoyed quality transportation infrastructure. In fact, state officials have historically made a concerted effort to improve and maintain roads at higher standards than the nation and many neighboring states. However, stagnant transportation-related taxes and fees, combined with state budget problems of the past decade, leave some questioning whether a new approach to transportation funding is needed. Increased borrowing has filled the revenue/spending gap in recent years, but rising debt service payments will result in higher costs down the road.
The 2011-13 state budget sought to address some of these concerns through major transportation funding changes. Supporters argue these changes indicate the state is serious about addressing its long-term transportation needs; others worry the changes came at the expense of education and other programs, which were reduced.
TRANSPORTATION REVENUES
Transportation projects here are funded through an annual transportation budget exceeding $3 billion. The budget includes state taxes and fees (commonly referred to as the transportation fund), federal aids, bond revenues, and other smaller revenues.