Window on the Wisconsin State Budget 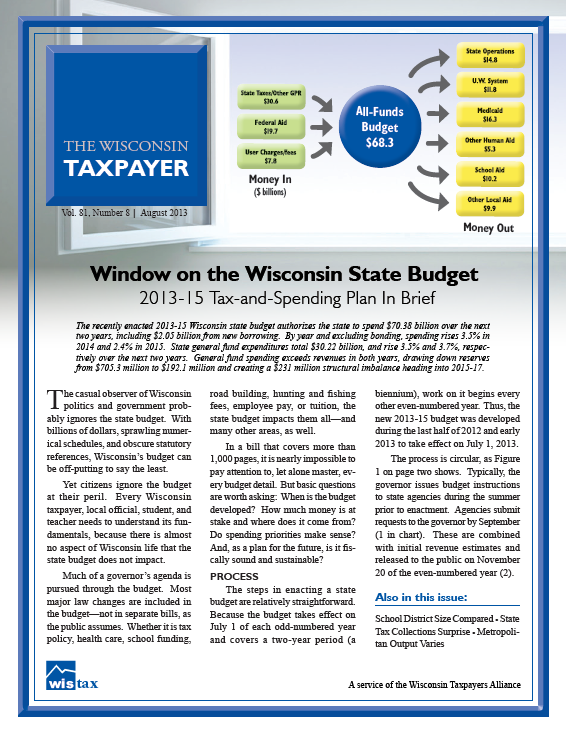 The casual observer of Wisconsin politics and government probably ignores the state budget. With billions of dollars, sprawling numerical schedules, and obscure statutory references, Wisconsin’s budget can be off-putting to say the least.
Yet citizens ignore the budget at their peril. Every Wisconsin taxpayer, local official, student, and teacher needs to understand its fundamentals, because there is almost no aspect of Wisconsin life that the state budget does not impact.
Much of a governor’s agenda is pursued through the budget. Most major law changes are included in the budget—not in separate bills, as the public assumes. Whether it is tax policy, health care, school funding, road building, hunting and fishing fees, employee pay, or tuition, the state budget impacts them all—and many other areas, as well.
In a bill that covers more than 1,000 pages, it is nearly impossible to pay attention to, let alone master, every budget detail. But basic questions are worth asking: When is the budget developed? How much money is at stake and where does it come from? Do spending priorities make sense? And, as a plan for the future, is it fiscally sound and sustainable?
PROCESS
The steps in enacting a state budget are relatively straightforward. Because the budget takes effect on July 1 of each odd-numbered year and covers a two-year period (a biennium), work on it begins every other even-numbered year. Thus, the new 2013-15 budget was developed during the last half of 2012 and early 2013 to take effect on July 1, 2013.
The process is circular, as Figure 1 on page two shows. Typically, the governor issues budget instructions to state agencies during the summer prior to enactment. Agencies submit requests to the governor by September (1 in chart). These are combined with initial revenue estimates and released to the public on November 20 of the even-numbered year (2).