Assessing the options for corrections administration in Milwaukee County 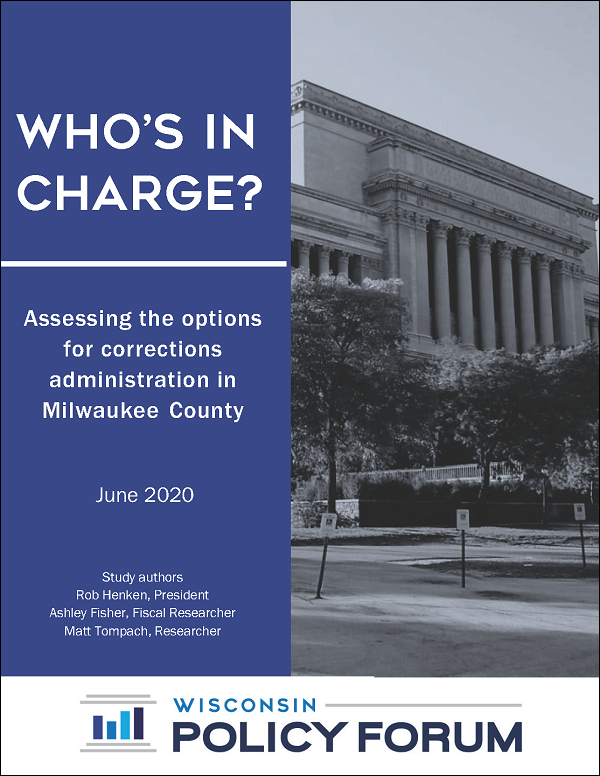 The role of corrections in the United States– and, more specifically, the extent to which the corrections system should focus on punishment versus rehabilitation – has been fiercely debated throughout our nation’s history. While far less emotional, an important debate has raged in Milwaukee County in recent years over who should be responsible for administering the House of Correction (HOC), a county-owned corrections facility that was created to house inmates who have been sentenced for a period of less than one year.

The 1,766-bed HOC, located in Franklin, is one of two corrections institutions administered by the county. The other is the Milwaukee County Jail, a 960-bed facility in downtown Milwaukee that primarily houses inmates who are awaiting trial and sentencing. Because of a variety of factors – including a consent decree that requires the jail population to remain below 960 – the HOC also houses hundreds of pre-trial detainees, and inmates often are moved between the two facilities as county corrections officials seek to safely and responsibly manage the overall corrections population.

Chart 1 shows the average daily population (ADP) at both facilities from 2018 through the end of February 2020 – the latest month before the COVID-19 crisis hit. The HOC’s ADP had decreased substantially since the middle of 2019 and the ADP of 976 at the end of February – while a sharp increase from the month before – was still 30% below the period’s peak of 1,414 in October 2018. The jail’s ADP has been much more consistent, as shown in the chart. The populations of both facilities have dropped sharply since the onset of the pandemic because of deliberate efforts to reduce the county’s corrections population in light of public health concerns; it is too early to tell whether that may be a long-term state of affairs.

Despite the two facilities’ close relationship within the same government and the similarities of their corrections functions, the HOC and jail traditionally have operated under distinct administrative authorities. The HOC has functioned as a department of county government with its superintendent appointed by the county executive and confirmed by the county board. Conversely, while technically a part of county government, the county jail has operated under the administrative authority of the Milwaukee County Sheriff, who is a Constitutionally-elected officer with independent law enforcement powers.

That administrative relationship changed for a brief time beginning in 2009, when oversight of the HOC was shifted to the sheriff. But in May 2013 that shift was reversed, and since that time the HOC has been directly managed by a superintendent who reports to the county executive.

In preparation for that report, leadership across the impacted departments expressed a desire to learn more about the benefits and potential consequences of the administrative shift. They also saw merit in the involvement of a third party facilitator and researcher to assist them in this endeavor and to help achieve consensus on an appropriate path forward.

Consequently, the Wisconsin Policy Forum (WPF) was asked to work with the county executive, sheriff, and comptroller to research and report on issues surrounding the transfer of the HOC from county administration to the sheriff. While this project originally was seen both as a facilitation project and a research endeavor, it became more of the latter after the COVID-19 crisis emerged, which made it impractical to engage the key stakeholders in joint meetings on a regular basis.

In this report, we describe our findings, which were informed by group and individual meetings with the stakeholders and other key informants. We hope this information will be helpful to DAS in preparing its report and to county policymakers as they consider the future governance of the HOC. Continue reading…