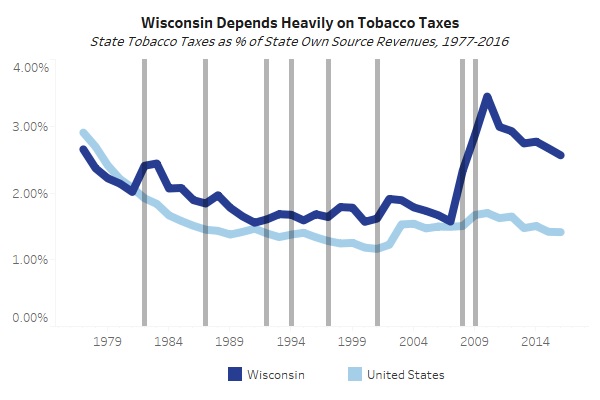 With e-cigarette use soaring, especially among teens, Wisconsin is joining the fast-growing ranks of states that target them for taxation. Democratic Gov. Tony Evers recently signed into law a plan put forward by Republicans controlling the state Legislature that imposes an excise tax on e-cigarette fluid—albeit at a rate tied for the lowest of any state that taxes it. The move comes as Wisconsin’s tax collections from traditional cigarettes, on which it relies more heavily than most states, continue to decline.

The use of e-cigarettes, also called vapor products or “vaping” devices, has boomed in recent years, as traditional cigarette use has continued a decades-long dwindle. Such devices heat fluid—usually containing nicotine derived from tobacco—into a vapor inhaled by the user.

E-cigarettes are subject to state sales tax but not the excise taxes the state collects on traditional cigarettes and other tobacco products, such as cigars or pipe or chewing tobacco.

The plan enacted by Evers and lawmakers as part of the next state budget will change that. Effective Oct. 1, it imposes a five-cent-per-milliliter excise tax on e-cigarette fluid.

But approval of the tax is unlikely to mark the end of Wisconsin’s e-cigarette taxation debate. Other states are scrambling to tax them at higher rates, and their usage—and associated public health concerns—continue to rise.

Wisconsin’s continuing debate on the topic could take into account:

Of at least 20 states that currently tax or recently passed a tax on e-cigarette products – either statewide or in certain jurisdictions – some levy a per-unit excise tax. Some collect an ad valorem tax as a percentage of wholesale or retail price. And some have taxes that can be applied either way based on how the product is sold.

Some states tax only e-cigarette fluid, while others also tax the devices. Four of the states that tax only fluid do so on a per-milliliter basis at a rate of five cents. The remaining states, which tax either fluid only or also devices, have higher effective tax rates on a per-unit or percentage basis ranging as high as 95%.

Evers’ original e-cigarette tax plan, released as part of his budget proposal earlier this year, looked very different than the one he signed. It would have extended to both e-cigarette devices and fluid the excise tax the state currently levies on non-cigarette tobacco products: 71% of the manufacturer’s list, or wholesale, price. This would have given Wisconsin the third-highest e-cigarette tax rate of any state, according to the Tax Foundation, beside Minnesota (95%) and Vermont (92%).

The proposal Evers signed will levy a $1.50 tax on a 30-milliliter bottle of e-cigarette fluid. Under Evers’ original proposal, such a bottle, if priced at $19.99, would have been taxed at $14.19.
As of Jan. 1, nine states and the District of Columbia taxed e-cigarettes, and three more allowed taxes in certain jurisdictions.

That list swelled in 2019, with at least eight states not including Wisconsin approving statewide taxes. One is Illinois, its lawmakers having voted to enact a 15% e-cigarette tax that took effect July 1.

The state’s reliance on tobacco tax revenue increasingly is undermined by declining use of traditional cigarettes. After hiking cigarette taxes back-to-back in 2008 and 2009 by a combined $1.75 per pack, Wisconsin has the 12th-highest cigarette tax, at $2.52 per pack, in the nation.

Figure 1 shows tobacco taxes in Wisconsin as a share of general revenues raised from taxes, fees, and other sources in the state, comparing this percentage to the average of other states around the nation.

Yet the amount of revenue the state collects from cigarettes, its main source of tobacco-tax revenue, has been declining, matching a national decline in smoking rates.

In May, an estimate from the state’s nonpartisan Legislative Fiscal Bureau revised projections for cigarette tax revenues downward amid signs that the revenue slide is accelerating. The state collected about $539 million from cigarette taxes in the 2018 fiscal year, down from a peak of $644 million in 2010.

Evers says his proposal would help combat what federal authorities say is a startling rise in e-cigarette use by minors. The FDA recently reported that, between 2017 and 2018 alone, the use of vapor products by high school students increased 78%, and by 48% among middle school students.

In Wisconsin, e-cigarette use among high school students increased tenfold in just the last six years, according to the state’s Wisconsin Youth Tobacco Survey. More than one in five teens currently use them, or more than four times as many as now use traditional cigarettes.

Using data from a survey of Wisconsin high school students asking if they used tobacco products in the last 30 days, Figure 2 shows reported use of traditional cigarettes has plummeted since 2000. Meanwhile, since 2012, reported e-cigarette use sharply increased.

Reduced consumption of traditional cigarettes also has been shown to result in less health care utilization, including among Medicaid recipients who smoke at higher rates and whose health care costs are borne in part by the state, according to the University of Wisconsin Center for Tobacco Research and Intervention.

But e-cigarette tax critics see the issue differently, with some noting tobacco taxes disproportionately are paid by low earners. Some also say a new tax on e-cigarettes could hinder smokers’ access to a less harmful alternative to traditional cigarettes.

The relative novelty of e-cigarettes means many questions about their health effects remain unresolved. Initial evidence suggests that while e-cigarettes are not without health risks, they are likely to be far less harmful than traditional cigarettes, according to a 2018 report from the National Academies of Sciences, Engineering, and Medicine, which was conducted by a committee that examined over 800 peer-reviewed scientific studies.

There is at least some evidence that vaping can help smokers quit traditional cigarettes long-term, that report found.

But while e-cigarettes may offer an off-ramp for habitual smokers of traditional cigarettes, there are signs they may be the opposite for young people who didn’t previously smoke. The National Academies study found “substantial evidence” that e-cigarette use among youth “increases the risk of transitioning to smoking conventional cigarettes.”

This session the governor and lawmakers agreed with each other—and with policymakers in a growing number of states—on the need to tax e-cigarette products. But there remains a wide gap on how they prefer to do so. And growing e-cigarette use and continued declines in tax revenue from traditional cigarettes mean the issue isn’t going away.

As with most debates on taxation, policymakers must weigh the issue from both a fiscal and policy perspective. On the fiscal side, it could be asked whether it is appropriate to augment the state’s reliance on what could be another volatile source of tobacco-related tax revenue—and if the answer is yes, if a five-cent-per-milliliter tax is the appropriate rate at which to do so. On the policy side, public health considerations are at the fore, and different implications for adult smokers and teens make for competing considerations for elected officials.