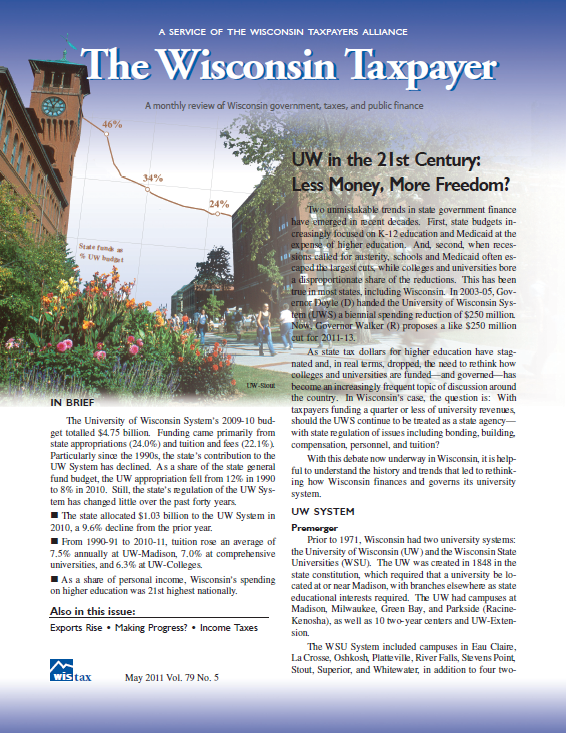 The University of Wisconsin System’s 2009-10 budget totalled $4.75 billion. Funding came primarily from state appropriations (24.0%) and tuition and fees (22.1%). Particularly since the 1990s, the state’s contribution to the UW System has declined. As a share of the state general fund budget, the UW appropriation fell from 12% in 1990 to 8% in 2010. Still, the state’s regulation of the UW System has changed little over the past forty years.

Two unmistakable trends in state government finance have emerged in recent decades. First, state budgets increasingly focused on K-12 education and Medicaid at the expense of higher education. And, second, when recessions called for austerity, schools and Medicaid often escaped the largest cuts, while colleges and universities bore a disproportionate share of the reductions. This has been true in most states, including Wisconsin. In 2003-05, Governor Doyle (D) handed the University of Wisconsin System (UWS) a biennial spending reduction of $250 million. Now, Governor Walker (R) proposes a like $250 million cut for 2011-13.
As state tax dollars for higher education have stagnated and, in real terms, dropped, the need to rethink how colleges and universities are funded—and governed—has become an increasingly frequent topic of discussion around the country. In Wisconsin’s case, the question is: With taxpayers funding a quarter or less of university revenues, should the UWS continue to be treated as a state agency—with state regulation of issues including bonding, building, compensation, personnel, and tuition?
With this debate now underway in Wisconsin, it is helpful to understand the history and trends that led to rethinking how Wisconsin finances and governs its university system.