Under the Gun on Conservation Funding 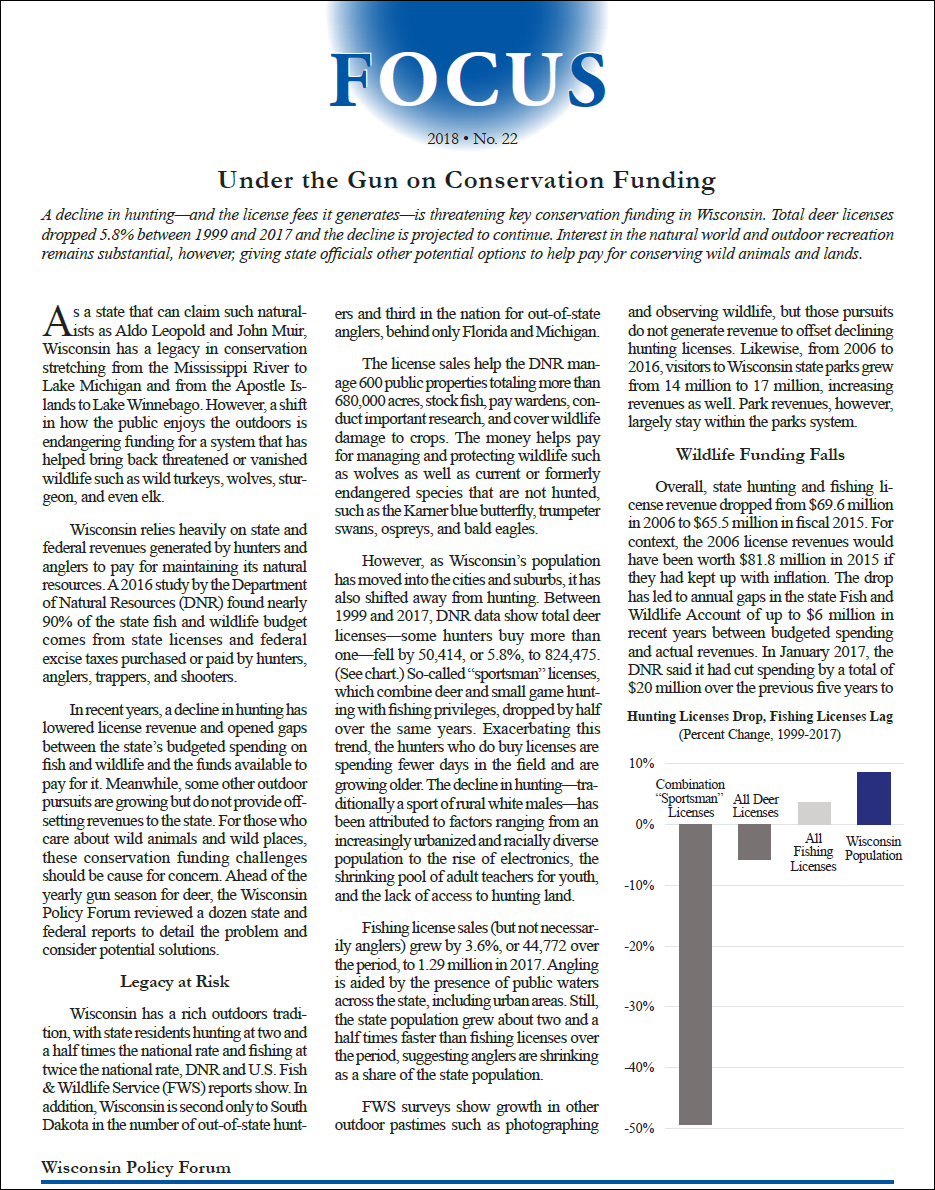 A decline in hunting – and the license fees it generates – is threatening key conservation funding in Wisconsin. Total deer licenses dropped 5.8% between 1999 and 2017 and the decline is projected to continue. Interest in the natural world and outdoor recreation remains substantial, however, giving state officials other potential options to help pay for conserving wild animals and lands.

As a state that can claim such naturalists as Aldo Leopold and John Muir, Wisconsin has a legacy in conservation stretching from the Mississippi River to Lake Michigan and from the Apostle Islands to Lake Winnebago. However, a shift in how the public enjoys the outdoors is endangering funding for a system that has helped bring back threatened or vanished wildlife such as wild turkeys, wolves, sturgeon, and even elk.

Wisconsin relies heavily on state and federal revenues generated by hunters and anglers to pay for maintaining its natural resources. A 2016 study by the Department of Natural Resources (DNR) found nearly 90% of the state fish and wildlife budget comes from state licenses and federal excise taxes purchased or paid by hunters, anglers, trappers, and shooters.

In recent years, a decline in hunting has lowered license revenue and opened gaps between the state’s budgeted spending on fish and wildlife and the funds available to pay for it. Meanwhile, some other outdoor pursuits are growing but do not provide offsetting revenues to the state. For those who care about wild animals and wild places, these conservation funding challenges should be cause for concern. Ahead of the yearly gun season for deer, the Wisconsin Policy Forum reviewed a dozen state and federal reports to detail the problem and consider potential solutions.

Wisconsin has a rich outdoors tradition, with state residents hunting at two and a half times the national rate and fishing at twice the national rate, DNR and U.S. Fish & Wildlife Service (FWS) reports show. In addition, Wisconsin is second only to South Dakota in the number of out-of-state hunters and third in the nation for out-of-state anglers, behind only Florida and Michigan.

The license sales help the DNR manage 600 public properties totaling more than 680,000 acres, stock fish, pay wardens, conduct important research, and cover wildlife damage to crops. The money helps pay for managing and protecting wildlife such as wolves as well as current or formerly endangered species that are not hunted, such as the Karner blue butterfly, trumpeter swans, ospreys, and bald eagles.

However, as Wisconsin’s population has moved into the cities and suburbs, it has also shifted away from hunting. Between 1999 and 2017, DNR data show total deer licenses – some hunters buy more than one – fell by 50,414, or 5.8%, to 824,475. (See chart.) So-called “sportsman” licenses, which combine deer and small game hunting with fishing privileges, dropped by half over the same years. Exacerbating this trend, the hunters who do buy licenses are spending fewer days in the field and are growing older. The decline in hunting – traditionally a sport of rural white males – has been attributed to factors ranging from an increasingly urbanized and racially diverse population to the rise of electronics, the shrinking pool of adult teachers for youth, and the lack of access to hunting land.

Fishing license sales (but not necessarily anglers) grew by 3.6%, or 44,772 over the period, to 1.29 million in 2017. Angling is aided by the presence of public waters across the state, including urban areas. Still, the state population grew about two and a half times faster than fishing licenses over the period, suggesting anglers are shrinking as a share of the state population.

FWS surveys show growth in other outdoor pastimes such as photographing and observing wildlife, but those pursuits do not generate revenue to offset declining hunting licenses. Likewise, from 2006 to 2016, visitors to Wisconsin state parks grew from 14 million to 17 million, increasing revenues as well. Park revenues, however, largely stay within the parks system.

Overall, state hunting and fishing license revenue dropped from $69.6 million in 2006 to $65.5 million in fiscal 2015. For context, the 2006 license revenues would have been worth $81.8 million in 2015 if they had kept up with inflation. The drop has led to annual gaps in the state Fish and Wildlife Account of up to $6 million in recent years between budgeted spending and actual revenues. In January 2017, the DNR said it had cut spending by a total of $20 million over the previous five years to help balance the budget, leading to reduced habitat management, warden patrols, invasive species control, and other activities.

Between fiscal 1999 and 2017, the full-time DNR staff paid out of the Fish and Wildlife Account dropped by 144.1 positions, or 20.8%, to 549.6. To add to the problem, the account also relies on federal excise taxes on firearms, ammunition, and fishing gear, which could also be impacted by lagging or falling participation rates in hunting and fishing.

To address these shortfalls, policymakers could consider both spending cuts and ways to maintain existing license revenues, such as adjusting fees for inflation (Wisconsin’s fishing licenses as of 2016 were priced similarly to neighboring states and deer licenses were cheaper for both residents and non-residents); reducing or rescinding discounts for first-time or senior license purchasers; re-engaging inactive hunters; and expanding learn-to-hunt programs. These classes have shown some promise in recruiting urban residents who are interested in hunting and fishing as a way of obtaining high-quality local meat and fish.

Ultimately, state officials will likely have to consider reaching out to other groups such as hikers or birdwatchers who enjoy Wisconsin’s natural resources but traditionally have not been asked to directly help fund state wildlife programs. Proposals floated in past DNR studies and used by other states include charging for admission to state natural, fishery, and wildlife areas that are separate from the state parks already charging fees; requiring a fee for non-motorized watercraft such as canoes and paddleboards; or funding conservation in part by using a portion of sales tax or lottery revenue, as Minnesota does.

A 2006 Legislative Audit Bureau report – now dated but still the most recent of its kind nationally – found Wisconsin was among the top 10 states for the heaviest reliance on hunters and anglers for funding conservation. Outdoor recreation, however, is changing and some state policies may have to shift along with it.