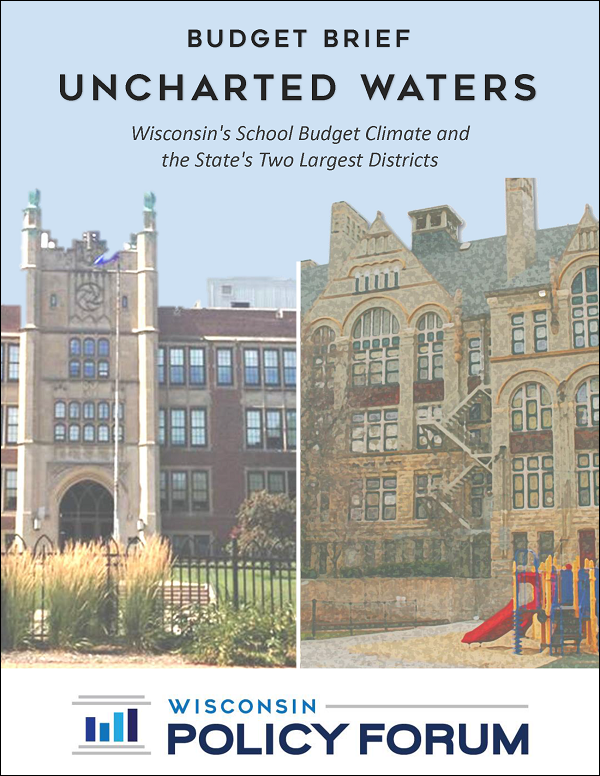 School districts in Wisconsin find themselves in a strange financial position at present, caught between state austerity and federal largesse. On the one hand, lawmakers have essentially frozen most state and local revenues for districts for both years of the current state budget, and accelerated drops in school enrollment due to the pandemic will add to this strain over the long term. On the other hand, the federal government has poured a massive amount of one-time pandemic aid into many districts, including Milwaukee and Madison. In addition, both of those districts and hundreds of others in Wisconsin have approved referenda in recent years to raise their local property taxes beyond what state law would otherwise allow.

This odd dichotomy between the state and federal approaches makes it difficult to provide a simple answer for how districts as a whole, or even a single district, are faring financially. The answer depends in part on whether the district has passed a recent referendum or qualified for large amounts of federal pandemic aid. It also depends on the type of spending districts feel compelled to pursue – a district may be struggling with ongoing costs such as a raise for teachers but able to use federal aid to afford purchases such as the materials for a new reading curriculum.

In this new report on school district budgets for the 2022-23 school year, we seek to provide a more complete view of both the positive and negative forces affecting school finances in Wisconsin, with a particular focus on the state’s two largest districts. Since 2013, the Wisconsin Policy Forum has produced an annual report on the superintendent’s proposed Milwaukee Public Schools (MPS) budget that analyzes and describes the key elements and provides an independent assessment for school board members as they deliberate its contents. Since 2020, we have produced a similar brief for the budget proposal from the superintendent of the Madison Metropolitan School District (MMSD).

For the second year in a row, we are combining these briefs, which allows readers to see how the two districts are similar in some respects and very different in others. For example, both districts face major challenges from the pandemic itself, including student learning loss and mental health concerns, as well as obstacles posed by state revenue caps and enrollment losses. Both districts have also received a boost from an influx of federal aid and a successful local referendum, but there are some differences – and some similarities – in how they are spending those funds.

We have also constructed this report to include insights that will be germane to districts throughout Wisconsin. Those districts may not be receiving the same levels of federal aid enjoyed by MMSD and MPS or the same opportunities afforded by their referenda, but they face many of the same impacts from the state budget and to some degree the difficult trends in enrollment as well. We hope these insights will provide important perspective for communities as they consider how to address these complex issues within their local districts in a challenging time. Continue reading…