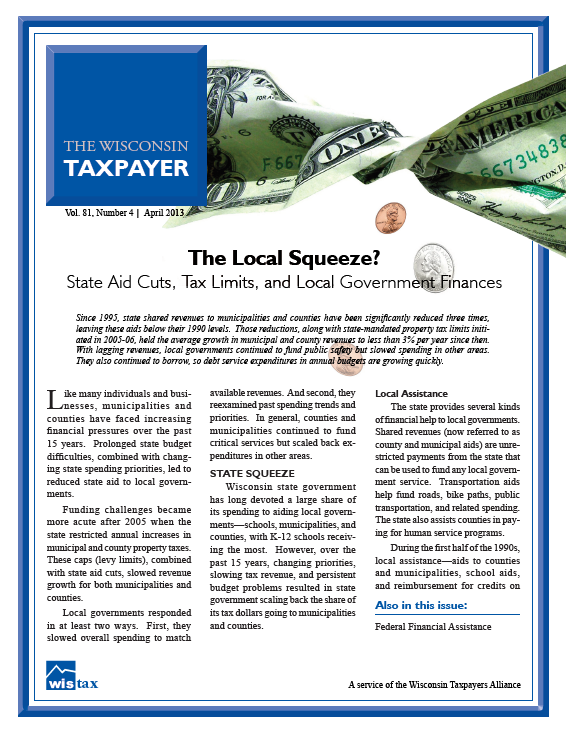 Since 1995, state shared revenues to municipalities and counties have been significantly reduced three times, leaving these aids below their 1990 levels. Those reductions, along with state-mandated property tax limits initiated in 2005-06, held the average growth in municipal and county revenues to less than 3% per year since then. With lagging revenues, local governments continued to fund public safety but slowed spending in other areas. They also continued to borrow, so debt service expenditures in annual budgets are growing quickly.

Like many individuals and businesses, municipalities and counties have faced increasing financial pressures over the past 15 years. Prolonged state budget difficulties, combined with changing state spending priorities, led to reduced state aid to local governments.
Funding challenges became more acute after 2005 when the state restricted annual increases in municipal and county property taxes. These caps (levy limits), combined with state aid cuts, slowed revenue growth for both municipalities and counties.
Local governments responded in at least two ways. First, they slowed overall spending to match available revenues. And second, they reexamined past spending trends and priorities. In general, counties and municipalities continued to fund critical services but scaled back expenditures in other areas.
STATE SQUEEZE
Wisconsin state government has long devoted a large share of its spending to aiding local governments—schools, municipalities, and counties, with K-12 schools receiving the most. However, over the past 15 years, changing priorities, slowing tax revenue, and persistent budget problems resulted in state government scaling back the share of its tax dollars going to municipalities and counties.