Is It Still a Reliable Revenue Source? 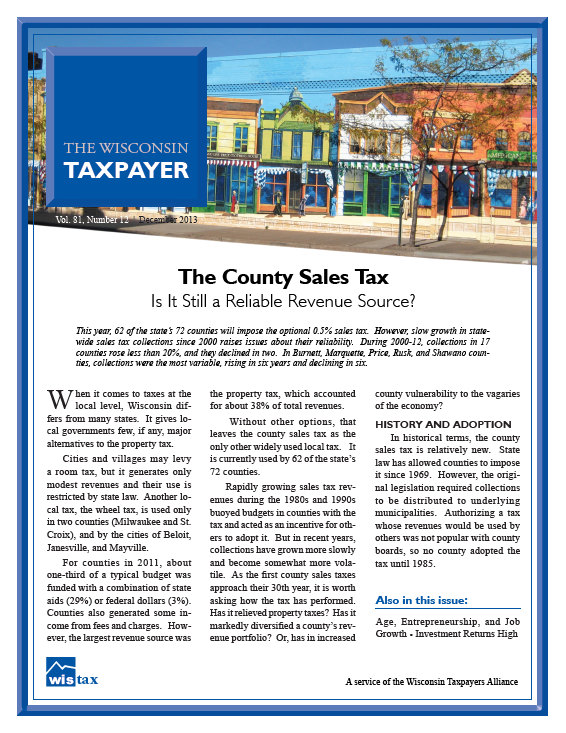 This year, 62 of the state’s 72 counties will impose the optional 0.5% sales tax. However, slow growth in statewide sales tax collections since 2000 raises issues about their reliability. During 2000-12, collections in 17 counties rose less than 20%, and they declined in two. In Burnett, Marquette, Price, Rusk, and Shawano counties, collections were the most variable, rising in six years and declining in six.

When it comes to taxes at the local level, Wisconsin differs from many states. It gives local governments few, if any, major alternatives to the property tax.
Cities and villages may levy a room tax, but it generates only modest revenues and their use is restricted by state law. Another local tax, the wheel tax, is used only in two counties (Milwaukee and St. Croix), and by the cities of Beloit, Janesville, and Mayville.
For counties in 2011, about one-third of a typical budget was funded with a combination of state aids (29%) or federal dollars (3%). Counties also generated some income from fees and charges. However, the largest revenue source was the property tax, which accounted for about 38% of total revenues.
Without other options, that leaves the county sales tax as the only other widely used local tax. It is currently used by 62 of the state’s 72 counties.
Rapidly growing sales tax revenues during the 1980s and 1990s buoyed budgets in counties with the tax and acted as an incentive for others to adopt it. But in recent years, collections have grown more slowly and become somewhat more volatile. As the first county sales taxes approach their 30th year, it is worth asking how the tax has performed. Has it relieved property taxes? Has it markedly diversified a county’s revenue portfolio? Or, has in increased county vulnerability to the vagaries of the economy?