Should MMSD’s Privatization Framework Be Revisited? 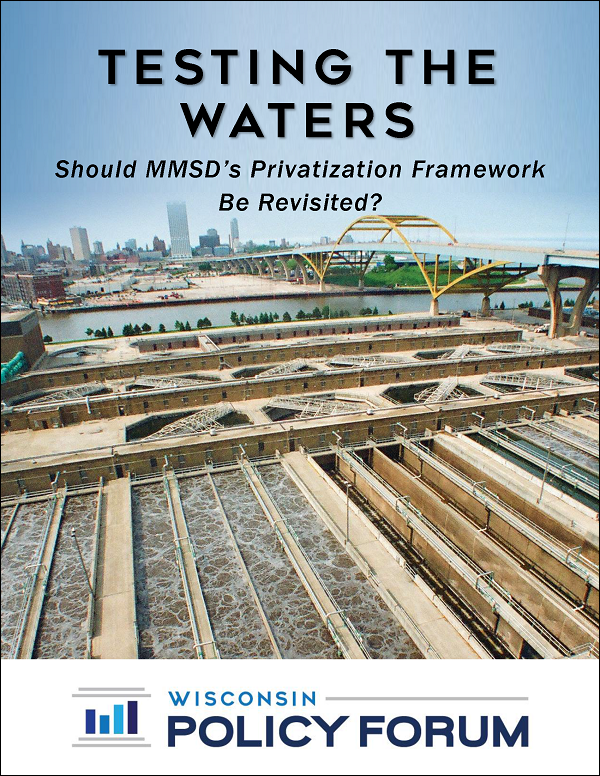 Eleven years ago, the Wisconsin Policy Forum published Downstream Accomplishments, Upstream Challenges, the fourth in a series of reports analyzing the finances of metro Milwaukee’s largest local governments. This report focused on the fiscal condition of the Milwaukee Metropolitan Sewerage District (MMSD) and found that “overall, as measured by commonly used fiscal indicators, MMSD enjoys sound fiscal health and appears well-positioned for the future.”

An important observation in the 2011 report was that MMSD differed from other governmental entities in that its “decision to outsource most of its operations has greatly reduced operating budget pressures and risk.” The outsourcing decision was made in 1998, when MMSD’s leadership entered into a contract with United Water Services to operate the district’s sewers, two treatment plants, and the production of Milorganite, an organic fertilizer produced from waste material and sold by MMSD. In 2008, the district transferred the 10-year operating contract to Veolia Water Milwaukee, and that contract was renewed for another 10 years in 2018.

Our favorable assessment of MMSD’s privatized operational framework stemmed largely from the stability associated with a 10-year operating contract, which largely shielded the district from large, unforeseen operating budget spikes; as well as the significant experience and expertise that both private vendors brought to MMSD’s operations, which yielded operational efficiencies and allowed for lower staffing levels.

At the same time, we warned that “the substantial savings associated with private operations were realized with the first contract. Consequently, as MMSD grapples with… the realities of a potential small bidding pool (for subsequent contracts), it must recognize that its future ability to wring financial savings out of its operations contract may be limited.”

It is also important to note that the current 10-year contract with Veolia establishes a projected profit margin for the private company, which had not been specifically delineated in the previous 10-year contract. As a result, the financial benefits associated with privatization may have diminished from those we reported in 2011.

Amid a changing financial landscape and with a new contract still several years away, MMSD leaders have now asked WPF to conduct an analysis to help inform their decision on whether to contract once again with a private vendor. This report is the culmination of that broad analysis. Using a comprehensive review of MMSD data sources, consideration of privatization efforts in other jurisdictions across the U.S., and interviews with MMSD and Veolia officials, we assess the financial impacts of MMSD’s privatization decision and explore whether benefits the district has realized can be sustained in the future. While our emphasis is on financial considerations, we also explore to a limited extent how the district’s operational objectives have been impacted by its decision to outsource.

In our concluding section, we reflect on our research findings and attempt to frame for MMSD leaders and stakeholders how they should approach their upcoming deliberations. We do not advocate for or against specific courses of action, but instead seek to objectively frame the decision-making process in a manner that hopefully will be useful to MMSD leaders and outside stakeholders as they consider the path forward. Continue reading…