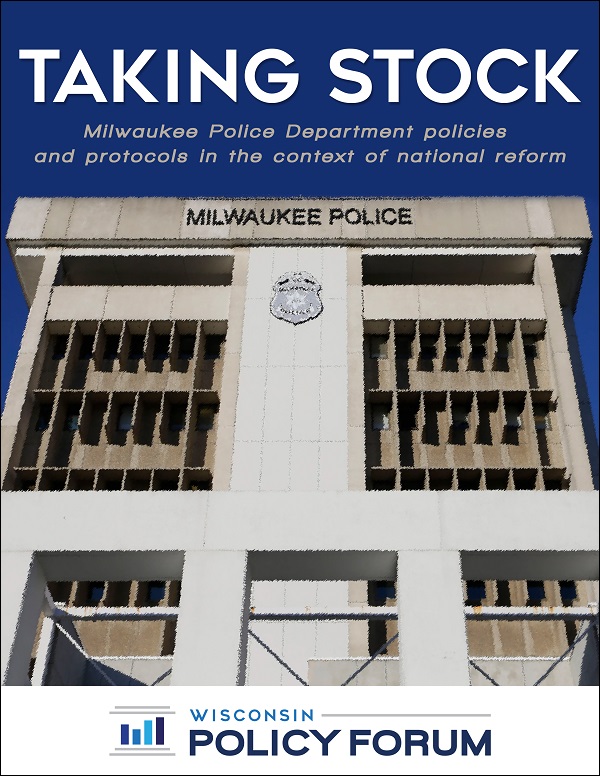 The issue of police reform is not new to the city of Milwaukee. Long before the May 2020 death of George Floyd in Minneapolis and the ensuing national and local protests, Milwaukee had encountered several of its own high-profile incidents of alleged police misconduct. Those incidents generated calls for action from community members, including demands for changes to police training and protocols as well as increased community oversight.

The calls for police reform have not gone unnoticed by city officials. In late 2017, the Milwaukee Common Council established the Collaborative Community Committee (CCC), a group that was charged with soliciting the views of Milwaukee residents on police conduct and police-community relations and developing reform recommendations. The CCC’s report, delivered in April 2019, identified 11 themes that cut across the individual responses and made recommendations in four broad areas of Milwaukee Police Department (MPD) practices and conduct.

As additional high-profile incidents involving injury or death in police custody have occurred both nationally and locally, calls for police reform have now intensified. The nationwide protests that erupted after Floyd’s death, including many in Milwaukee, not only amplified calls for reform of police practices with regard to individuals they encounter, but they also engendered new scrutiny of police response to demonstrations and protests.

In light of these strengthened and expanded calls for police reform, the Wisconsin Policy Forum was asked by Milwaukee Mayor Tom Barrett to conduct research that would help frame reform discussions in Wisconsin’s largest city. In this report, we do so by exploring where MPD stands in terms of prominent police reforms being pursued nationally or suggested locally, as well as how the department compares to peer cities with regard to certain key protocols, practices, and policies.

Our purpose is to synthesize and explain police reform proposals in a way that will enhance the understanding of policymakers and members of the community. Greater understanding of the national police reform landscape and how MPD fits in will assist them in considering and prioritizing both short-term and longer-term policy changes that will bolster the performance of MPD and its relationship with city residents and enhance the safety of all Milwaukee neighborhoods.

"With a strengthened use of force policy, new report points out other areas of potential reform in the Milwaukee Police Department" [1]Milwaukee Journal Sentinel
"How Milwaukee Police Reforms Compare To Other Cities" [2]WUWM - Milwaukee's NPR
Source URL: https://wispolicyforum.org/research/taking-stock-milwaukee-police-department-policies-and-protocols-in-the-context-of-national-reform/