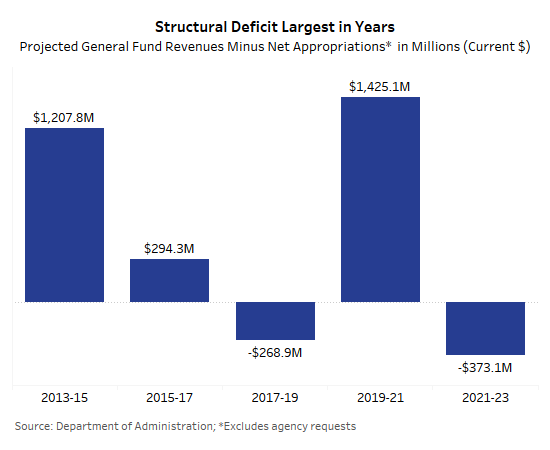 Next year, Wisconsin Governor Tony Evers and newly elected lawmakers likely will confront the state’s toughest budget challenge since 2011. To balance the next two-year state budget, we find the state’s main fund would need to spend down its reserves by nearly $400 million even in the unlikely event that elected officials reject every new spending request from state agencies. The state does have substantial reserves to lean on but also faces massive additional costs for state health programs for those in need.

When Gov. Tony Evers unveils his proposed 2021-23 budget early next year, he will do so amid elevated unemployment, slowing state tax collections, and the spending pressures created by an ongoing pandemic and increased demand for social services. How well will the state’s finances hold up to the strain?

To examine this question, the Wisconsin Policy Forum started with the state’s projected increases in tax collections along with its base spending levels. After including routine adjustments for debt payments and employee compensation but excluding all new spending requests by state agencies, we find general fund spending is currently projected to exceed revenues by $373.1 million in the two-year budget running from July 2021 to June 2023. To make up the difference – equal to about 1% of spending over the two years – the state would have to spend down reserves, adopt spending cuts or tax increases, delay payments for certain obligations, or draw on some other new source such as additional federal aid.

Our bare-bones tally did not factor in the projected expense of maintaining current services within Medicaid health programs – more than $1.1 billion over the next two years – or include additional spending on pandemic response, state aid to K-12 schools or local governments, prisons, or the University of Wisconsin System. New spending in at least some of these areas appears inevitable, particularly in the case of Medicaid, and will add to the challenge substantially.

In one bright spot, the state expects to finish the current 2021 fiscal year with reserves of roughly $2 billion – much more than was expected a year ago or was available in the past two recessions. However, Evers has proposed spending $541 million on pandemic response in the coming months and GOP lawmakers have proposed up to $100 million, which if approved in either case would reduce that total.

For now, these are mere projections and all forecasts should be taken with great caution in this volatile time. Further action by the federal government might improve the state’s position specifically or the economy more broadly while federal inaction and a spike in coronavirus cases could cause the economy – and state budget – to deteriorate even more.

Our analysis starts with the Nov. 20 budget report from the Department of Administration, which presents its own version of the state’s fiscal gap. According to longstanding custom, the report’s 2021-23 budget projections include all the spending requests made by state agencies, even though the report acknowledges it is “highly unlikely” that all of them will be approved.

To address that, this brief takes the general fund net appropriations for 2022 and 2023, subtracts new agency requests, and then compares that potential spending to projected tax and fee revenues for each of those years (see Table 1). We find the next state budget has a potential shortfall, or structural deficit, of $520.1 million in year one that is only partly made up in the second year of the budget, leaving the state with a $373.1 million shortfall for the full 2021-23 budget cycle. As laid out in the table, that shortfall would grow considerably if a huge projected increase in public assistance costs is taken into account, and even further if the governor and lawmakers provide additional funds for K-12 education and other programs.

As Figure 1 shows, the potential shortfall heading into the 2021-23 budget is the largest in years. It is important to note that, rather than final amounts, the chart shows the potential shortfall or surplus heading into each budget cycle before elected officials approve measures that would affect it, such as new spending, tax cuts or increases, or the use of reserves.

This structural deficit calculation includes some routine spending adjustments for the state’s debt service and employee compensation costs. Yet it does not factor in any potential tax credit payments for the Foxconn project in Racine County or additional costs for public assistance programs like Medicaid, which have seen a surge in enrollments due to the economic downturn and higher unemployment. Medicaid represents the single biggest driver of new state spending and, as a joint federal-state program, the state has less discretion to make changes and spending cuts in this area.

As Table 1 shows, the state Department of Health Services estimates that Medicaid will require an additional $1.15 billion in state general purpose revenue and related funds over the next two years – more than twice as much as just two years ago. The expected increase is due to a number of factors such as changes in federal reimbursement rates and patient usage levels, but mainly reflects the growth in enrollments.

Together, the existing structural deficit in the state budget and the cost to continue Medicaid services at current levels add up to a more than $1.5 billion potential shortfall over the two years. The table also shows that adding just half the dollar increase for K-12 schools that was included in the current state budget plus 1% annual growth in other GPR spending such as prisons and the UW System would push the gap above $2 billion.

To close its potential budget gap, the state could turn to several potential sources besides the usual spending cuts or tax increases. Most notably, on June 30, 2021, the state is projected to have combined balances of roughly $2 billion in its general and rainy day funds – the most in decades (see Figure 2).

However, that amount would be reduced if the state spends the $541 million proposed by Evers or $100 million proposed by Republicans on COVID-19 response this year. In addition, state officials may not want to commit all of the state’s remaining reserves in the next budget given the uncertainty surrounding the length of the pandemic and its economic fallout.

In addition to its reserves, the state might be able to draw on funds from a potential new federal coronavirus relief package to help close the gap. State elected officials also could consider expanding Wisconsin’s Medicaid program using additional funds available through the federal Affordable Care Act, which would save a projected $588.3 million over the two-year budget, according to DHS. However, the prospects for a new federal aid package are uncertain, and state lawmakers have repeatedly rejected proposals to expand Medicaid.

With the pandemic still spreading, all of these projections remain awash in uncertainty. On the one hand, the state’s tax collections could falter or dire new spending needs could develop. On the other, the situation could also improve if a vaccine and additional federal legislation help to bring about a recovery.

There is little question, however, that state officials will face difficult choices next year as they seek to overcome the budget gap and the dire effects of COVID-19. The state has faced major shortfalls before – including in 2009 and 2011 – but in both those years one party controlled the governor’s mansion and Legislature. The present difficulties must be addressed by a divided government amid mounting political polarization, suggesting the state may be facing its most arduous budget deliberations in recent memory.