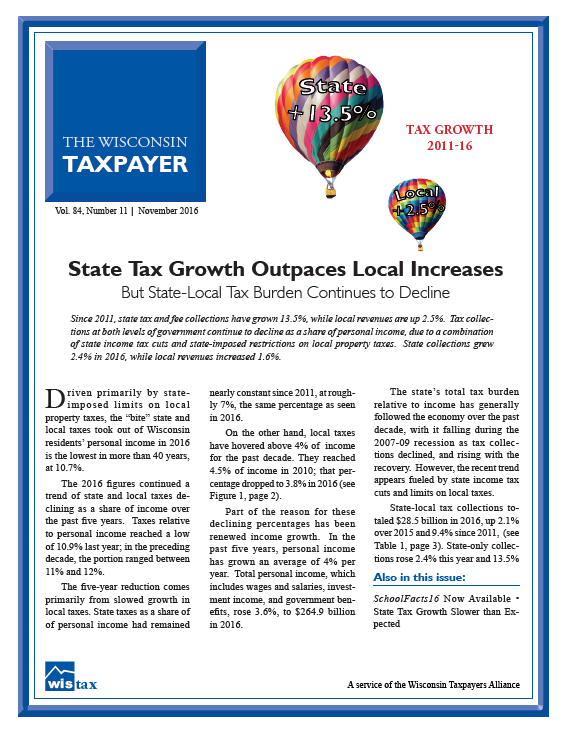 Driven primarily by state-imposed limits on local property taxes, the “bite” state and local taxes took out of Wisconsin residents’ personal income in 2016 is the lowest in more than 40 years, at 10.7%.
The 2016 figures continued a trend of state and local taxes declining as a share of income over the past five years. Taxes relative to personal income reached a low of 10.9% last year; in the preceding decade, the portion ranged between 11% and 12%.
The five-year reduction comes primarily from slowed growth in local taxes. State taxes as a share of personal income had remained nearly constant since 2011, at roughly 7%, the same percentage as seen in 2016.
On the other hand, local taxes have hovered above 4% of income for the past decade. They reached 4.5% of income in 2010; that percentage dropped to 3.8% in 2016 (see Figure 1, page 2).
Part of the reason for these declining percentages has been renewed income growth. In the past five years, personal income has grown an average of 4% per year. Total personal income, which includes wages and salaries, investment income, and government benefits, rose 3.6%, to $264.9 billion in 2016.
The state’s total tax burden relative to income has generally followed the economy over the past decade, with it falling during the 2007-09 recession as tax collections declined, and rising with the recovery. However, the recent trend appears fueled by state income tax cuts and limits on local taxes.