How legislatures are responding to the COVID-19 crisis 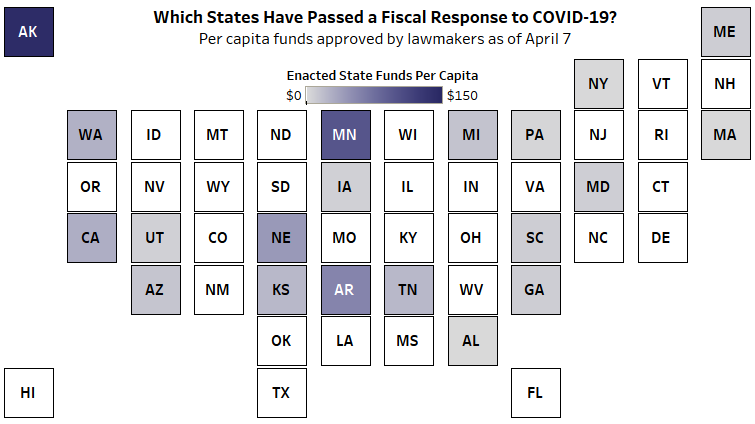 More than half of U.S. state legislatures have enacted or are advancing fiscal measures to respond to the COVID-19 crisis, including three of Wisconsin’s neighbors. Here, Gov. Tony Evers has proposed a package that would rank among the largest in any state so far, while legislative leaders are poised to convene a virtual extraordinary session to take up their own proposal. Key considerations are the amount of state resources needed to supplement federal aid, and how to balance spending on health-related, economic, and fiscal needs.

While the federal CARES Act has received the lion’s share of the attention when it comes to the legislative response to the COVID-19 crisis, state governments across the U.S. also are taking action. A Forum analysis of states’ legislation and information provided by the National Conference of State Legislatures shows 19 states had allocated more than $3 billion to respond to the crisis as of April 10, with some of those, plus six more states, taking up bills to provide nearly $400 million in additional funds. One more state, Idaho, transferred funds from its reserves to cover a potential revenue shortfall. These totals do not include a possible new proposal here in Wisconsin.

The economic fallout from the crisis ultimately may require both new appropriations and corrective action to repair state budget holes. For now, most states that have taken legislative fiscal action are addressing the immediate imperative to fund health care, public health, and other emergency-management needs. These actions come as federal policymakers have provided funding to help states respond to the crisis, though it’s not clear precisely when they’ll receive it.

Health-related focus in other states

Among Wisconsin’s neighbors, policymakers in Minnesota and Michigan each have provided hundreds of millions of state dollars to bolster their public health systems and help their health care providers prepare for a surge of COVID-19 patients. Both of these states, like Wisconsin, have divided government with split party control of the governor’s office and Legislature, and both enacted the measures on a bipartisan basis. Iowa has passed a more modest package that funds testing and other response to the virus.

Our review of all states that enacted COVID-19 aid packages reveals that many others are appropriating funds for similar purposes. Some have granted their governors wide latitude to spend state dollars to battle COVID-19.

See the figure below for a look at our analysis of all state legislatures’ fiscal responses, using state funds, for COVID-19 response.

Michigan has appropriated $150 million from its general fund through a package primarily to fund a public health response, with a potential additional $10 million still pending. Minnesota also has tapped its state general fund to provide about $550 million for public health, health care providers, small business aid, and other uses. The Minnesota Department of Health has already awarded $50 million of those funds via emergency health care grants to nearly 350 provider organizations to prepare for and respond to the COVID-19 pandemic.

In this state, the need for additional public health and health care resources is similarly paramount. State and local public health agencies have begun ramping up programs that could help to monitor and suppress the virus that causes COVID-19. And the Wisconsin Hospital Association has advised policymakers of urgent needs for its members on the front lines of the crisis. They include a shortage of personal protective equipment for health workers, a shortage of supplies to test for the virus that causes COVID-19, and a serious revenue crunch for health care providers who have followed federal guidance to postpone many elective procedures to free up health care system capacity.

However, some policymakers in Wisconsin appear inclined to focus their initial response on areas that extend beyond public health. Evers has offered two sweeping proposals to address the crisis. On the health care side, the measures include funding for general public health, emergency management, health care provider capacity to treat COVID-19 patients, and Medicaid health care programs. But they also include aid to individuals and businesses facing economic harm, assistance to local governments, and a number of policy provisions with no dollars attached.

Even relative to the sizable sums enacted or debated in other states, the Evers package – with a price tag topping $1 billion coming from the state’s general fund — would be enormous in scope and cost.

It would be among the biggest of any state response as quantified by NCSL, with the only other state coming close being the nation’s largest, California. That state has authorized about $1.1 billion in spending in response to the crisis, and has given Gov. Gavin Newsom broad authority to spend much of it.

The figure of about $1 billion for the Evers proposals actually understates their total cost. That’s because they contain multiple open-ended “sum-sufficient” appropriations, including for public health and unemployment claims, in which spending is not capped and state agencies would be permitted to spend as much as needed to respond to the crisis. However, all of this proposed spending might not deplete state coffers, as federal relief funds could offset much of it. The measures also include $725 million in bond refinancing authority and $100 million in new borrowing authority to cover potentially higher costs on state building projects if they are held up by the crisis.

Wisconsin legislative leaders have rejected Evers’ proposals, initially saying that they wanted to first see what aid the state would receive from the federal government before deciding how the state should respond. In recent days, lawmakers have crafted their own proposal and announced plans to hold a virtual extraordinary session on COVID-19 response beginning Tuesday.

GOP lawmakers released a proposal Monday that would adjust some policies and enable the state to access federal funding for COVID-19 response, including for Medicaid and unemployment insurance.

It also would give the Legislature’s Joint Finance Committee authority to transfer as much as $75 million between different programs for expenditures related to the public health emergency, according to the nonpartisan Legislative Fiscal Bureau (LFB). The transfer could be made during the current COVID-19 public health emergency declared by Evers, or as much as 90 days afterward. It appears to provide a greater role for lawmakers than in some other states that have given governors broad authority.

The need for state action stems in part from provisions in the federal CARES Act. The $2 trillion coronavirus package adopted in late March includes an estimated $1.9 billion for Wisconsin state government and $360.6 million more for Milwaukee County, Dane County, and the city of Milwaukee, according to LFB. A recent LFB memo states that although funds might be received under this provision by the end of the month, they “must be used only for unanticipated expenses due to the public health emergency” and not for covering revenue shortfalls from the economic downturn. There are a number of additional funding streams for state and local government in the act.

The LFB and legislative leaders have pointed out that state law gives Evers broad authority to spend additional federal funds for ongoing programs. However, the restrictions in the CARES Act and other federal legislation as well as provisions in current state law may not permit the governor to address all the needs that policymakers identify.

In addition, the state needs to take legislative action to unlock certain additional funds from the federal Families First Coronavirus Response Act for unemployment and Medicaid health care programs serving newly jobless workers. Both Evers and legislative leaders have offered proposals to do that.

The Legislature’s convening in Madison comes as some states are preparing to significantly ramp up public health efforts to track and contain the virus. Leaders in many states, as well as their counterparts at the national level, have outlined the need for dramatically expanded testing, as well as tracing contacts of people who test positive to limit its spread. Leading U.S. public-health officials have said a rapid build-out of infrastructure to enable this could be crucial to allow states and localities to begin easing social-distancing measures, potentially allowing greater economic activity to return.

States including Massachusetts recently have launched programs of contact tracing, which involves public health workers conducting interviews and using other tools to determine who might have come in contact with people who have tested positive for the virus – and then working to ensure those contacts do not spread the virus further.

The Wisconsin Department of Health recently said it has added “more than 120 contact tracers to aid local public health departments who need additional capacity to interview every person confirmed with COVID-19 about anyone they had been in contact with and notify those people.”

The huge threat posed by the COVID-19 crisis has prompted at least half the nation’s statehouses to rapidly debate or pass fiscal measures, including some of unusual size and scope. The urgency comes as state governments may need to dramatically expand some programs, especially in the realm of public health, and to support health care providers facing down a possible deluge of COVID-19 patients.

The governor and lawmakers in Wisconsin have advanced some similar proposals, such as changes to the unemployment insurance and Medicaid programs, that might serve as the basis of a consensus package. On other points, however, there have been significant differences.

Lawmakers on both sides should recognize that their immediate response to the present public health crisis is just the first in a series of tough challenges that will range from the state’s battered economy to its stressed budget. In seeking solutions, leaders may find lessons not just from the content of proposals in other states, but also from the bipartisan approach they have taken.