How Does Wisconsin Differ From Other States? 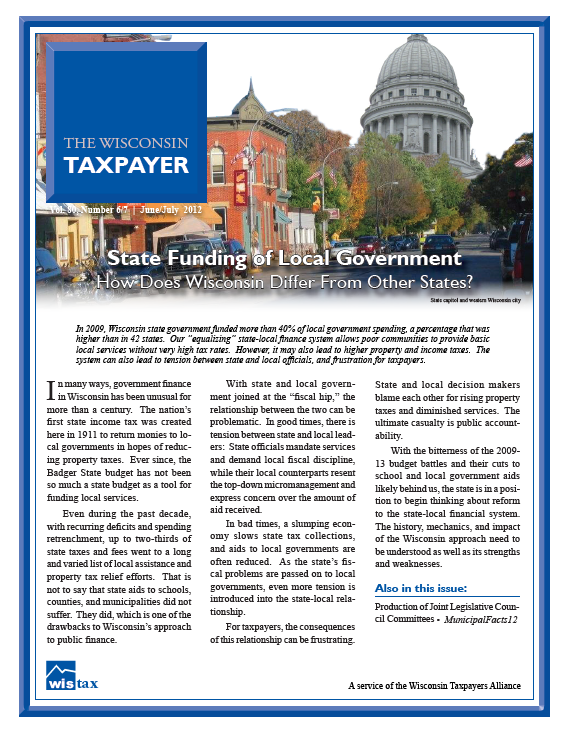 In 2009, Wisconsin state government funded more than 40% of local government spending, a percentage that was higher than in 42 states. Our “equalizing” state-local finance system allows poor communities to provide basic local services without very high tax rates. However, it may also lead to higher property and income taxes. The system can also lead to tension between state and local officials, and frustration for taxpayers.

In many ways, government finance in Wisconsin has been unusual for more than a century. The nation’s first state income tax was created here in 1911 to return monies to local governments in hopes of reducing property taxes. Ever since, the Badger State budget has not been so much a state budget as a tool for funding local services.
Even during the past decade, with recurring deficits and spending retrenchment, up to two-thirds of state taxes and fees went to a long and varied list of local assistance and property tax relief efforts. That is not to say that state aids to schools, counties, and municipalities did not suffer. They did, which is one of the drawbacks to Wisconsin’s approach to public finance.
With state and local government joined at the “fiscal hip,” the relationship between the two can be problematic. In good times, there is tension between state and local leaders: State officials mandate services and demand local fiscal discipline, while their local counterparts resent the top-down micromanagement and express concern over the amount of aid received.
In bad times, a slumping economy slows state tax collections, and aids to local governments are often reduced. As the state’s fiscal problems are passed on to local governments, even more tension is introduced into the state-local relationship.
For taxpayers, the consequences of this relationship can be frustrating. State and local decision makers blame each other for rising property taxes and diminished services. The ultimate casualty is public accountability.
With the bitterness of the 2009-13 budget battles and their cuts to school and local government aids likely behind us, the state is in a position to begin thinking about reform to the state-local financial system. The history, mechanics, and impact of the Wisconsin approach need to be understood as well as its strengths and weaknesses.