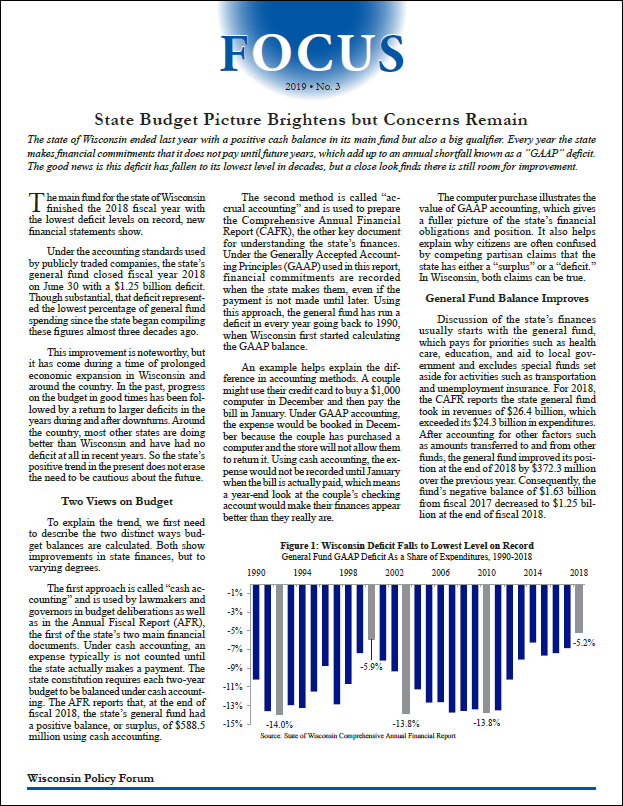 The state of Wisconsin ended last year with a positive cash balance in its main fund but also a big qualifier. Every year the state makes financial commitments that it does not pay until future years, which add up to an annual shortfall known as a “GAAP” deficit. The good news is this deficit has fallen to its lowest level in decades, but a close look finds there is still room for improvement.

The main fund for the state of Wisconsin finished the 2018 fiscal year with the lowest deficit levels on record, new financial statements show.

Under the accounting standards used by publicly traded companies, the state’s general fund closed fiscal year 2018 on June 30 with a $1.25 billion deficit. Though substantial, that deficit represented the lowest percentage of general fund spending since the state began compiling these figures almost three decades ago.

This improvement is noteworthy, but it has come during a time of prolonged economic expansion in Wisconsin and around the country. In the past, progress on the budget in good times has been followed by a return to larger deficits in the years during and after downturns. Around the country, most other states are doing better than Wisconsin and have had no deficit at all in recent years. So the state’s positive trend in the present does not erase the need to be cautious about the future.

To explain the trend, we first need to describe the two distinct ways budget balances are calculated. Both show improvements in state finances, but to varying degrees.

The first approach is called “cash accounting” and is used by lawmakers and governors in budget deliberations as well as in the Annual Fiscal Report (AFR), the first of the state’s two main financial documents. Under cash accounting, an expense typically is not counted until the state actually makes a payment. The state constitution requires each two-year budget to be balanced under cash accounting. The AFR reports that, at the end of fiscal 2018, the state’s general fund had a positive balance, or surplus, of $588.5 million using cash accounting.

The second method is called “accrual accounting” and is used to prepare the Comprehensive Annual Financial Report (CAFR), the other key document for understanding the state’s finances. Under the Generally Accepted Accounting Principles (GAAP) used in this report, financial commitments are recorded when the state makes them, even if the payment is not made until later. Using this approach, the general fund has run a deficit in every year going back to 1990, when Wisconsin first started calculating the GAAP balance.

An example helps explain the difference in accounting methods. A couple might use their credit card to buy a $1,000 computer in December and then pay the bill in January. Under GAAP accounting, the expense would be booked in December because the couple has purchased a computer and the store will not allow them to return it. Using cash accounting, the expense would not be recorded until January when the bill is actually paid, which means a year-end look at the couple’s checking account would make their finances appear better than they really are.

The computer purchase illustrates the value of GAAP accounting, which gives a fuller picture of the state’s financial obligations and position. It also helps explain why citizens are often confused by competing partisan claims that the state has either a “surplus” or a “deficit.” In Wisconsin, both claims can be true.

Discussion of the state’s finances usually starts with the general fund, which pays for priorities such as health care, education, and aid to local government and excludes special funds set aside for activities such as transportation and unemployment insurance. For 2018, the CAFR reports the state general fund took in revenues of $26.4 billion, which exceeded its $24.3 billion in expenditures. After accounting for other factors such as amounts transferred to and from other funds, the general fund improved its position at the end of 2018 by $372.3 million over the previous year.

When taken as a share of general fund expenditures, the GAAP deficit improved from -6.9% in 2017 to -5.2% in 2018. (See Figure 1.) That was the best year on record, edging out 2000 when the deficit amounted to -5.9% of expenditures. Adjusting past deficit amounts for inflation yields a similar trend.

Despite this improvement, other states generally have better GAAP balances. In 2016, Wisconsin was one of just five states to report a general fund deficit in its CAFR.

Looking to Next Budget

The state’s positive cash balance in the general fund and its negative GAAP balance are worth considering ahead of the upcoming budget deliberations. For years, state officials have committed to pay for property tax credits, aid to local governments, and health care services in one fiscal year but then delayed those payments until the next. The result has made it easier to balance the state budget in the short run according to cash accounting, but has lowered the GAAP balance and also made it harder to balance the next budget.

Looking ahead, the state is projecting that it will finish 2019 with a larger $691.5 million balance according to cash accounting. No projection is given for the GAAP deficit but it tends to improve along with the state’s cash balance. Some policymakers likely will use cash accounting to argue the state has “surplus” dollars to spend on tax cuts or priorities such as K-12 education. Others will insist that, while progress is being made, the state is still making more commitments each year than it can pay.

Past experience in Wisconsin shows the current positive trend could still change. The last time GAAP deficit levels were close to this low was in 2000. That year came at the peak of an economic cycle and preceded both a recession and a decline in the general fund GAAP balance, which hit -$2.24 billion in 2003 and bottomed out at -$3 billion in 2011. Given the relatively favorable economy, Wisconsin leaders may want to consider further improvements to the GAAP balance in order to avoid a return to large deficits in more difficult times.