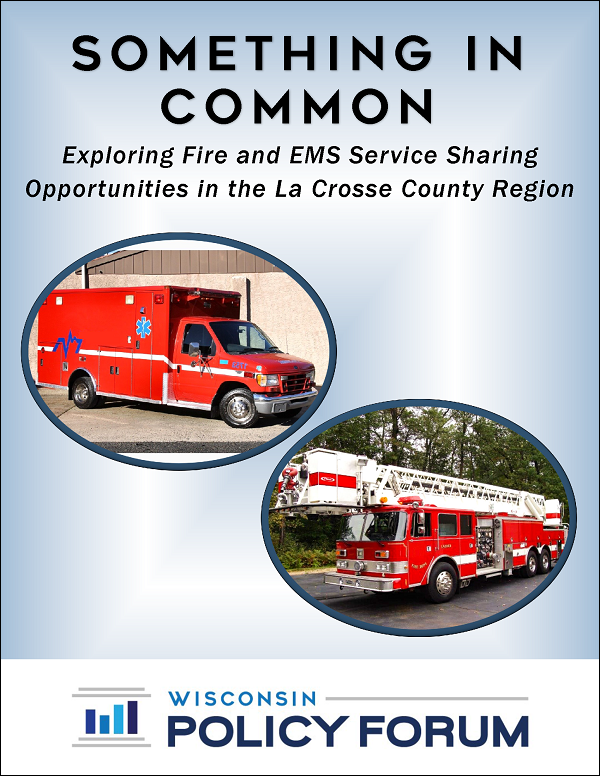 It is at times of crisis that citizens recognize more than ever the value of highly-functioning emergency response departments and systems. During such times, exemplified by the current COVID-19 pandemic, not only is it critical to have sufficient numbers of well-trained personnel and appropriate equipment, but the value of cooperation and coordination among neighboring public safety and health agencies also becomes more pronounced.

Even before the pandemic, efforts to explore enhanced service sharing and cooperation among regional fire and emergency medical services (EMS) providers were becoming more common in Wisconsin and across the nation. For example, the North Shore Fire Department in Milwaukee County has received national attention as an example of a highly successful consolidated fire department that has seen improved service at a lower cost since its creation in 1995. The South Shore Fire Department in Racine County and Western Lakes Fire District in Waukesha County also have demonstrated the benefits that can accrue from fire and rescue consolidation. Other communities have stopped short of consolidation but have developed strong mutual and automatic aid agreements among neighboring jurisdictions.

One reason for the increased attention to service sharing in Wisconsin is the strict property tax levy limits facing municipalities and the substantial share of municipal budgets devoted to fire and EMS services, which have threatened the ability of many communities to keep up with growing service demands. Yet, while service sharing may provide opportunities for fiscal savings from economies of scale, the Wisconsin Policy Forum has found that a more compelling rationale is the potential for municipalities to enhance service levels and keep up with capital needs at a cost that would be far lower than if they attempted to do so individually.

For smaller communities in particular, service sharing or consolidation may offer an opportunity to secure full-time fire and EMS service capacity for a price tag that would not be affordable if pursued independently. Meanwhile, for larger communities facing service expansion demands, such strategies may offer the opportunity to spread the cost of such expansion while providing a higher level of service across a broader geographic area.

La Crosse County and the La Crosse Area Planning Committee (LAPC) jointly commissioned this report to explore options for enhanced service sharing and consolidation of services among the various fire departments and EMS providers in La Crosse County, as well as in the neighboring city of La Crescent in Minnesota. The decision to do so followed two initial planning meetings of the LAPC that were sponsored and financially supported by the University of Wisconsin-La Crosse. At those meetings, municipal leaders and public and private sector fire and EMS officials were invited to discuss the need for such a project and its scope. Continue reading…