A look at how cities are reimbursed

As municipalities throughout Wisconsin ramp up work on their annual budgets, they face the largest gap on record in state reimbursements for costs they incur in serving state facilities. Estimated municipal costs for services such as fire protection, police, and waste removal rose sharply in the last decade, while state leaders decreased funding for the program that provides reimbursement. State budget challenges amid the COVID-19 crisis could entrench or even add to the problem.

State funding to reimburse municipalities for services linked to state-owned facilities was about $18.6 million in 2019, or 34.7% of what communities were eligible to receive — the smallest share on record (see Figure 1). This resulted in a total funding gap of more than $35 million for municipalities last year.

While municipalities derive many benefits from state facilities, including a boost to their local workforce and potentially to their tax base indirectly, they may not have their full costs directly covered by the state. The Municipal Services Payments (MSP) program is intended to prevent local taxpayers, who fund the bulk of municipal service costs, from having to subsidize them for the state through the property tax.

The city of Madison, with its concentration of state facilities, is the municipality receiving by far the most funding from the program: nearly $8.4 million in 2019. But 361 municipalities received a payment of some amount in 2019, and many received sizable sums, especially those with college campuses or state prisons.

Others in the top 10 in funding from the program are Milwaukee, Oshkosh, La Crosse, Eau Claire, Green Bay, Stevens Point, Superior, River Falls, and Whitewater. In total, 24 municipalities got more than $100,000 each from the program in 2019. On a per-capita basis, three of the top four payment recipients are small municipalities: the city of Mauston, village of Camp Douglas in Juneau County, and town of La Pointe in Ashland County.

While small in the context of the amount spent by municipalities throughout the state, these funding gaps matter to municipalities that rely more heavily on the program. They could also be increasingly salient as municipalities make difficult choices to finalize their 2021 budgets amid the COVID-19 crisis.

The Department of Administration administers the MSP program and uses a formula to calculate what the agency calls “entitlements,” or the amount of reimbursement earned by each municipality.

The payments offset the share of the cost of providing fire, police, and waste removal services to state facilities that otherwise would be borne by local property taxpayers. Other municipal services to state facilities, such as water, sewer, or electrical, are paid for by the responsible state agency in the form of user fees. While counties may not receive direct payments under the program for services such as law enforcement, they may be repaid indirectly through an inter-governmental agreement with the municipality where the state facility is located.

Statewide, the program accounts for a mere 0.3% of total general revenues for all Wisconsin municipalities. But for some communities, the unreimbursed cost can be significant (see Figure 2). For example, Madison’s unpaid amount in 2019 was nearly $15.8 million, or about twice the $7.9 million the city expects to collect in 2020 from a new $40 per vehicle registration fee.

If state policymakers appropriate less funding for the program than the total amount of entitlements – as has been the case since 1982 – available funding is prorated. Gov. Tony Evers, a Democrat, maintained a freeze on funding for the program in his proposed 2019-21 state budget and the GOP-controlled Legislature approved his recommendation.

Based on available funding, municipalities in 2019 were slated to get a combined total of $18.6 million out of the $53.6 million in their total entitlements, according to a November DOA report to the Legislature’s Joint Finance Committee.

Our analysis found municipalities’ entitlements, for which fire and police are by far the largest components, rose by more than 74% in the last decade. This is a consequence of several factors, starting with the increasing costs to municipalities to provide those services. Other factors are that a growing share of those services are being supported at the municipal level by the property tax instead of state aid, and an increasing ratio of the property values of state facilities to the combined value of all buildings and improvements in the municipalities – a key component of the state’s formula.

This trend toward a widening funding gap began under the last budget signed by former Gov. Jim Doyle, then accelerated during the eight years under former Gov. Scott Walker. In 2008, municipalities got actual payments totaling nearly $22 million, or 81.1% of their entitlements under this program.

In Doyle’s final budget, with state finances under duress from a recession in 2009, that payment was cut to $20.6 million. Meanwhile, entitlements increased significantly starting in this period. The Legislative Fiscal Bureau attributes recent increases to rising police and fire service costs, as well as to “increases in the value of state facilities that outpaced increases in private real estate values, particularly due to the construction of additional state facilities in the city of Madison.”

The formula used to calculate MSP entitlements increases a municipality’s entitlement if there is an increase in the ratio of the property value of its state facilities to the values of all of its private real estate improvements, such as buildings. Land values, private or public, are not included in the state’s formula and neither are state highways. In the municipalities receiving payments, this statewide ratio increased in the last decade, from about 5.4% in 2009 to about 7.2% in 2019.

In one key example, the city of Madison in recent years saw the construction of large facilities such as the Hill Farms state office building and numerous buildings on the University of Wisconsin-Madison campus. This caused Madison’s ratio of state facility values to those of all real estate improvements to increase from 20% in 2009 to 23.8% in 2019. 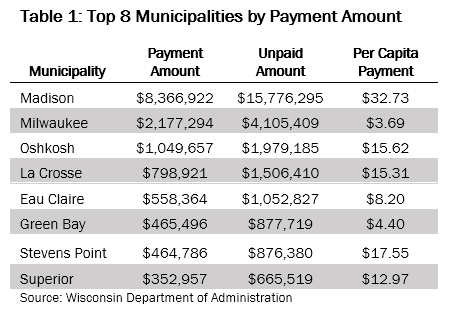 Madison’s concentration of state facilities means it gets about 45% of the total program funding, about $8.4 million in 2019 (see Table 1). The city also receives more funding from the program because Madison depends more heavily than most municipalities on property taxes to fund its services and receives less in the kinds of state aid payments that would reduce its MSP entitlements. The share of overall funding for the program that Madison receives ticked up modestly in the last decade, from 42.7% to 45%.

Even before the COVID-19 crisis, Wisconsin legislators and governors of both parties have made a choice in the last decade to make funding for the MSP program a lower priority relative to other budgeting needs. Some have argued, and not without cause, that state facilities bring benefits to a community such as stable, middle class jobs that help to offset the additional costs of providing services to those properties.

Given the long-term trend and the likelihood that state fiscal challenges might grow in light of the economic impacts of the coronavirus, the prospects for increased funding for the program in the next state budget in 2021 appear dubious and even some of the existing dollars could be at risk.

A legitimate case can be made that, by locating jobs in these municipalities, the state is already giving them their fair share of resources. The flipside is that the reimbursement levels that some municipalities once enjoyed have lagged as their other fiscal pressures have grown, and that those levels may not appropriately account for costs they incur to provide essential services to large facilities such as prisons or universities.

Residents in these communities may need to understand and accept some level of higher property taxes in exchange for the benefit of housing state properties. Still, state officials may want to consider the recent trend as they seek to balance larger competing priorities and make tough budgeting decisions in the year ahead.