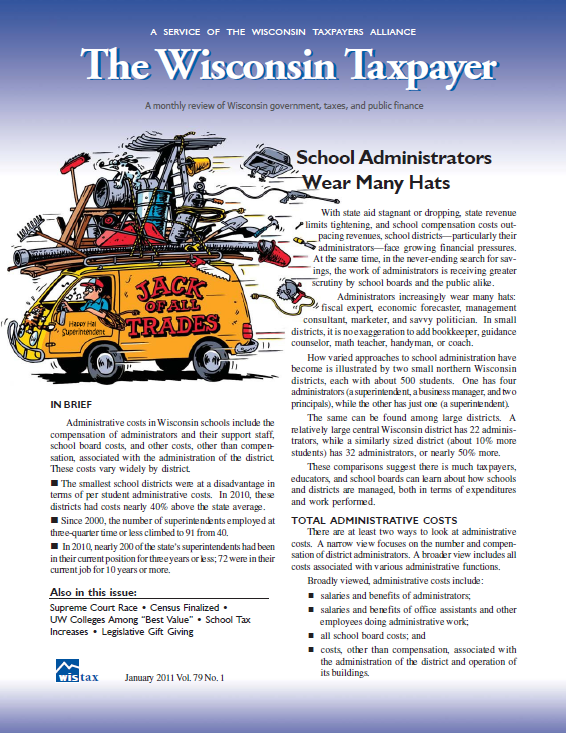 Administrative costs in Wisconsin schools include the compensation of administrators and their support staff, school board costs, and other costs, other than compensation, associated with the administration of the district. These costs vary widely by district.

With state aid stagnant or dropping, state revenue limits tightening, and school compensation costs outpacing revenues, school districts—particularly their administrators—face growing financial pressures. At the same time, in the never-ending search for savings, the work of administrators is receiving greater scrutiny by school boards and the public alike.
Administrators increasingly wear many hats: fiscal expert, economic forecaster, management consultant, marketer, and savvy politician. In small districts, it is no exaggeration to add bookkeeper, guidance counselor, math teacher, handyman, or coach.
How varied approaches to school administration have become is illustrated by two small northern Wisconsin districts, each with about 500 students. One has four administrators (a superintendent, a business manager, and two principals), while the other has just one (a superintendent).
The same can be found among large districts. A relatively large central Wisconsin district has 22 administrators, while a similarly sized district (about 10% more students) has 32 administrators, or nearly 50% more.
These comparisons suggest there is much taxpayers, educators, and school boards can learn about how schools and districts are managed, both in terms of expenditures and work performed.