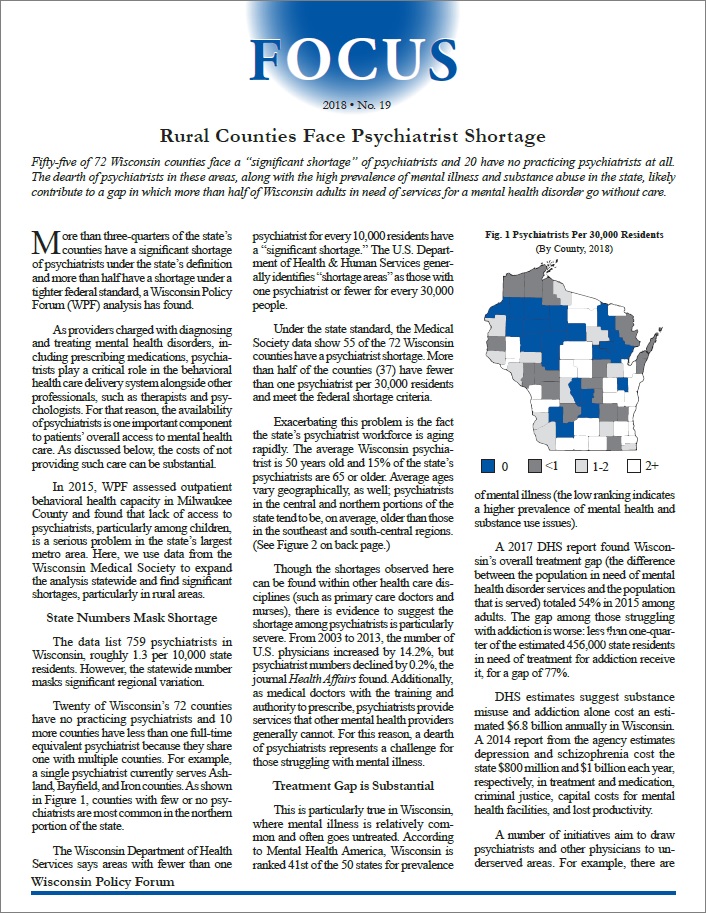 Fifty-five of 72 Wisconsin counties face a “significant shortage” of psychiatrists and 20 have no practicing psychiatrists at all. The dearth of psychiatrists in these areas, along with the high prevalence of mental illness and substance abuse in the state, likely contribute to a gap in which more than half of Wisconsin adults in need of services for a mental health disorder go without care.

More than three-quarters of the state’s counties have a significant shortage of psychiatrists under the state’s definition and more than half have a shortage under a tighter federal standard, a Wisconsin Policy Forum (WPF) analysis has found.

As providers charged with diagnosing and treating mental health disorders, including prescribing medications, psychiatrists play a critical role in the behavioral health care delivery system alongside other professionals, such as therapists and psychologists. For that reason, the availability of psychiatrists is one important component to patients’ overall access to mental health care. As discussed below, the costs of not providing such care can be substantial.

In 2015, WPF assessed outpatient behavioral health capacity in Milwaukee County and found that lack of access to psychiatrists, particularly among children, is a serious problem in the state’s largest metro area. Here, we use data from the Wisconsin Medical Society to expand the analysis statewide and find significant shortages, particularly in rural areas.

Under the state standard, the Medical Society data show 55 of the 72 Wisconsin counties have a psychiatrist shortage. More than half of the counties (37) have fewer than one psychiatrist per 30,000 residents and meet the federal shortage criteria.

Though the shortages observed here can be found within other health care disciplines (such as primary care doctors and nurses), there is evidence to suggest the shortage among psychiatrists is particularly severe. From 2003 to 2013, the number of U.S. physicians increased by 14.2%, but psychiatrist numbers declined by 0.2%, the journal Health Affairs found. Additionally, as medical doctors with the training and authority to prescribe, psychiatrists provide services that other mental health providers generally cannot. For this reason, a dearth of psychiatrists represents a challenge for those struggling with mental illness.

A 2017 DHS report found Wisconsin’s overall treatment gap (the difference between the population in need of mental health disorder services and the population that is served) totaled 54% in 2015 among adults. The gap among those struggling with addiction is worse: less than one-quarter of the estimated 456,000 state residents in need of treatment for addiction receive it, for a gap of 77%.

Going forward, policymakers may want to consider increasing psychiatry residency class sizes or rural psychiatry residency programs, as approximately half of medical residents practice within the state in which they trained. In addition, expanding the use of integrated care models and of telemedicine for both patients and other health care providers could help to widen the reach of the existing psychiatrist workforce.