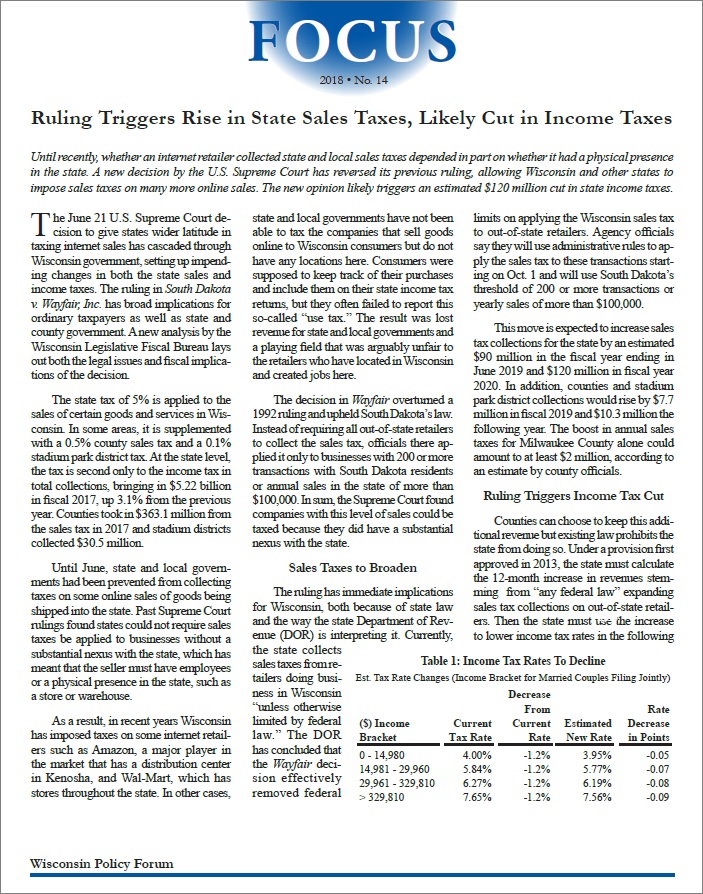 Until recently, whether an internet retailer collected state and local sales taxes depended in part on whether it had a physical presence in the state. A new decision by the U.S. Supreme Court has reversed its previous ruling, allowing Wisconsin and other states to impose sales taxes on many more online sales. The new opinion likely triggers an estimated $120 million cut in state income taxes.

The June 21 U.S. Supreme Court decision to give states wider latitude in taxing internet sales has cascaded through Wisconsin government, setting up impending changes in both the state sales and income taxes. The ruling in South Dakota v. Wayfair, Inc. has broad implications for ordinary taxpayers as well as state and county government. A new analysis by the Wisconsin Legislative Fiscal Bureau lays out both the legal issues and fiscal implications of the decision.

The state tax of 5% is applied to the sales of certain goods and services in Wisconsin. In some areas, it is supplemented with a 0.5% county sales tax and a 0.1% stadium park district tax. At the state level, the tax is second only to the income tax in total collections, bringing in $5.22 billion in fiscal 2017, up 3.1% from the previous year. Counties took in $363.1 million from
the sales tax in 2017 and stadium districts collected $30.5 million.

Until June, state and local governments had been prevented from collecting taxes on some online sales of goods being shipped into the state. Past Supreme Court rulings found states could not require sales taxes be applied to businesses without a substantial nexus with the state, which has meant that the seller must have employees or a physical presence in the state, such as a store or warehouse.

As a result, in recent years Wisconsin has imposed taxes on some internet retailers such as Amazon, a major player in the market that has a distribution center in Kenosha, and Wal-Mart, which has stores throughout the state. In other cases, state and local governments have not been able to tax the companies that sell goods online to Wisconsin consumers but do not have any locations here. Consumers were supposed to keep track of their purchases and include them on their state income tax returns, but they often failed to report this so-called “use tax.” The result was lost revenue for state and local governments and a playing field that was arguably unfair to the retailers who have located in Wisconsin and created jobs here.

The decision in Wayfair overturned a 1992 ruling and upheld South Dakota’s law. Instead of requiring all out-of-state retailers to collect the sales tax, officials there applied it only to businesses with 200 or more transactions with South Dakota residents or annual sales in the state of more than $100,000. In sum, the Supreme Court found companies with this level of sales could be taxed because they did have a substantial nexus with the state.

The ruling has immediate implications for Wisconsin, both because of state law and the way the state Department of Revenue (DOR) is interpreting it. Currently, the state collects sales taxes from retailers doing business in Wisconsin “unless otherwise limited by federal law.” The DOR has concluded that the Wayfair decision effectively removed federal limits on applying the Wisconsin sales tax to out-of-state retailers. Agency officials say they will use administrative rules to apply the sales tax to these transactions starting on Oct. 1 and will use South Dakota’s threshold of 200 or more transactions or yearly sales of more than $100,000.

This move is expected to increase sales tax collections for the state by an estimated $90 million in the fiscal year ending in June 2019 and $120 million in fiscal year 2020. In addition, counties and stadium park district collections would rise by $7.7 million in fiscal 2019 and $10.3 million the following year. The boost in annual sales taxes for Milwaukee County alone could amount to at least $2 million, according to an estimate by county officials.

Counties can choose to keep this additional revenue but existing law prohibits the state from doing so. Under a provision first approved in 2013, the state must calculate the 12-month increase in revenues stemming from “any federal law” expanding sales tax collections on out-of-state retailers. Then the state must use the increase to lower income tax rates in the following year. (See Table 1.) State lawmakers were anticipating an act of Congress to expand sales tax collections, but the Supreme Court ruling and state response also could trigger an estimated $120 million reduction in income taxes. 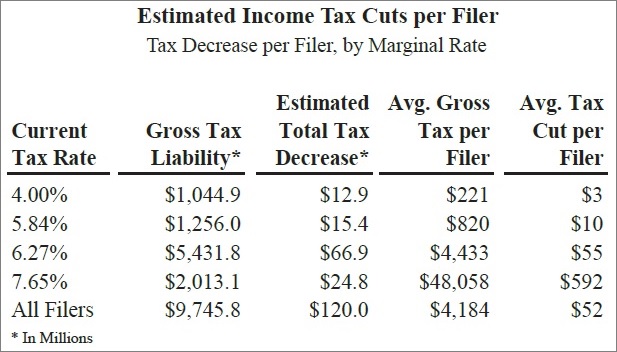 The cut could average out to $52 per state income tax filer. Under current law, the overall decrease would be apportioned to taxpayers in the state’s four brackets according to the total taxes paid by filers in each. Table 2 shows taxpayers in the bottom bracket (married couples filing jointly making less than $14,981) could see an average decrease of $3, and couples in the top bracket (with incomes above $329,810) would average a cut of $592.

The Table 1 and 2 estimates come from a DOR simulation done for the 2017 tax year and may not reflect the exact impact of a potential tax decrease made in 2020. The gross tax liability listed for each bracket is for the filers whose highest marginal rate corresponds to that bracket and does not represent the liability generated by the rate for each bracket.

This income tax cut won’t happen immediately – the state still must calculate how much new money will be collected. This delay will give the next governor and legislature time to consider whether to keep, drop, or reshape this income tax cut in the next state budget.