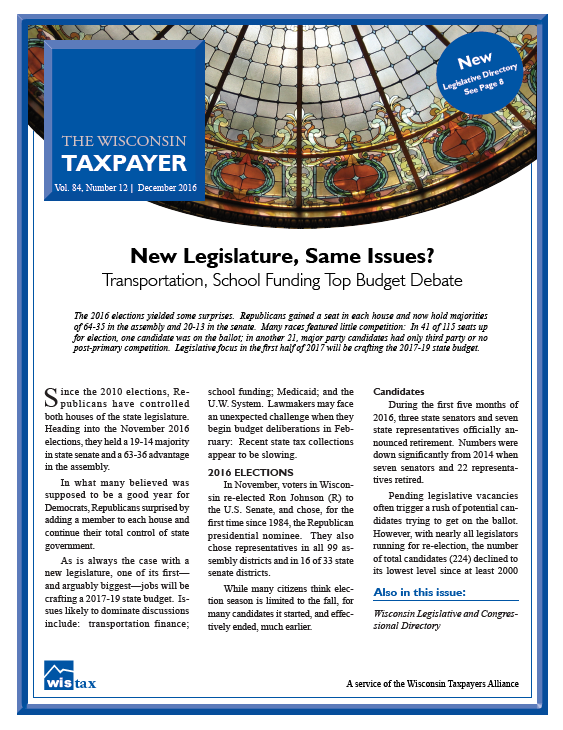 The 2016 elections yielded some surprises. Republicans gained a seat in each house and now hold majorities of 64-35 in the assembly and 20-13 in the senate. Many races featured little competition: In 41 of 115 seats up for election, one candidate was on the ballot; in another 21, major party candidates had only third party or no post-primary competition. Legislative focus in the first half of 2017 will be crafting the 2017-19 state budget.

Since the 2010 elections, Republicans have controlled both houses of the state legislature. Heading into the November 2016 elections, they held a 19-14 majority in state senate and a 63-36 advantage in the assembly.
In what many believed was supposed to be a good year for Democrats, Republicans surprised by adding a member to each house and continue their total control of state government.
As is always the case with a new legislature, one of its first—and arguably biggest—jobs will be crafting a 2017-19 state budget. Issues likely to dominate discussions include: transportation finance; school funding; Medicaid; and the U.W. System. Lawmakers may face an unexpected challenge when they begin budget deliberations in February: Recent state tax collections appear to be slowing.
2016 ELECTIONS
In November, voters in Wisconsin re-elected Ron Johnson (R) to the U.S. Senate, and chose, for the first time since 1984, the Republican presidential nominee. They also chose representatives in all 99 assembly districts and in 16 of 33 state senate districts.
While many citizens think election season is limited to the fall, for many candidates it started, and effectively ended, much earlier.