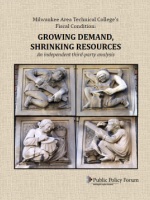 The Milwaukee Area Technical College (MATC) is one of the largest local taxpayer-funded entities in southeastern Wisconsin, ranking fourth in assets and budget behind Milwaukee County, the Milwaukee Public Schools, and the City of Milwaukee. The college’s fiscal operations are complex and draw on multiple revenue sources, including nearly $150 million in property taxes annually. This report provides an analysis of the fiscal condition of MATC. It constitutes the third in an ongoing series of fiscal assessments of local taxpayer-funded governments and institutions conducted by the Public Policy Forum. The first was an evaluation of the finances of Milwaukee County government published in March 2009, while the second was an evaluation of the City of Milwaukee government published in September 2009.