Local governments turn to “wheel taxes” as other revenues lag 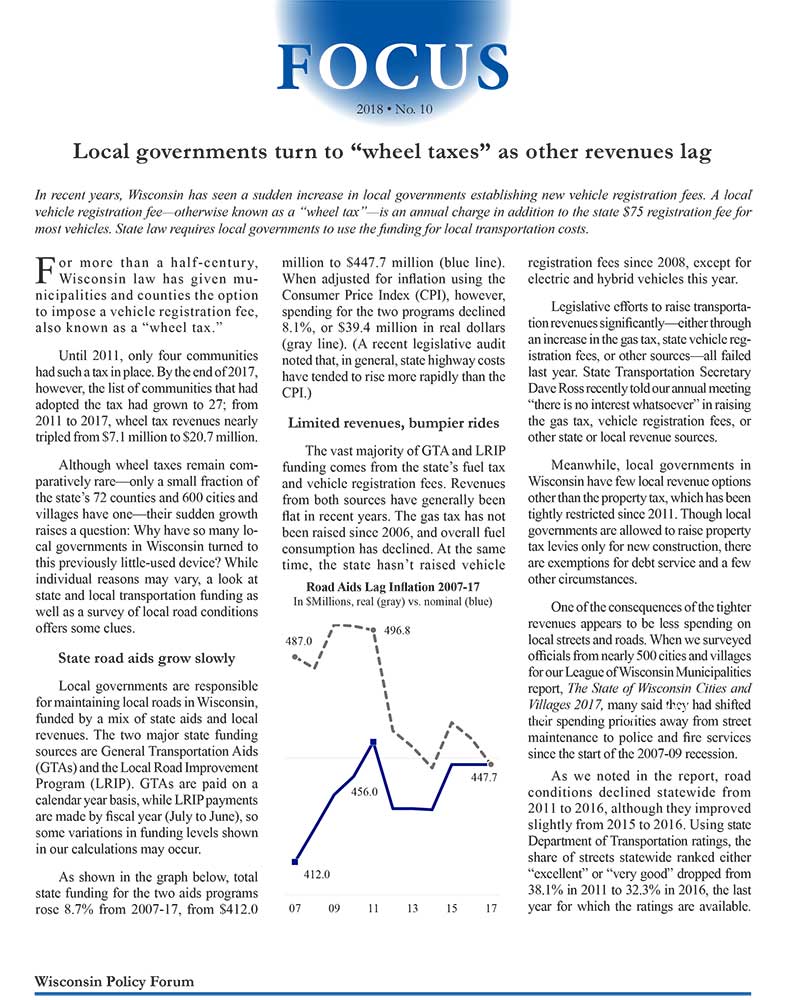 For more than a half-century, Wisconsin law has given municipalities and counties the option to impose a vehicle registration fee, also known as a “wheel tax.”

Although wheel taxes remain comparatively rare–only a small fraction of the state’s 72 counties and 600 cities and villages have one–their sudden growth raises a question: Why have so many local governments in Wisconsin turned to this previously little-used device? While individual reasons may vary, a look at state and local transportation funding as well as a survey of local road conditions offers some clues.

Local governments are responsible for maintaining local roads in Wisconsin, funded by a mix of state aids and local revenues. The two major state funding sources are General Transportation Aids (GTAs) and the Local Road Improvement Program (LRIP). GTAs are paid on a calendar year basis, while LRIP payments are made by fiscal year (July to June), so some variations in funding levels shown in our calculations may occur.

As shown in the graph below, total state funding for the two aids programs rose 8.7% from 2007-17, from $412.0 million to $447.7 million (blue line). When adjusted for inflation using the Consumer Price Index (CPI), however, spending for the two programs declined 8.1%, or $39.4 million in real dollars (gray line). (A recent legislative audit noted that, in general, state highway costs have tended to rise more rapidly than the CPI.)

The vast majority of GTA and LRIP funding comes from the state’s fuel tax and vehicle registration fees. Revenues from both sources have generally been at in recent years. The gas tax has not been raised since 2006, and overall fuel consumption has declined. At the same time, the state hasn’t raised vehicle registration fees since 2008, except for electric and hybrid vehicles this year. 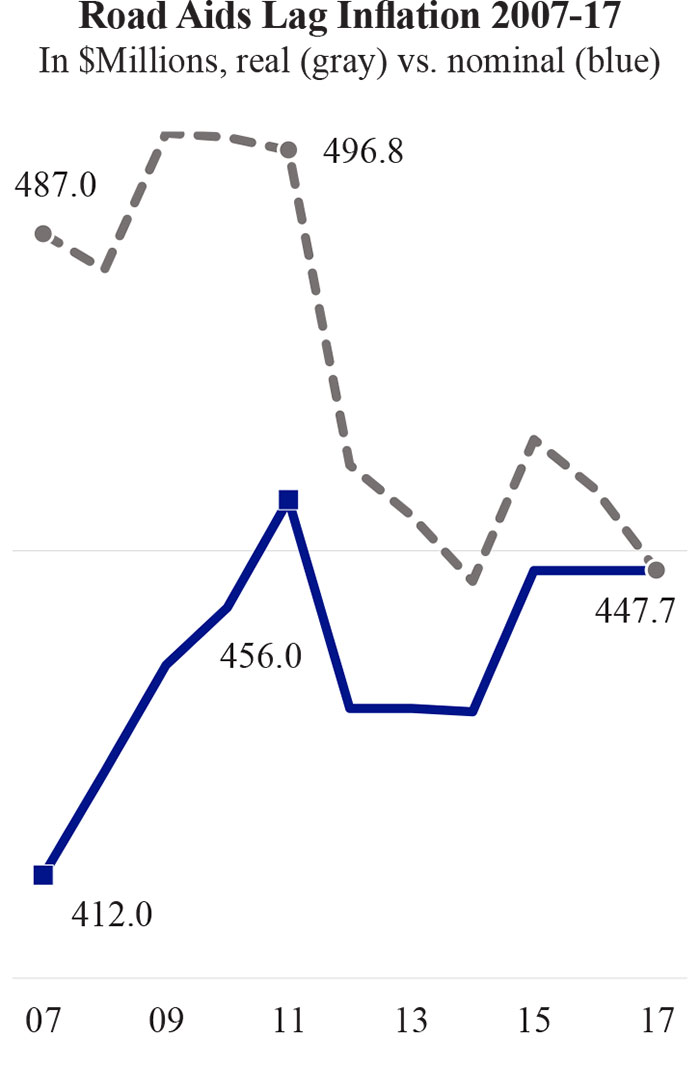 Meanwhile, local governments in Wisconsin have few local revenue options other than the property tax, which has been tightly restricted since 2011. Though local governments are allowed to raise property tax levies only for new construction, there are exemptions for debt service and a few other circumstances.

One of the consequences of the tighter revenues appears to be less spending on local streets and roads. When we surveyed officials from nearly 500 cities and villages for our League of Wisconsin Municipalities report, The State of Wisconsin Cities and Villages 2017, many said they had shifted their spending priorities away from street maintenance to police and fire services since the start of the 2007-09 recession.

As we noted in the report, road conditions declined statewide from 2011 to 2016, although they improved slightly from 2015 to 2016. Using state Department of Transportation ratings, the share of streets statewide ranked either “excellent” or “very good” dropped from 38.1% in 2011 to 32.3% in 2016, the last year for which the ratings are available.

Against this backdrop, the appeal of the wheel tax becomes clearer. There appears no clear pattern among the local governments that have adopted the tax, which include the state’s two largest counties (Milwaukee and Dane) as well as some of its smallest (Green, Lincoln, and Iowa); some of the largest cities (Milwaukee, Appleton), as well as some of the smallest municipalities (City of Lodi, Town of Arena).

Like other local revenues, the state still imposes some restrictions on the wheel tax, requiring that it be spent only on transportation. Although this might appear to limit its usefulness, the new tax can be used to offset other revenues, such as property taxes or state aids.

As wheel taxes become more common, policymakers may want to consider whether they are the ideal tax source to support local roads. It may be argued that by taxing vehicle owners, the wheel tax links the costs of local roads to users. Conversely, some might argue that road users also include commuters and visitors and a consumption tax (such as a sales tax) might be more appropriate. Such a debate cannot occur because state law does not permit municipalities to levy sales taxes, and most counties already have implemented the optional 0.5% sales tax.

As more local governments consider the wheel tax, some state officials have already suggested additional limits on it may be needed. In the meantime, however, its use may grow as long as local revenues are limited and demand for local road maintenance and improvements expands.

◾ Gov. Walker (R) has told most state agencies to prepare their 2019-21 bud- get requests with no increases in state funding. The budget directions are the first step in developing the biennial state budget.

In a letter to agencies, the governor said he was exempting K-12 school aids from the caps and allowing cost- to-continue increases for state prisons and other institutions, Medicaid, child protective services in Milwaukee and statewide, and the Division of Vocational Rehabilitation. Walker also told agencies funded with segregated revenues, such as the Department of Transportation and the state lottery, to comply with the no-increase requirements.

◾ An executive order signed by Gov. Walker requires the Department of Administration (DOA) to implement several “lean government” measures to reduce costs and streamline state operations. They include requiring DOA to review, stabilize, and reduce so-called “chargebacks” for DOA services to state agencies; consolidating agency printing and mailing operations; reducing the use of outside contractors for state services; increasing state vehicle mileage and age requirements before replacement; and better calculating travel costs.